Should You Pull: Darkness Within Edition 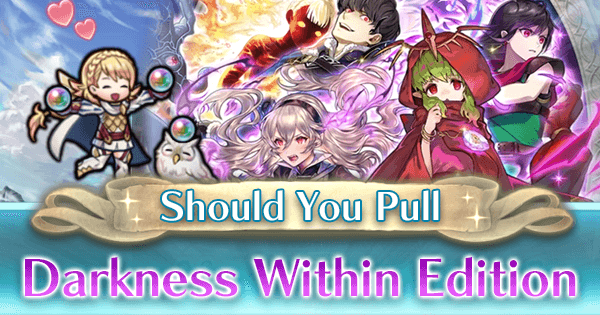 Mareeta is the latest myrmidon archetype in the game and true to form, she manages to better most of those who come before her due to the recently-increased base stat total for infantry units. Her statline is almost identical to Mia’s own, but with additional Speed, Attack, Defense and HP for the trade-off of 2 Resistance. There isn’t much more to say about her stats, as we’ve seen them before with other myrmidons in the game.

Compared with the five star Mia

Mareeta is our newest swordswoman and, true to form, she is a powerhouse. Her base kit alone allows her to proc a powerful Luna against her opponent, add a flat 10 damage, and deny them a skill-granted followup which makes them very unlikely to kill her on counter, if they even survive her first attack in the first place. Of course, this is all reliant on her Speed stat- if she can't double her opponents normally or if her Speed is lower than her opponent, then she loses all of her utility and can't perform nearly as well. Mareeta dances on the edge of a blade, and while she's currently the fastest of all infantry swords, the current trend of oneupsmanship from Intelligent Systems makes us doubtful that she will remain unchallenged for long.

Berkut has the highest combined Defense and Resistance stats of all cavalry units upon his release, with excellent comparative values in both stats. His bulk is comparative to an armored unit, which can be paired with his mobility and base kit to make him extremely tanky in combat.

Berkut has an impressive Attack stat to match at 35, among the highest Attack values for cavalry units. However, this doesn’t come without a cost- his Speed matches Hrid’s for the lowest Speed cavalry in the game. Because Berkut will always be doubled, he must either rely on his high Attack to oneshot his opponent before they can hit him twice, or rely on his bulk to withstand the onslaught of attacks.

Compared with the free Camus

Compared with the four star Silas

Compared with the free Berkut

Surprising many summoners, Berkut makes another debut to Fire Emblem Heroes, this time in his fallen form. Berkut’s new form has succeeded in many ways that his Grand Hero Battle self has failed- firstly, his defenses are vastly better and further bolstered by his newer skills, which allow him to defend himself from both physical and magical threats. Additionally, Fallen Berkut has the ability to counter at range while still retaining his A skill slot, which greatly heightens his abilities in combat.

However, he still has shortcomings. Fallen Berkut will be doubled by most units in the game and must withstand the attacks- something made easier by his natural A slot, which prevents his opponents from activating Specials on him. Additionally, there’s the obvious drawback to his prf, which damages his nearby allies as long as they’re near him when he’s attacked by a ranged unit. Great care must be taken when deploying him, so that he only counters and damages his allies who the Summoner intends to take the hit.

Corrin makes another appearance into the game in her fallen form and despite being an infantry unit, she has comparable base stats to armored units at 173, and actually has more stats than launch armors such as Sheena, Black Knight, and Zephiel, who each have 169. Together, her stats make her exceptionally well-rounded and without the movement drawback that armors have- plus, she has ways of enhancing her stats in her base kit.

Compared with the five star Velouria

I Can’t Hold Back!

On most banners, Fallen Corrin would be the undisputed prize, but considering Fallen Mareeta and Fallen Young Tiki, she is now just simply another unit on this banner. However, don’t let that fool you into thinking that she’s not powerful- with sky-high base stats and a downright broken ability to further stack her stats, Corrin is the standout winner when it comes to the best all-rounder. She is entirely flexible, powerful in whatever role she’s in, and due to her color typing, vulnerable only to anti-dragon weapons.

Fallen Tiki seems to be a mirror of her Legendary self, existing as a colorless armored dragon this time as one of the three 180 BST units in the game (the other two being Legendary Tiki and Winter Fae). There are a few very minor differences between her statline and Legendary Tiki- namely, Fallen Tiki has 2 more Attack and 1 less Speed and Resistance.

Compared with the 5 star Legendary Tiki

Raze It To The Ground

Dream A Little Dream Of Me

Fallen Young Tiki may be uninspired, but she’s certainly extremely effective. With great stats all around, the highest BST in the game, and a prf C slot skill, she is definitely a powerful unit. Her colorless typing is even an advantage for her as well, as she can now take on all dragons with ease without having to worry about weapon triangle disadvantages. There’s practically nothing wrong with her, but all the same- she seems like a reskin of Legendary Tiki, and if you have one, you probably don’t need the other.

December thread
Its December my dudeshttps://www.youtube.com/embed/gaNygARaSb8 Post December stuff…
Second best son is finally +10!
A good boy is finally done! 2 posts - 2 participants Read…
A Day in the Life (The Benefit)
27 posts - 19 participants Read full topic
Merge of Fodder for C Skill?
Click to view the poll. 6 posts - 4 participants Read full…
Hector + Thor = Which B Fighter skill?
With SF not needed, assuming I can get Thor, I was thinking of Crafty (or Hardy… need…
Read More