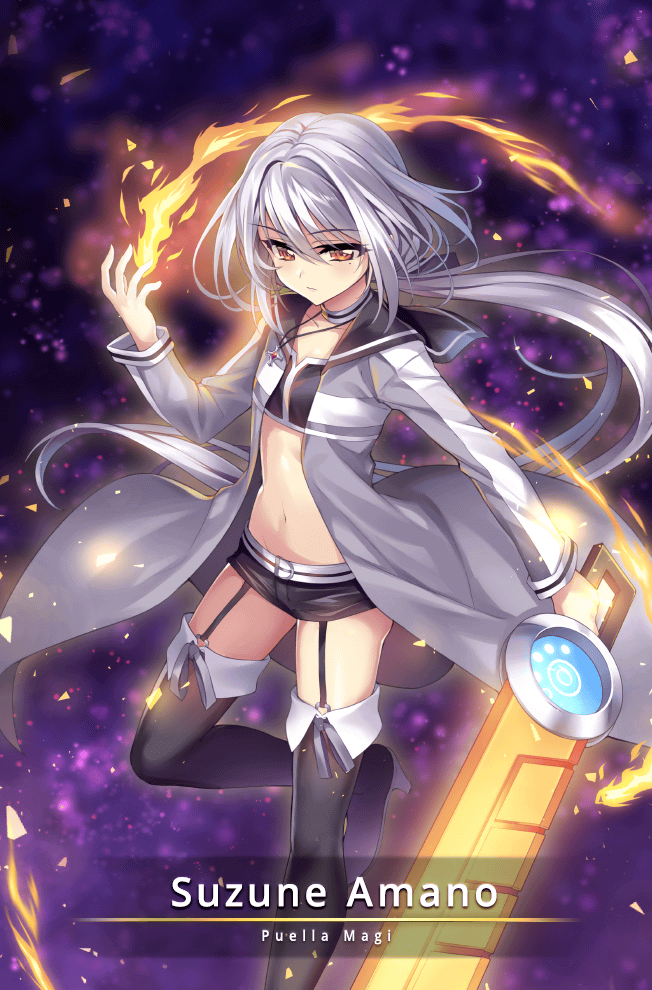 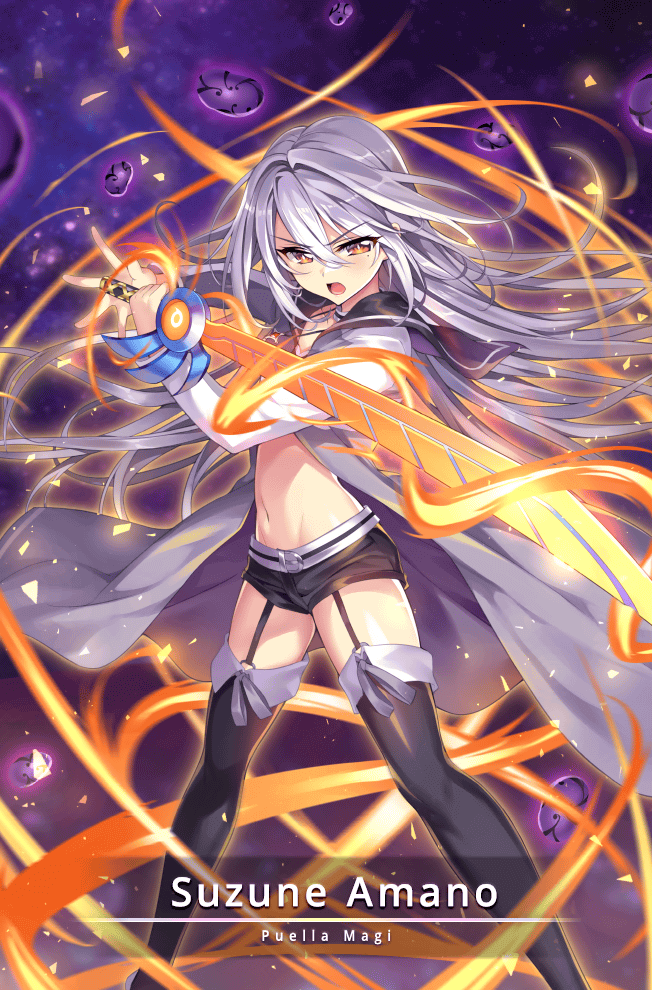 A Magical Girl who recently transferred to Akanegazaki. She has no parents and works part time to make a living. Although amiable and pleasant at school, she bears the cold face of an assassin once classes are over. Her target: Magical Girls. A tragic past lies concealed in her closed off heart. 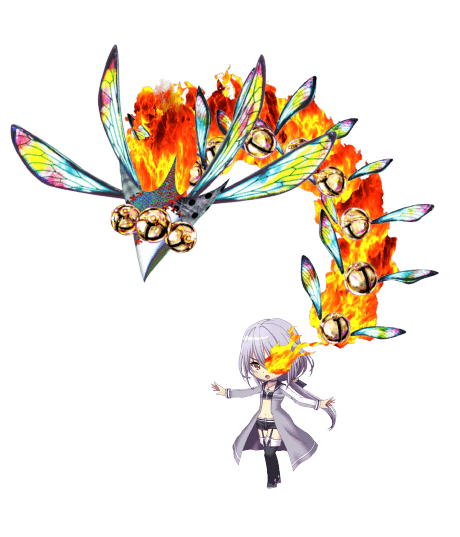 Damage ALL Enemies
Doppel: Deals 902% damage to all enemies.
Burn ALL
Apply Burn to all enemies (3 turns). Burned enemies takes 10% damage per turn and take increased damage from element they're weak against.
Critical Chance
Guranteed Critical Hits (2 turns). Critical Hits deal 2x damage.
Draft & Supervision: Idea/Supervision: GAN
Doppel Detail (May Contain Spoiler)
A flame blazes within the master of this Doppel. It rages with her desire for vengeance, affirming her bond with the woman who once took care of her. While its fiery pillar is meant to exterminate the Witches she loathes so much, it also scorches its host, who bears the burden of a callous fate. Perhaps the fact that it takes the form of a mayfly represents the brevity of its host's life? That may be why its bells reverberate through to the very souls of those who hear them. What does she see beyond the flickering flames? Only she who controls them can say. 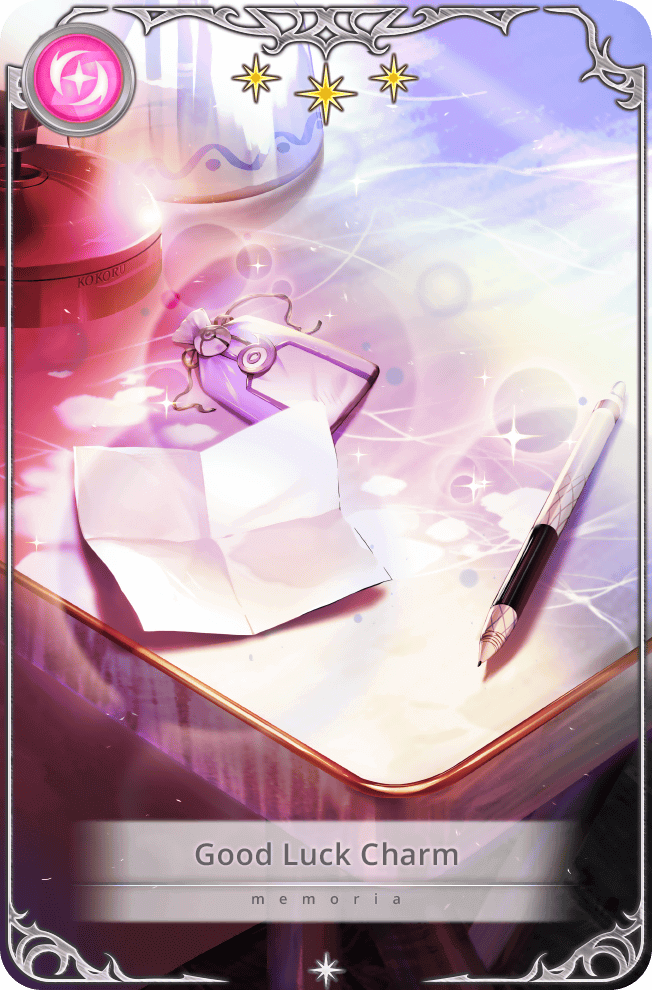 Suzune is an attack type unit, so she has great attack stats and she has the added advantage of three Accele discs (much like Rena Minami). Her connect increases damage as well as increasing critical hit chance so she can really boost the attack power of common magia building teams and works well as an attack unit in non-blast oriented teams.

Suzune's high attack and the fact that her magia hits all enemies on the field allow her to deal out significant damage to all enemies and take large chunks of HP from multi-space bosses. It also grants the burn status effect for added damage at the end of the round.

Suzune's connect has a 70% chance of critical hit and increases damage by 40%. It's basically the connect version of "I Made Friends". However Suzune is also a glass cannon with lower HP and DEF, and may have difficulty surviving long enough to use her Connect at all.

Her personal memoria gives guaranteed critical hits for a single turn and has a cooldown rate of 6/5 turns, making it very viable for Mirrors should you choose to use her (and can keep her alive long enough to use it).

Strong water element Magical Girls are very common in Mirrors, especially the likes of Yachiyo Naname and Nanaka Tokiwa after they get uncapped. This limits her damage output and means she'll likely be among the first on your team to fall. At best you'd be able to take down grass units like Mami Tomoe or Alina Gray with relative ease on the first round which would ensure the longevity of your own water units.

Suzune is an attack unit with three Accele discs. "Midsummer" will take advantage of both of these traits by boosting attack power and increasing MP gain. Memoria that focus on either (or both) of these strategies work best for Suzune.

Her personal memoria is also a good choice since it guarantees a critical hit and has a very low cooldown rate (6/5 turns) that makes it viable for Mirrors. 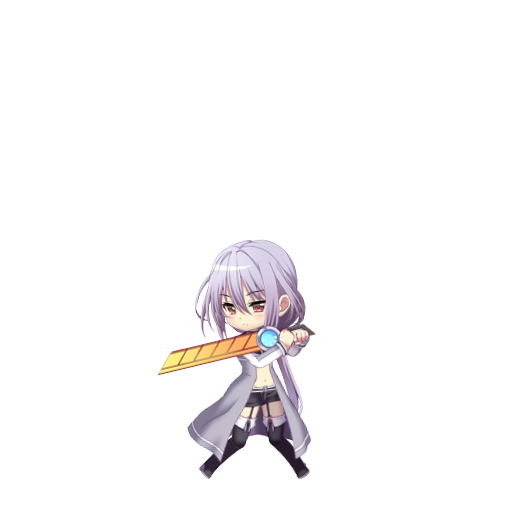 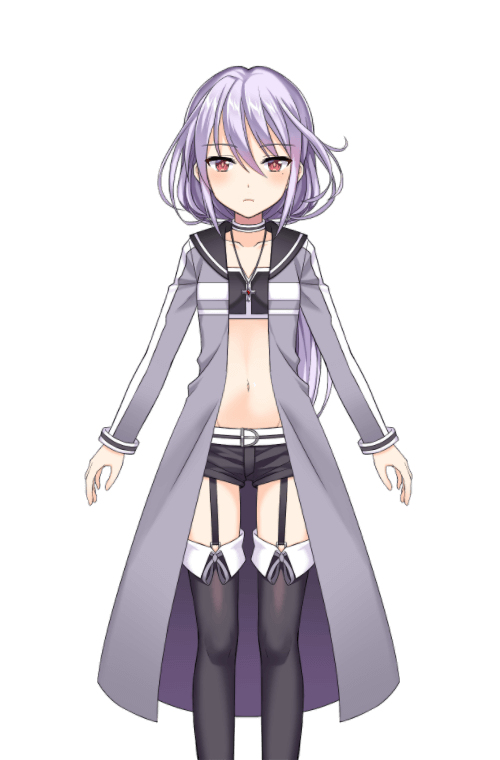 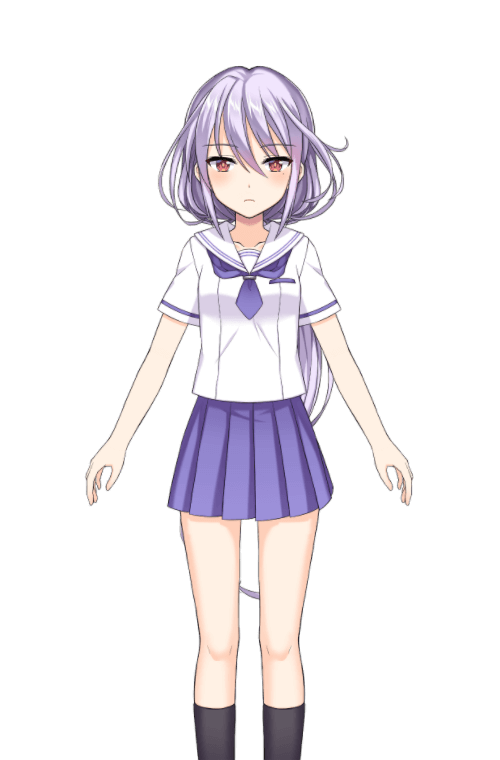 A magical girl with no parents who lives alone. She’s pleasant and friendly enough at school, but at night she takes on the face of an assassin who targets Magical Girls to kill them before then can become Witches.

Suzune had finished killing off the last magical girl in a particular city when Kyubey appeared, asking her if she would move on to the next city. Suzune nods and Kyubey asks her to go to Kamihama since Incubators can’t enter the city. Suzune heads out into Kamihama, where she searches the city for a witch barrier in order to attack unsuspecting Magical Girls. However, she instead finds a patch of Camellia flowers (called “Tsubaki” flowers in Japanese) which remind her of her adopted mother Tsubaki. Kaede Akino appears to tend to the flowers and she introduces herself. After talking about the meaning of Camellia flowers for a bit, some other Magical Girls appear to talk to Kaede which prompts Suzune to leave quickly.

Suzune eventually tracks down a Witch’s barrier where she finds a group of Black Feathers. Suzune dispatches the witch quickly and asks for their names but the group refuses to tell. She instead decides to attack them, aiming for their soul gems all the while. Mifuyu Azusa appears to defend the group and notices that Suzune is aiming to kill. Suzune attacks her next but Alina Gray appears. Alina puts Mifuyu in one of her barriers in order to protect her from harm. Alina then turns her attacks towards Alina, but Mifuyu warns Alina of the heat mirage that Suzune uses. Mifuyu tells Suzune that the best she'll be able to do is take out one of her opponents. Suzune agrees that further battle would be pointless and disappears from the fight.