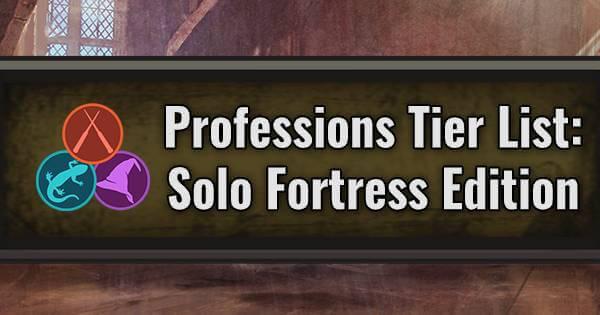 Harry Potter: Wizards Unite is, at its core, a cooperative game; it has the word “unite” in the title for crying out loud. But there are always times when you won’t be able to meet up with your fellow witches and wizards and you’ll need to fight the Calamity on your own. Sometimes that’s going to mean braving a Fortress by yourself to get that last Abraxan Winged Horse, or one of the Fortress Foundables for whichever Brilliant Event is going on.

Going into a Fortress by yourself means that your choice in Profession matters more than when you have allies in the combat because you won’t have other people to help shore up your Profession’s shortcomings. We’ve put together this handy tier list to help you get an idea of how easy it’s going to be for your Profession to take on a Fortress solo.

Before we get into the list itself, we should make clear what metric we used to rank each profession. First, we looked at each Profession’s maximum stats for Stamina, Power, Defense, Proficiency Power, Deficiency Defense, Precision, and Critical Power. These are your primary combat stats affecting how much damage you can take and deal, as well as how that changes depending on the type of enemy you’re facing. For more details on what these stats mean, be sure to check out our Profession Stat Comparison Guide here.

The third and final metric is looking at what charms and hexes your Profession’s skill tree has access to, as well as how many Scrolls, Spell Books, and Restricted Section Books you’ll need to finish out each skill tree. Going further down the skill tree means better stats and more effective spells.

With all that in mind, let’s get into the list!

The Magizoologist has a rough time in solo combat. It’s strengths are it’s astronomical Stamina, Defense, Deficiency Defense, and Protego Power stats but it comes in dead last in every offensive stat. While you won’t be taking as much damage as the other Professions, you’re going to have a harder time dealing damage to your opponents.

The second big strike against the Magizoologist is the enemies you’ll be facing. Only a little less than 18% of Fortress enemies are Beasts, so you’re not going to have a lot of chances to use your already minimal Proficiency Power. If you’re chamber isn’t filled with Erklings or Acromantulas then it’s gonna be a hard fight. Doubly bad for the Magizoologist is the prominence of Curiosities. The vast majority of Fortress enemies, around 64%, are classified as Curiosities meaning that you’ll be taking more damage than usual in most of your fights. While your Deficiency Defense is the best there is, you’re still going to be taking some heavy hits from high-level foes without the ability to fire back with damage of you’re own.

The third and final strike against the Magizoologist is that it requires the most Scrolls and Spell Books to finish out its skill tree. It’s tied with the Auror for needing the fewest Restricted Section Books, but those intense requirements for the other skill tree resources means that you’re going to be waiting a while to reach your full potential.

All in all, the Magizoologist is best suited for a team environment where its bulk and healing ability has more opportunity to shine. But in solo situations, a support and tank-based skill set combined with a weakness to most of the enemies you’ll be facing means that Fortresses are going to be harder than wrangling a Blast-Ended Skrewt.

With the highest Focus and Proficiency Power of all three Professions, and its proficiency against the large number of Curiosities, the Professor seems primed to be slinging spells and wrecking werewolves. But academic theory doesn’t always translate well to practice.

To start off with, the Professor is built to be the all-arounder Profession with the lowest values in only two combat stats: Deficiency Defense and Defense Breach. While Deficiency Defense isn’t the greatest stat to be last in it’s on par with the Auror and only 10 behind the Magizoologist’s top position at 60%. The exclusive access to the Deterioration Hex is also really nice since it grants Professors the unique ability to lower enemy Stamina every time they attack or defend. Being able to punish defensive enemies every time they make any kind of move is fantastic for bolstering the Professor’s mid-range offense and avoiding the long wars of attrition the Magizoologists tend to find themselves in.

The majority of Fortress enemies being classified as Curiosities means that Professors will have any easy time putting their 150% Proficiency Power to use. The weakness to Dark Forces is made worse by the low Deficiency Defense, but with only about 20 out of the 112 Fortress enemies, it’s a weakness that won’t be showing up as often as the Magizoologist’s weakness to Curiosities. Likewise, the Professor comes in with respectable Stamina and Defense which can be boosted through several skills in its skill tree.

The only way to reliably find Restricted Section Books is by participating in Brilliant Events, meaning that your best abilities are limited by how many of certain event tasks you’re able to complete. With so much if their skill tree locked behind a resource limited to just a few each month, and dependent on completing specific steps in the event task chains, the Professor barely squeaks into the second place slot.

The Auror is built to be the offensive Profession and it delivers on that promise in spades. It has the highest Power and Defense Breach to smash through enemies, and the highest Precision and Critical Power to get critical hits more often and make them deal even more damage. The problems come when Aurors get hit as they have the lowest Defense of the three, and tie with Professors for the lowest Deficiency Defense. Fortunately, they get access to spells and skills that help shore up their meager defenses, such as the Weakening Hex which lowers the Power of the enemy it hits thereby softening the blows the Auror will be taking.

Aurors are weak to Beasts, but the same rarity that hurts Magizoologists saves these defeaters of the dark arts. Speaking of dark arts, not very many Fortress enemies fall under the classification of Dark Forces (about the same number as there are Beasts) but the Auror’s high offensive stats means that they don’t need to have the rock-paper-scissors advantage to deal effective damage. Their neutrality to the whole slew of Curiosities found in Fortresses means that you’ve only got a 17.85% chance of facing an enemy that you’re weak to.

With all of this in mind, the Auror’s ability to punch through a lot of enemies without relying on type matchups or rare resources makes taking the top spot Stupefy-ingly easy.

So there you have it, a tier list of how effective each Profession in Wizards Unite is at taking on Fortresses alone. But there’s one big note that bears repeating: Each Profession is most effective in a group. Solo combat is something you may have to do from time to time, but Wizards Unite is, at its core, a cooperative game. Aurors can’t take all that damage forever, Magizoologists are your best bet against Fierce Acromantulas, and Professors are vital in deteriorating enemies and buffing the party with the Proficiency Charm. So take this tier list as a sort of prep guide; know your Professions strengths and weaknesses, prepare to work around them, and you’ll be ready to fight the Calamity no matter which path you choose!