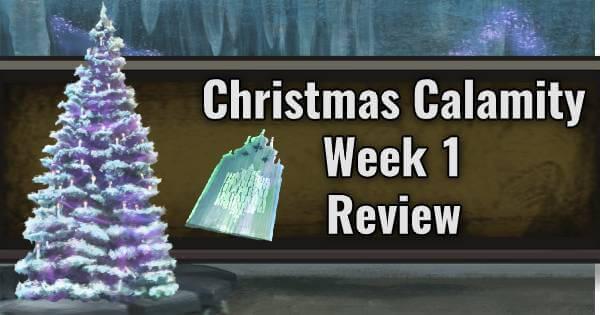 The Most Wonderful Time of the Week

The first week of the Christmas Calamity Brilliant Event wrapped up earlier today, making it the perfect time to get a feel on what was, well, brilliant, and what left players feeling scrooge’d. As always, this is all completely based on personal opinion so if you think something was better or worse be sure to sound off in our Community section here!

The best part of this Brilliant Event, is the theming. The Yule Ball is a slam dunk of a theme for December, and the renewed emphasis on gifting and expanding your Friends List just makes it all the better.

The holiday season is all about giving and togetherness so having event tasks centered on making a new friend and a bonus assignment task focusing on sending gifts to those friends really makes it all come together and ensures that the gifting feature isn’t forgotten as we get further from it’s debut.

The Yule Ball Invitations were a fun addition that made the event feel more like a quest rather than just a week of special spawns. I do wish that there was something to do with them after the fact, like maybe trading them in for Spell Energy, but otherwise it was nice to have something to be on the lookout for even when I was just gathering up some Gnome Confoundables.

Likewise, the event tasks were not too too bad to complete and the rewards were well worth it. Getting Restricted Section Books is always a good thing, and putting them behind these manageable tasks is a good incentive to play out the full event.

Christmas Calamity week 1 did a lot of things right, from the theming and other mechanic tie-ins, to the task difficulty and rewards. But some things made me feel more like Grumpy Ron instead of Brilliant Hermione.

While the Yule Ball theme was amazing, its timing was a little weird. Not long before the event the Yule Ball Great Hall Registry Page went live featuring a lot of very similar Foundables to what was found during the event.

The Trace Encounters, Brilliant Hermione and Viktor and Brilliant Hagrid and Madame Maxime, did at times feel more difficult to get a hold of than they probably should have. The issues with Foundables resisting masterful casts and running away almost immediately are nothing new, but to have event Foundables that don’t have a very high threat level have those problems was a real pain. It took me multiple encounters to get my first Brilliant Hagird/Maxime because that pixie would shrug off my casts and run away after the first or second spell.

While the task rewards made them worth the time it took to complete them, there were some that could’ve used some clarification. The tasks in the third and fourth sets that required players to get a certain number of Invitations from “Gnome Confoundables” was more than a little confusing.

It took some research to figure out what qualified as a Gnome Confoundable and I feel like it would have been nice to have an in-game notification tell me what to look out for so I wasn’t wasting valuable event time searching what that meant.

Christmas Calamity Week 1 was on the whole, a great event. Most of the negatives were more annoyances and grumblings than anything that broke the experience. While Stronger United was dragged down by the ghosts of Brilliant Events past, Christmas Calamity bodes well for events in the future.