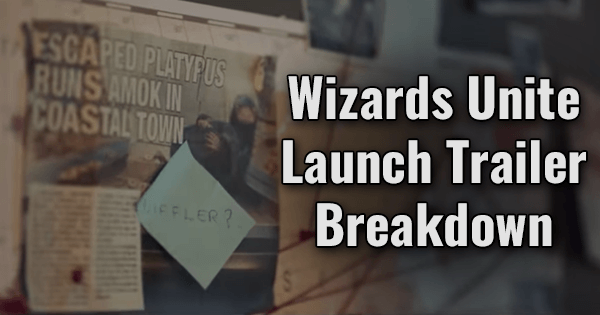 At the Wizards Unite event at Universal Studios Hollywood yesterday, invitees got a first look at the game’s launch trailer, which has now been released to the world. Check out the event recap for more information from the event, and read on for GamePress’ full trailer breakdown, including some details you might have missed.

The trailer opens with a young woman, Em, listening to news about the Calamity. She has a wall covered in Muggle news articles, with pins and strings connecting them all. Em puts a post-it reading “Niffler?” on a news article about an escaped “platypus.”

There’s a laptop playing a news video featuring Fluffy. A snitch crashes against the window while the radio host says, “It could be happening in your very neighborhood.” That’s a small nod to a core feature of Niantic’s games: the game takes place in players’ own neighbourhoods.

Em looks out, and dark magic seems to be coming down from the sky. She spots a dementor chasing a young Harry Potter, and she rushes to leave as a rogue Nimbus 2000 soars by. Those are all references to the previous teaser trailers.

Em grabs her phone (conveniently already open to Wizards Unite) and runs out of her flat. A clever use of mirrors reveals her phone to actually be a wand. The phone—and by extension the mobile game—is just what Muggles see, but players are really witches and wizards.

Outside, there is magic everywhere. She runs up to two young wizards hanging out by an ice cream truck who seem to be her friends. One is holding a copy of The Daily Prophet with the headline “Magic appears in Muggle world.”

Em tries to tell them about the dementor, but she’s cut off by the appearance of some dark wizards. Without a second of hesitation, her friends spring into action, and there’s a flash of spells and special effects as they battle. Em, a bit more hesitant, joins the fray and gets disarmed.

Her friend shouts for her to grab the Portkey. She’s gone in a flash, the dark wizard looks around for her, and suddenly she’s back, now armed with Hagrid’s umbrella. That’s another clever detail hidden in the trailer: Hagrid’s Hut is one of the locations the game’s Portkeys can transport players to, so she must have gone there for the umbrella.

The dark wizards gone, Em wastes no time and races to where she saw the dementors chasing Harry. She gathers her courage (and happy memories) and shouts, “Expecto Patronum!” It is a very Prisoner of Azkaban moment, as Em’s Patronus clears out the whole group of dementors that were all swarming young Harry.

Hedwig’s Theme starts playing, and there’s a close-up of Harry’s iconic glasses as he reaches for them. Em’s friends catch up to her just as Harry stands up and is whisked away by magic. The boys exchange looks, “Was that—?”, and the trailer cuts to gameplay footage mixed with “The Wizarding World needs you!” interspersed.

The brief glimpses of gameplay shown include some Trace encounters, a Portkey to Hagrid’s Hut, and some combat with a Death Eater, a dark wizard, and a werewolf. Finally, there’s the Wizards Unite logo and a release date: June 21.

The crowd at Universal yesterday loved the trailer, and fans online are loving it too. This is a theatrical quality trailer, which shows just how much Niantic and WB are investing in this game.

The trailer features several references to the previous trailers for those who have been following along the whole time, and there’s a new trio of heroes at the core of it all. Will we see these three heroes again? Only time will tell. In the meantime, grab your wands and get ready for global release of Wizards Unite, starting with the US and the UK this Friday, 21 June.