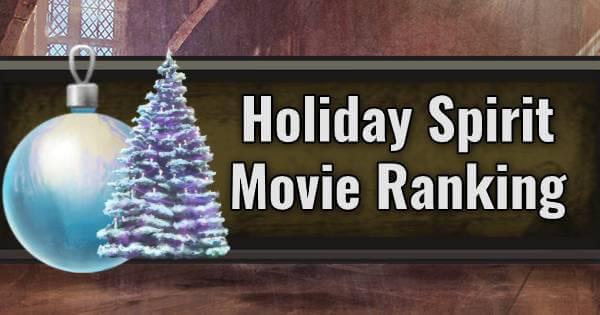 The holidays are here and there’s that winter magic in the air. ABC Family is holding its annual holiday movie marathon that always includes all eight Harry Potter movies. Which of course begs the question: Which of the Harry Potter movies has the most holiday energy? Let’s find out!

How do you rank the holiday-ness of a Harry Potter movie? A high ranking movie is going to feature a good scene or two that takes place around Christmas or winter in general. These scenes are also going to be heavy on traditional holiday themes such as giving, family, togetherness, and snow. So with all of these thematic cues in mind, let’s get right into the list!

While they bring the series to a climatic finish, Harry Potter and the Deathly Hallows Part 1 and Part 2 don’t really feature any holidays. While Harry and the Order definitely had bigger things to worry about than secret Santa, that’s not what this tier list is about. At one point Harry and Hermione don’t even realize its Christmas until it’s already halfway over.

Ron is also not with them during this part of the movie so they score pretty low on the holiday themes of family and togetherness. It’s cold and snowy sure, but it snows in the middle of January too and that’s the worst part of winter.

The Second Wizarding War is nigh during HBP and you can tell. The building tension is again, great for the overall narrative of the story, but the looming threat of war outweighs the minimal nod to the holiday season in this movie. If each of these movies was a present, Half-Blood Prince is a pack of plain grey tube socks that even Dobby would be lukewarm on.

The Prisoner of Azkaban

The third movie is a good one, and would rank higher if the only piece of criteria was wintery atmosphere. The entire Hogsmede sequence with the Invisibility Cloak is fantastic, but when it comes to the holiday theming, POA just doesn’t do anything outstanding. Not bad, not amazing, just sufficient.

This movie is a great example of a magical mystery. Who’s the heir? What’s the Chamber of Secrets? Why is this considered a staple holiday movie when its completely average on all holiday metrics? What’s petrifying students? Unfortunately only three of these questions get answered by the end of Chamber of Secrets. The holidays in this movie is passable, but it could have been so much better given how well the Weasleys are introduced and how quickly they adopt Harry into the family.

The Goblet of Fire

The midpoint of the movies has of course, the most iconic holiday scenes in the series: The Yule Ball. While not as strong in the theme department as Order, absolutely knocks it out of the park in terms of character and plot development, and the sheer magic of the season.

The Yule Ball takes place in the middle of the Triwizard Tournament and helps bring all of the interpersonal plot lines to a head. Harry processes his heartbreak of losing Cho Chang and moves on emotionally, Ron begins to hint at his feelings towards Hermione, and the resulting argument between the two of them provides a solid background plot for the rest of the movie.

With everyone’s feelings out in the open, we can begin to appreciate the depth that these characters have taken on over the past three and a half movies and it marks the series’ transition into the more mature tone of the later entries.

As befitting the occasion of three wizarding schools coming together, the Yule Ball goes all out in showing us everything that a magical holiday can be. The great hall is lavishly decorated with every kind of magical bauble available; I mean come on, the fairy lights are actual fairies! The whole aesthetic of the scene is just off the walls amazing and really makes you believe that theres a school of magic solely devoted to Christmasmancy.

While the holiday themes aren’t very strong here, and Ron and Hermione’s fight actively going against the theme of togetherness, the visuals push Goblet of Fire over the edge into S tier. There’s a reason the Yule Ball was chosen as the theme for this month’s Brilliant Event after all.

The first movie brought the magical world of Hogwarts to screen and made the holiday season at Hogwarts even more magical than they already are. From the sweeping shots of a snowy Hogwarts, to seeing Hagrid bring in the enormous tree to be used for the Great Hall, it helps further establish the whimsical tone of magic that forms one of the cornerstones of the first entry in the series.

Likewise, the scenes that take place during this season are important to teasing the plot of the movie’s third act, as well as plot points of later sequels. During this time, we’re introduced to the Invisibility Cloak, which comes full circle in Deathly Hallows, wizard chess, which cements Ron as a vital member of the cast later on in the movie, and it’s a wonderful way to further develop Harry and Ron’s friendship.

The themes of family and togetherness are also well presented here, as Harry and Ron’s first outing in the Invisibility Cloak leads them to the Mirror of Erised in which Harry sees himself with his parents. Wrapped in his father’s cloak next to his new best friend, it draws a nice contrast between mourning not getting to spend the holidays with his loved ones, and celebrating getting to spend it with the new family that he’s found in Hogwarts. A great exploration of these themes that provides a great baseline for future installments to expand on.

The Order of the Phoenix

The fifth entry in the Harry Potter series is a masterpiece of holiday energy. Harry, the Weasleys, Hermione, and the rest of the Order all meet at 12 Grimmauld Place to have Christmas dinner and exchange gifts. This scene takes the theme of celebrating with found family established in Philosopher’s/Sorcerer’s Stone and brings it to it’s zenith.

Everyone that Harry has become close to is here, the family that he’s made for himself in the wizarding world is all gathered together in the same place to celebrate being together. Mr. Weasley is there safe with his family after his encounter with Nagini, and Sirius gets to spend the holiday with his friends and godson.

Sirius’ presence is what really brings this scene together. He’s the last direct link Harry has to his parents, and as his godfather is the strongest father figure Harry has at this point in the series. Him being there makes this the first Christmas that Harry has gotten to spend with someone he sees as a parent. And that only makes his loss in the climax of the movie that much more heartbreaking.

The holiday season in Order of the Phoenix is a nice respite in an otherwise heavy story. It shows that being together is a source of strength that can brighten even the oppressive darkness of Voldemort’s return.

So there you have it, a definitive ranking of each of the Harry Potter movies based on how much holiday spirit they have. If you have a different idea of which movie belongs in which spot, be sure to sound off in our Community section here or tells us on Twitter here! And if you want more information about the Christmas Calamity event, check out some of the articles listed down below!