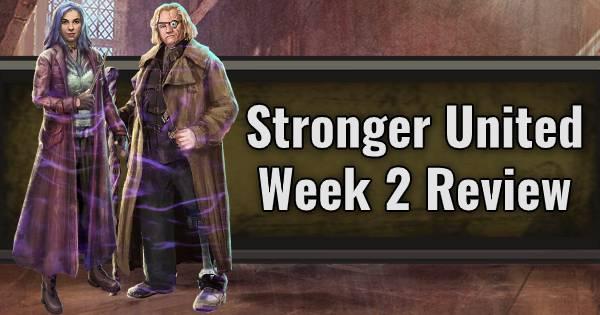 The final week of the Stronger United Brilliant Event has wrapped up so now it’s time to take a look back on it and see what it did well, what could’ve been better, and how it compares to previous Brilliant Events.

Putting the Strong in Stronger United

The biggest win this week were the event tasks. While they weren’t extraordinary by and large, the task requiring players to make a new friend was an excellent addition. By adding in the friend requirement, it emphasizes the “unite” part of Wizards Unite and it really pairs well with the introduction of the gifting mechanic.

Since gift boxes can only be sent to other players in your friends list, the event task serves well to draw attention to the new feature because now everyone participating in the event has a guaranteed friend to send a gift to. I think emphasizing the community aspect of the game was a stroke of brilliance, especially as we head into the season of giving.

The biggest problem that week 2 of Stronger United faced was that it had a bit of a problem differentiating itself from the first week. Ideally a Brilliant Event’s two weeks feel related but not wholly the same. The Back to Hogwarts event did this really well by splitting the two weeks between the Hogwarts Express leaving Platform 9 3/4 and its arrival at the Hogwarts grounds. Stronger United didn’t feel like it had this same distinction and just felt like the weeks were kinda muddled together.

I think the biggest reason for this feeling was the fact that you could still find the Brilliant Tonks and Moody Foundables as regular Trace Encounters during this week. When week 2’s only Trace Encounter was Brilliant Arthur Weasley, it got lost in the shuffle and wasn’t given as much of an opportunity to shine. Carrying over the week 1 Traces was nice in that it gave players more time to collect them if they missed out on week 1, but I don’t think that that outweighs the loss of identity for week 2.

In the week 1 review I said that Stronger United’s biggest weakness was that it lacked a cohesive identity and theme when compared to how previous months’ Brilliant Events tied in with their Community Days and other events. Week 2 only emphasized this weakness and brought along with it the problem of a lack of internal cohesion. With week 1 still so visible in Traces, week 2’s content only really got to shine in Fortresses and special assignments.

The characters and items represented by this round of Brilliant Foundables just didn’t seem to have as clear of a connection as past events. The setting of the Ministry of Magic is all fine and good, but was an institution that was so divisive in the books really the best option for an event titled “Stronger United”? What does “Stronger United” even mean? It sounds like it would relate more to the Order of the Phoenix or the Battle of Hogwarts than the Ministry.

All told, this week suffered all the same problems as week 1: a lack of cohesion with the month’s other events, a vague and poorly defined theme, and an overwhelming sense of mediocrity.