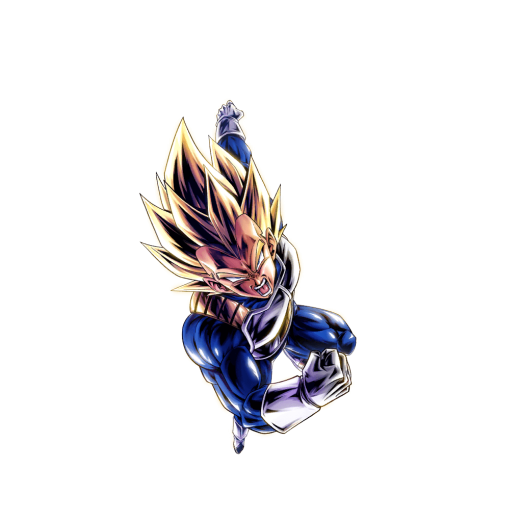 SP SSJ Vegeta (ToP) BLU is the 1% Fighter that has come alongside SP LL MUI Goku RED for the 4th Year Anniversary and he’s very lackluster compared to most of the top meta Fighters. This follows a similar trend to last year’s anniversary 1% Fighters, who were also lackluster. Nevertheless, Vegeta is still a viable Fighter in PvP as he can do a decent amount of Damage while supporting his allies. Vegeta has the capability to take hits well in a 10-timer count window post-transformation when he enters the battlefield as he’ll have a 70% Damage reduction but outside of that, he can’t take hits very well.

The biggest issue with SP SSJ Vegeta (ToP) is that he needs to be at or below 50% HP before he can transform but that can prove to be very detrimental in a match as Fighters with powerful Ultimate Arts or Special Move Arts can kill him at round 60% HP. Secondly, his unique ability to destroy the enemy’s cards and reduce their ki by 100 once he’s at 50% HP or below doesn’t activate randomly which points to the fact that it might be bugged.

These buffs last for 10 timer counts so it has a small window of effectiveness but the results can be noticeable. This buff also activates for Vegeta himself so he’ll be able to ramp up his own Damage quite a bit.

His Extra Arts post and pre-transformation gives a 20% Damage inflicted buff to allies for 15 timer counts and he force draws an Extra Arts at the beginning of the battle. His Extra Arts also shortens allies' sub-count by two which can be useful in getting better rotations than your opposition.

Post-transformation, SP SSJ Vegeta (ToP) BLU has the capability to deal great Damage to top meta Fighters. He gets 120% Damage inflicted upon entering the battlefield and his +1 Arts Card Draw Speed will help his ability to ramp up Damage as mentioned in the Strength above. This allows Vegeta to be threatening offensively especially if he has a Special Move Arts in his hand as it has a massive Impact Damage multiplier and he gets 30% to Special Move Damage for 3 timer counts upon Activation.

Outside of that small window mentioned in the Overview, SP Vegeta SSJ (ToP) BLU can’t take hits from top meta Fighters and this puts him at risk of dying before he can even transform.

SP SSJ Vegeta (ToP) pre-transformation does nothing on the battlefield as his Damage is poor and his tanking capabilities are non-existent.

SP SSJ Vegeta (ToP) BLU is the best BLU Fighter for the Universe Survival Saga Team. SP Beerus BLU is a good second option but he really needs Whis to become an effective sniper and his defense is worse than Vegeta’s.
Vegeta has a great Z-Ability for the team as he buffs both defenses and gives a 15% Strike Attack buff to Fighters who are both Saiyan and USS, which are SP LL MUI Goku RED and UL SSB Kaioken Goku YEL.