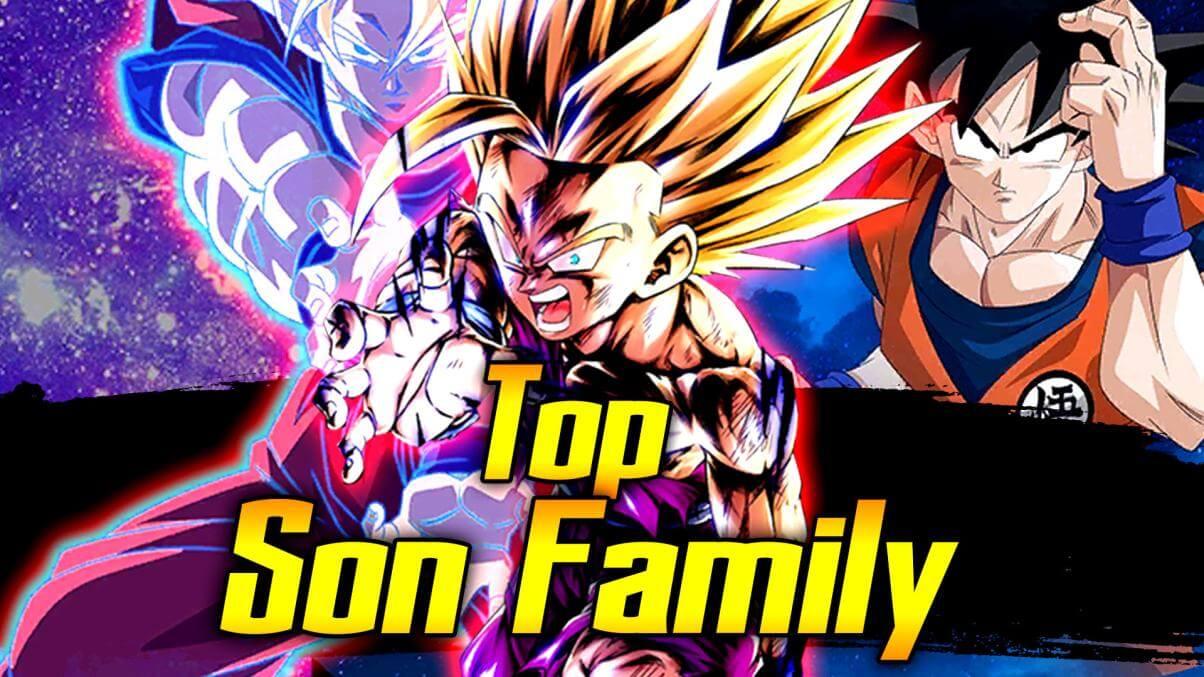 While SP SSJ2 Youth Gohan RED is not a frustratingly dominant Fighter anymore, he's still a top tier Meta choice and he's the clear leader of this Team, as he Supports all his allies ( one of the main reasons the Team's overall Damage is high even in early game ) and his Offensive capabilities arguably become the best in the Game after his Teammates fall in battle.

One of Son Family's main strengths is having multiple Fighters that can have huge advantages as "Last Man Standing", or in late-Game in general. This is the case for the aforementioned Gohan, and for SP Angry Goku BLU as well. While the latter can't match his son in terms of Damage Buffs as a LMS, his counter-Special Move and superior Tankiness make him just as oppressive in skilled hands. The presence of multiple Fighters on this Team that can consistently dominate the late-game to such an extent makes it really hard for opponents to choose which Fighter to preferably take down first ( although generally Gohan is considered more threatening since Angry Goku is not as easy to use). One thing is for sure: Son Family has the highest comeback potential in the whole Game, and this aspect should never be underestimated.

About other Fighters, SP SSJ3 Goku GRN Z7 has been one of the latest additions, and he's just as important as any other Core Fighter highlighted in this section. It's important to keep in mind that some of his Damage Buffs depend on how many Saiyans allies he has, which means he's not a perfect fit alongside SP SSJ2 Gohan RED. Still, the two of them together perform pretty well, and since Goku covers Gohan by color, they should be paired often, as Goku specifically excels at Tanking hits ( high durability plus heals ). SP SSJ4 Goku PUR is another Fighter on the Team who can consistently shrug off hits thanks to his constant Healing and Damage Reduction. Having multiple defensive anchors is important for Son Family, since its lackluster Z-Abilties ( the most glaring weakness of the Team ) would make the whole Team pretty mediocre Defensively otherwise.

To wrap it up, the Team is full of Fighters that can change the momentum of a Match in one fell swoop, and it's only hindered by its lack of overall synergy in comparison to other Top Tier Teams (mainly Z-Abilities related).

High Damage Buffs make him a really strong Damage dealer at maxed limit break, but Ki issues and lack of versatility make him much worse than SSJ2 Gohan for the Team.

He's a decent Offensive Fighter thanks to his (situational) Arts Draw Speed and pretty remarkable Offensive Buffs, and his durability is not bad thanks to his Endurance, however he's average at everything in the grand scheme of things. He's more useful for his Z-Ability rather than anything else.

The Core is getting more and more Saiyan based, even Ability Bonus wise, which hurts his viability. He's still a playable option thanks to his Strike Lock mechanic and decent Offensive potential, but he's not really at the same level as the Core Son Family Fighters.

Long Combos potential makes him an interesting for this Son Family Team, however what he can offer is much more niche than the consistency Namek Goku provides.

He needs to be 6* to be considered an alternative for this composition. Even then, don't expect him to be a perfect replacement for either of the Purple Zenkais on this Team, rather he can be a solid Offensive option with decent utility thanks to his Dodge gimmicks and Covers.