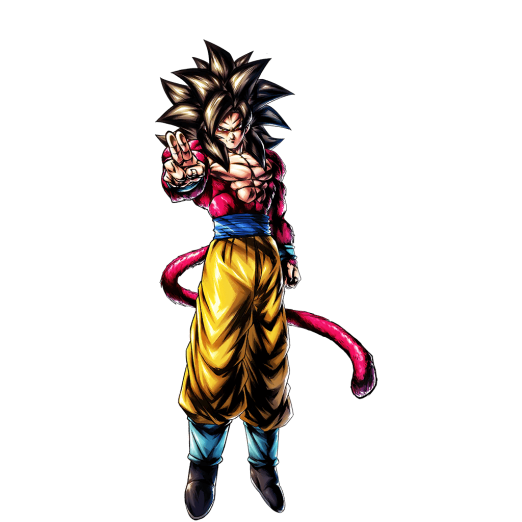 Offensively, he doesn't do much at all, even at 14 stars. Defensively, he has some damage reduction, but he still leaves much to be desired on this front.

LL SP SSJ4 Goku YEL has a cover rescue ability which has quite a number of uses. He can evade an incoming Rising Rush, force your opponent to be smart with their Rising Rush as to not miss it due to his cover rescue, can dodge powerful Special Moves and Ultimate Arts.

LL SP SSJ4 Goku YEL’s Special Move, Extra Arts, and Ultimate Arts cards all have blast armor when charging forward. This puts an insane amount of pressure on your opponent in the mid-range game where it’s normal to engage in attacks. With this, you can force your opponent to play defensively and counterplay them.

As with most Legends Limited Fighters, at low stars, their stats are almost always terrible compared to the top-meta Fighters in the game and it looks like they intentionally made LL SP SSJ4 Goku YEL’s stats lower than usual for some reason.

This weakness directly ties into the fact that he has low stats. Even though he can gain up to a 60% Damage reduction, he still won’t be reliable on defense due to his poor stats.

Unfortunately for LL SP SSJ4 Goku YEL, the YEL color on the Saiyan team is currently filled by the recent release of SP Vegeta YEL and SSJ4 Goku isn’t strong enough to warrant him being used on the team. This is mainly due to the synergy that SP Vegeta YEL and Z7 LL SP SSJ3 Goku GRN have as it’s one of the best combinations in the entire game.

Even so, you could run SSJ4 Goku on a yellow-yellow-blue (YYB) set-up with Z7 LL SP Angry Goku BLU and SP Vegeta YEL. His future usability on the Saiyan team is also incredibly low due to the fact that he doesn’t buff Saiyans with his Z-Ability.

This is the team where SP LL SSJ4 Goku YEL can shine as his only competition is the outdated SP Syn Shenron. With the recent Zenkai Awakening of SP Super 17 GRN, GT can now be used to some extent in Pvp alongside SP LL SSJ4 Goku YEL. Toshi has stated that GT will be getting more love in the future so the team’s future is looking bright.

These times were dark enough without you

A HP Equipment is necessary on every Fighter. There are various other HP Equipment Goku can use, such as Battle of Saiyans.

This Equipment provides Goku with additional durability as well as a necessary Pure Strike Buff.

This Equip provides Goku with a very large Base Strike Buff, further enhancing the effect of the Pure Buff. Just hang in a little longer Piccolo! provides a similar Buff.

SP SSJ4 Goku YEL is considered 3 stars on the Tier List. At 6 stars, he would still be mid/low Tier 1

GT is still too much of a work in progress at the moment. Alternatively, while both SSJ3 Gokus on Son Family prefer Saiyan partners, SP SSJ4 Goku YEL has pretty bad synergy on the team. Almost everyone else except him prefers Blast, and using two units with cover rescue in a Match can be awkward if the third unit is caught out early.

Even if he were to be brought into Son Family matches consistently, he doesn’t carry his weight and largely relies on the other Zenkai units on the team to do the work for him. With no consistent core placement on any team as well as a lackluster toolkit, he’s placed in Tier 2