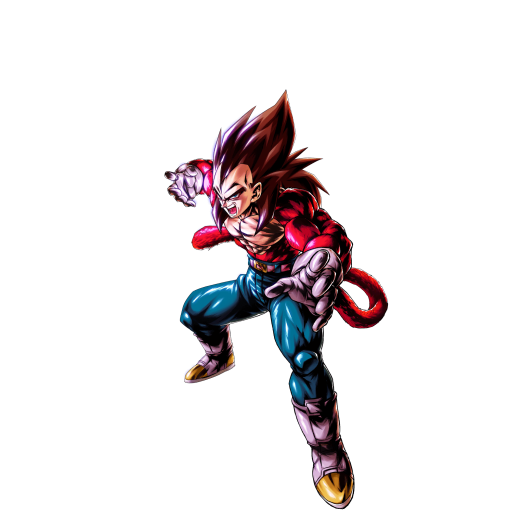 SP SSJ4 Vegeta RED is the second GT Fighter to receive a Zenkai Awakening and he’s a Fighter that didn’t need much to become a menace in PvP as his toolkit was already better than most Fighters, he just needed a stat increase.

His Zenkai didn’t disappoint as it fixed his defensive issues due to his high stats and his offense is to be feared by every neutral Fighter.

He has now bolstered his way to become the best RED Fighter for Vegeta Family, Pure Saiyans, and GT.

There is no rest for the targets of Vegeta’s rampage.

If enemy Fighters switch out, Vegeta’s next Arts Card is powered up by a staggering 40%, which turns his Blast Cards into veritable warheads and gives his Special Move Arts or Ultimate Arts one-shot capability, as both of them reduce the effects of Cover-Change Sustained Damage Cut Abilities.

This Ability discourages retreating and can set-up early kills very easily if Vegeta's foes don't know how to play around it.

Vegeta might not be the nurturing type, but he's still able to find unlikely ways to inspire his Allies.

Vegeta holds 2 Blast Arts Cards, one of which is equipped with a 20% Buff to Blast Damage for 2 timer counts on activation, enhancing the Team’s overall Damage over the course of a match as the card is cycled over and over again.

You Can't Slow Me Down

The Crimson Roar Special Arts Card allows Vegeta to bypass Debuffs and Status Conditions, as well as Buff his own Blast Damage for an obscenely long time.

This extra bit of clerical utility goes a long way in certain match-ups where these types of effects are common. This Special Skill is also useful to time-stop to see what action your opponent is doing so you can frame-trap them or catch them off-guard with a Special Move or Rising Rush.

In addition, Vegeta brings with him a +40% Blast Damage Buff, a generic +40% Inflicted Damage Buff, and instant 30 Ki Restoration whenever he enters the battlefield, making him one of the best Offensive Pivots in the game.

The fact that Vegeta requires no Support or set-up to reach these numbers is what makes him such a menace to face.

SP SSJ4 Vegeta RED gains a 100% Damage Inflicted increase if an opponent is trying to go through his Blast Arts with Blast armor. A perfect counter to LL SP SSJ4 Goku YEL.

As mentioned in the Overview, SP SSJ4 Vegeta's defense has significantly improved. He has a 30% Damage reduction on cover change and a minimal 15% when he enters the battlefield normally. His Zenkai stats coupled with his Damage reduction make him decent defensively.

Alongside his eternal rival, SP Super Saiyan 4 Goku PUR, Vegeta is capable of untold havoc. Each of them complements the other’s playstyle brilliantly and is truly a sight to behold on the field.

The clear third candidate to round out this trio is SP Super 17 GRN, whose also a blast based Fighter but also the tank for GT.

The Crimson Saiyan fits perfectly into the Vegeta Family team. The team has now become Blast-oriented which is Vegeta’s main source of Damage.

He synergizes incredibly well with SP SSB Vegeta PUR as he can strengthen his offensive capabilities to greater heights and SP SSJ2 Trunks BLU as he’s similar to Vegeta in that they’re both some of the strongest Blast-oriented Fighters in the game.

SP SSJ4 Vegeta RED also synergizes perfectly with the top meta Saiyan Fighters. He has LL SP SSJ3 Goku GRN as his GRN Fighter to protect him from BLU Fighters and has the insane support of SP Angel Vegeta YEL to help his survivability and Damage Output. Overall a better fit for the Saiyan team than SP Super Gogeta RED.

Special Move Damage is not too significant here, but it's one of the better Equips he has available to him for Blast Attack.

This patches up his Defense a bit more and gives Blast Attack in the form of a Pure Buff, which scales very well with Vegeta's Z-Ability and his Ability Bonus from his Allies.

For a while now, Saiyan has been predominantly led by SP SSJ Bardock BLU with the red unit being SP Super Gogeta RED. SP SSJ4 Vegeta RED much prefers a Blast variation with SP Angry Goku BLU and SP SSJ3 Goku GRN.

While SSJ4 Vegeta and Super Gogeta are a close call when comparing each other directly, both variations of Saiyan work just as well, with each having strengths and flaws that balance each other out. As a result, SP SSJ4 Vegeta RED has created a new ripple in the Tier list by putting some of the stronger Saiyan units on par with each other, and leaving Z Tier reserved for only the absolute best