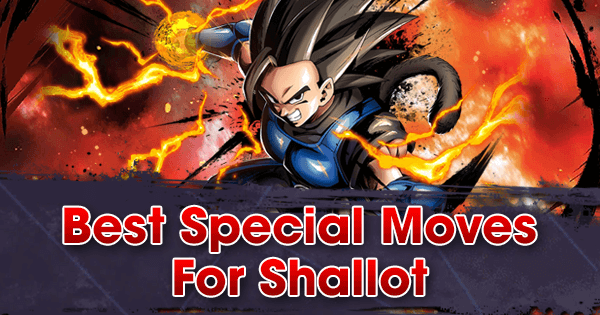 Shallot has surpassed his limits and reached Super Saiyan God! Not only does it substantially increase his power after he transforms, it also further justifies teaching him a Special Move of your choice. After transforming, Shallot becomes a powerful Fighter to use in every game mode, competing with some of the best Fighters in the game!

Before teaching Shallot a Special Move from an eligible Fighter, the Fighter’s Friendship level must first be at least level two. The daily Let’s Fight Bonus Battles are the fastest way to raise Friendship Level.

This attack is the highest Damage Dealing Special Move for Super Saiyan God Shallot! However, to unlock this Fighter's Best Special Move, you must Zenkai Awaken him before teaching to Shallot.

Despite SP Legendary Super Saiyan Broly (Green)'s Special Move being slightly weaker than Zenkai Awakened SP Super Saiyan Goku (Red), it is still among some of the highest Damage Dealing Special Moves. This is due to the "Massive" multiplier on the Special Move, as well as the additional Damage Inflicted upon activation.

Another option here is SP Golden Frieza (Green), this is another high Damage Dealing Special Move with the additional effect of Heavy Bleed.

This Fighter offers a Major Damage Special Move with an additional effect of a large 30% chance to inflict Faint, which can have devastating consequences for your opponent if the Faint lands.

This Special is on the weaker side of the other Special Moves Shallot has at his disposal, however it offers a large Hand Control effect by destroying 3 of your Enemy's cards. SP Super Saiyan Broly (Purple)'s Special Move provides a similar effect, destroying 2 enemy cards with slightly more Damage due to the Massive multiplier.

This Fighter has the only teachable Special Move which can inflict Forced Switching on the opponent, as well as additionally having Blast Armour. This move meshes very well with Super Saiyan God Shallot's ability to draw a Special Move on main.

While also being one of the more flashy Special Moves in the game, this can be great when going against enemies who stack lots of cancellable Buffs.

Similar to SP Super Saiyan Goku (Red), this Fighter must be Zenkai Awakened to unlock this upgraded Special Move. This Special deals major Explode Damage, causes the enemy to receive 20% more Strike Damage as well as having an additional 20% chance to inflict Faint.

This Special deals major Slice Damage, causes the Enemy to receive 20% more Strike Damage, and has a 40% chance of inflicting paralysis. Paralysis is a powerful and potentially game-changing status effect and can render the Enemy unable to move for a short period of time at random intervals.

This Special deals major Explode Damage, but much more importantly instantly restores Vanish Gauge by 50% on hit. This can prove valuable in certain scenarios where landing this Special Move will allow you to quickly vanish another attack.