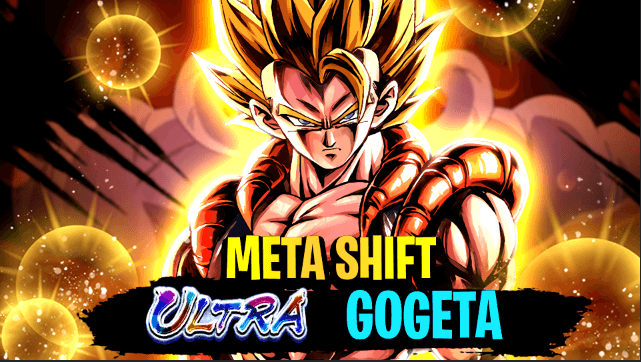 It's been a few weeks since Gogeta was first released, and by now everybody that has played a substantial amount of games in PvP should know that historically, his in-game impact will rank as high as some of this game's most infamous behemoths. It's only fitting, as Gogeta is the first summonable Ultra, and it was reasonable to expect him to significantly shake the Meta.

An important factor that greatly benefitted this Fighter is the Step Up Pulls mechanic the dev team thought of for the new rarity, specifically the amount of Z-Power you get each time you pull a copy of them. In fact, with 2000 Z-Power per pull you need just 5 copies to unlock their maximum potential, a drastic change of pace compared to the mind-boggling 17 copies needed to max Limit Break LFs in the past. It would be hard to ignore that this is a sign of acknowledgment of what made the Meta so messy in the past by the developers, namely the fact that it was just hard for low Limit Break Fighters to compete with very high stars Zenkai Fighters. This new wave of Fighters being "easily" obtainable at high stars right off the bat started with the Black Friday banners, but that was implied to be a one-time thing by Toshi, meanwhile, it seems that the 2000 Z-Power thing is here to stay for Ultra Fighters.

It can't be otherwise, after all. If new Ultra Fighters were to release without this pull mechanic, they would be just too overwhelmed by the current Meta kings stat-wise to compete. This is something that will also plague future LFs if their pull mechanic doesn't get permanently changed as well, but I think the latter is a reasonable thing to assume.

So, while Goku/Vegeta and Sword of Hope Trunks could be seen as a spark in the darkness, Ultra Gogeta is the release that defines a new era for the game, as outlines a clear statement: Ultra Fighters will dominate, now and in the future.

Another factor that helped Gogeta is the recently implemented Leader Slot, which allows a Fighter to be used in a team and take advantage of all the Ability Bonus on the Team regardless of its Tag. In the same way, his Z-Ability will also Buff all the other Fighters on the Team. There is a condition, however, namely that for this to apply, the Fighter must be brought to a Match. This means that, if you don't put a Fighter that's good enough to be brought to a battle every time, then you're going to make your Team weaker than if you used a more traditional Tag-based approach to build it. This is not an issue for Gogeta, as he's indubitably strong enough to be a top 3 unit in the game against any Team you can currently encounter in PvP. As a result, he enables some of the Meta's best teams regardless of Tag and Z-Ability, like those with Purple-Purple-Blue color wheel, or Sagas Warriors in general.

However, it's not all fun and games for Gogeta, due to how his Ultra Ability works. If he's the leader, he gets an unconditional Damage Buff. If he's not the leader, he gets Damage buffs based on how many Fusion Warrior Fighters are on the Team. What this means is that once a Fighter that's strong enough to replace Gogeta as the leader on most of the Teams he works on, his max potential will only be attainable on Fusion Teams, which is quite the limitation compared to what he has now. Potentially, this could mean that each Ultra Fighter's cycle of dominance may last only as long as it takes to release a new one. Still, there is not much clarity about how many Ultra Fighters will be released throughout a year, and even if the worst possible scenario that's just been described were to happen, it wouldn't be that bad Meta wise if they released just 4-5 of these Fighters a year.

Overall, the new Metas ahead of us will be a breath of fresh air, since new Fighters will be able to do very well at release, and while there are some things that could be wrong along the way, jt's a much better scenario than the dreadful Zenkai era.