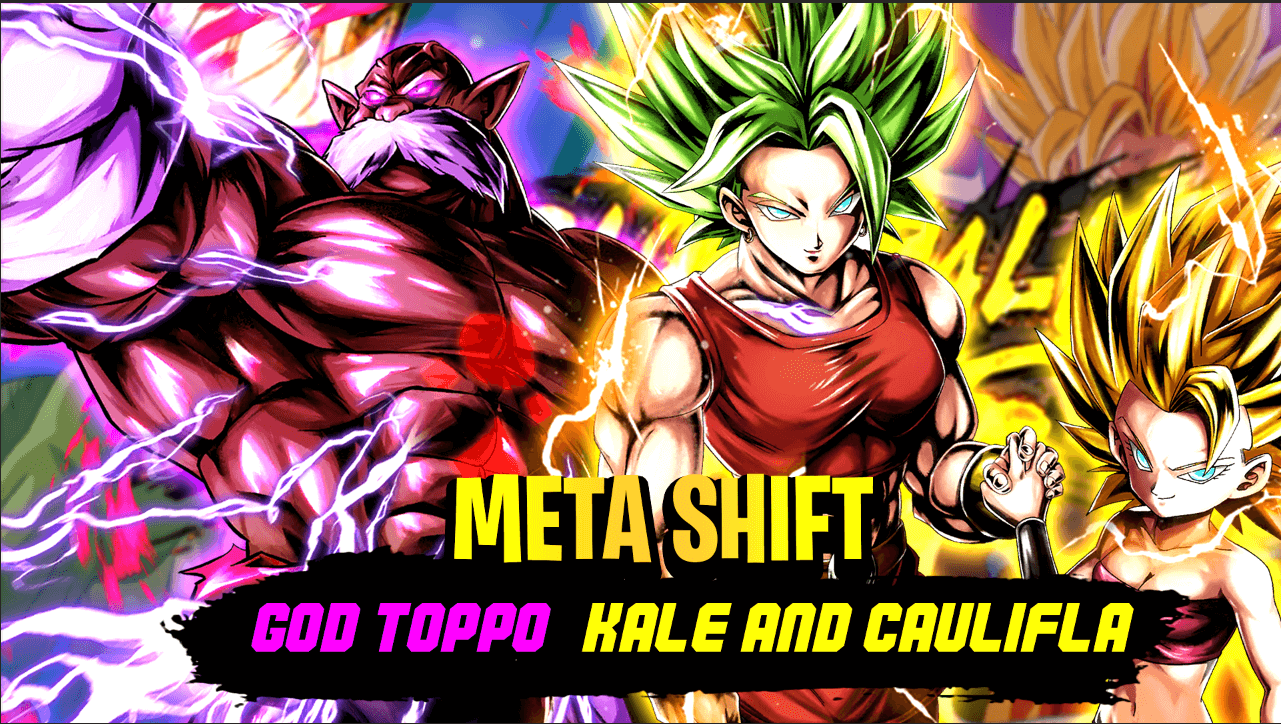 Since these three Teams share some Fighters, and Toppo fits on all three while Kale & Caulifla fits on two of them, it's worth to analyze them at the same time.

In Toppo's case he competes with Vados on all the Teams. The Universe 6's Angel has been a staple in the Meta for the past year, boasting impressive Supportive capabilities that made her essential, despite her noticeable durability issues. In comparison, Toppo can't make his allies better quite like her, but he can have an immense impact on Matches by himself. In fact, ignoring his raw Damage output for a second, his main Offensive tool is his 2 seconds Lock-in ( applies 4 times per Match, every time on switch in ). At a glance, it might look short, but it's just enough for Toppo to do significant amounts of Damage on color advantage with a few cards, or to use either his Ultimate Move or a Rising Rush to kill a specific opponent. This capability to control the Match in early game and take out a specific Fighter is akin to what Fat Buu can do Offensively on Regeneration, since he also has similar Lock-In Mechanics, but the difference is that Toppo's Damage output is generally much bigger, so he's able to take advantage of such Effect in a more meaningful way. Other than that, his toolkit is pretty balanced and consistent, ranging from reliable Blast Damage Buffs, to great Damage Reduction. In comparison, Vados has felt lackluster for a while in terms of her own Offensive-Defensive potential, and her Boosting other Fighters hasn't been particularly impressive on Teams that lacked very strong units, such as Rival Universe and Universe Survival. For this reason, Toppo is a decisive upgrade for the Team.

On God Ki the situation is trickier, as Vados-Revive Goku are a formidable Defensive duo even now, and the latter's Damage mitigation potential decreases a lot if Vados' constant healing isn't there to keep him alive. This doesn't mean you can't use him and Toppo together, as revive is a powerful mechanic even without Vados, but Zenkai 7 SP SSB Goku BLU is a very competitive option as well. In general, Toppo is probably an improvement for God Ki as well, but it might be significant or not depending on how many stars you have on Revive Goku.

Kale & Caulifla can't control Matches as well as Toppo, since they don't have Lock-in like capabilities, but they're decent Damage output, Vanish Gauge-restoring Extra Move, and overall Offensive value as a Fighter, still gives them a spot in the Meta. It's worth noting that while their base toolkit might make them look fantastic, it's not quite like that in practice since their stats are below average across the board. Particularly, their durability is pretty low, which is something that might them feel inconsistent at times.On Rival Universe, they compete with Champa, and that's probably a 1 v 1 they can win. While The God of Destruction hasn't aged super badly, it's pretty apparent that his Damage output isn't as good as in the past, and while he can still manipulate Matches pretty well through Debuffs, an Extra Move that immobilizes and a Main Ability that applies element neutral, all of that becomes less useful when he's straight up not that great in terms of raw Damage anymore. So, unless Champa has a big stars advantage over Kale & Caulifla, the latter will be more useful in the current Meta. The situation is different on Universe Survival, as not only SSBE Vegeta has a higher damage ceiling than Kale & Caulifla, but also he just feels like a better Fighter at basically everything.

Kale & Caulifla fit on neither of these Teams, for different reasons. Their Damage output and general Offensive capabilities are pretty good, but on Female Warriors they just can't compare at all to Android #18, a Fighter who has them beat by a lot in terms of raw Offensive ceiling. In fact, while the latter has aged a bit due to her one-dimensional kit, she can still inflict loads of Damage right off the bat thanks to her very long Combos and Buffs stacking capabilities. Kale & Caulifla needs a lot of stars to even compare, but it's not worth to pull them for this Team as 18 stays the better option regardless.

On Saiyan, fundamentally they're a better Fighter than Angel Vegeta, as he's a Fighter that's bad at everything other than Support and Cover Effects, but his niche fits tremendously well with a slow, Tanky Team such as Saiyan,  to the point he feels almost irreplaceable for the Team. Kale & Caulifla is the polar opposite, a fragile Offensive Fighter Replacing Vegeta means radically changing the identity of the Team , so to do that it would take an incredibly impactful Fighter, and K&C are far from that.