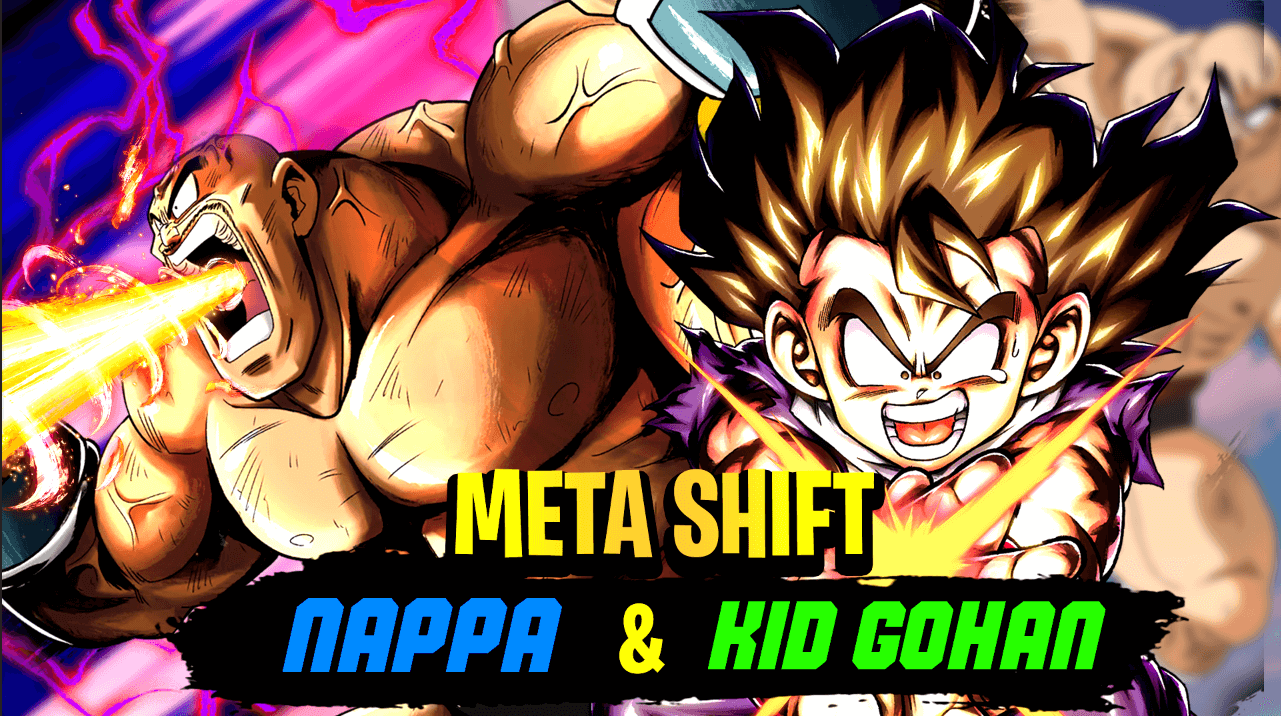 Nappa and Gohan are likely the last releases we get for this Team for the time being. Ever since Vegeta and the Saibamen got announced, it was obvious that the developers were not done with a Tag who basically was never meta ever before, so let's see if it's finally time for it to be relevant in PvP at high levels.

The Core of Vegeta - Yajirobei - Piccolo - Green Saibaman was already pretty solid, boasting deadly Offensive potential thanks to Saibaman's self destruct Effects, and Piccolo-Vegeta-Yajirobei powerful Special/Ultimate Moves. What it definitely needed was a Fighter that could help it defensively, and Gohan partially does that thanks to his Revival Effect and Strike Cover. The reasoning for "partially" is that he's not a Tank at all, instead he's a pretty fragile Offensive Fighter with a couple survivability Effects on top. In terms of Damage, to say he's Blast focused would be an understatement, as his Strike Damage is really bad, so he might feel clunky in a Team with a mixed Deck such as this one ( and in turn, Fighters like Yajirobei and Vegeta would also benefit for a more one-sided Deck Strike wise ). Still, Gohan has some decent synergy with Piccolo, so his toolkit as a whole might feel as an upgrade over Saibaman for some players, while others might still prefer Saibaman's capability to take out a specific opponent at will.

On the other hand, the competition for Nappa on this Team is basically non-existent, so he's an obvious upgrade color-wise. As a whole, he fits on the Team really well, mainly thanks to his capability to swap Blast Cards to Strike Cards on switch, something that fixes the issue of this Team's mixed Deck quite effectively. As a result, he's the perfect third Fighter to team with Apegeta+Piccolo/Gohan. He's a well-rounded Offensive Fighter, that benefits from decent stackable Buffs, Arts Draw Speed through Main Ability, and some utility with Anti-Special Cover, Healing and situational Lock-In he can easily rush a specific opponent with.

The final state of this Team is pretty satisfying, it might not have revolutionized the Meta but players that want to rank up with it won't be disappointed.

Frieza Force is another interesting, strong Team that has shaped up recently. Apegeta - Zenkai LF Frieza -  LF FP Frieza might be one of the most cohesive Cores in the game thanks to how it combines Offensive potential and foolproof Defensive capabilities. It's hard for any new Fighter to fit on a Team like this, because even if Nappa might be the best Blue option for Frieza Force, that doesn't guarantee he'll improve the Team significantly as he might not be the best option to use in enough matchups. In fact, it's obvious he can't replace Zenkai LF Frieza due to the lack of Support, and replacing Apegeta or FP Frieza is also a hard sell since both of them are more versatile than him thanks to their Defensive Effects.

Him being the absolute best Blue option for the Team is also not clear-cut, as EX Frieza BLU is a very strong Blast Focused blue option which fits amazingly well with both FP Frieza and Zenkai LF Frieza. On the other hand, Nappa fits much better with Apegeta, and has a bit more utility which might make him more consistent against some opponents. Still, it's probably not worth to pull for this Fighter just for his Frieza Force synergy, as he's not a staple for the Team at all.

If Nappa struggles to be relevant on Frieza Force due to how competitive the main trio is on that Team, you can imagine it to be even worse for Gohan on Hybrids. The triple LF Gohan Core on the Team is top tier, as it dominates the majority of matchups. However, they could've used a great Green Fighter to help them, as they struggle against Gokua and durable Blue Fighters such as Angry Goku. While the new Kid Gohan is a good Offensive Fighter who can take care of those Fighters if he's given the chance, he's just not versatile as a whole to improve the Team in those matchups overall, as he just doesn't compare to Future Gohan or the other Revive Gohan in Damage and Utility. So, while the Team improves at facing Blue opponents with him in the Core, it becomes noticeably worse at dealing with nearly every other opponent, so it's not worth it.

He makes more sense on Son Family where the main is not as set in stone, and he'd replace LF SSJ3 Goku who just doesn't fit well on the Team at all. The Team also has a three revive units with the two Gohan Variants and SSB Goku, so some there is room to build some really annoying Teams to face.