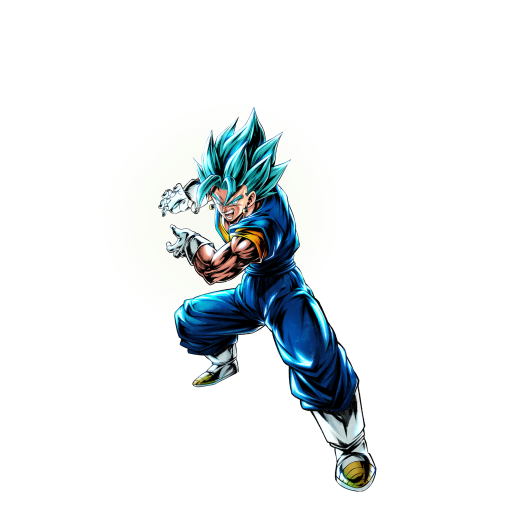 Yosha! The ultimate Fusion Warrior has arrived, and his overwhelming strength sets a new standard for Offensive Fighters.

Vegito enters the battlefield locked and loaded for carnage; he immediately has access to an Extra Arts Card draw, Strike Arts that draw Strike Arts and restore Ki, Blast Armor, Inflicted Damage, Sustained Damage Cut, Ailment and Attribute Downgrade nullification, and a unique Buff depending on the battle style of the foe he’s challenging.

As a lead, a crisis Fighter, an Offensive Pivot, or a Defensive Pivot, Vegito excels. Simply categorizing him as a Melee Type does a disservice to the rest of his hilariously broken toolkit.

His Special Move possesses one of the most coveted effects in the game - Switch prevention. His Z-Ability makes him a permanent fixture on 3 of the meta's strongest Tags. He negates Blast Arts when changing Cover. His Main Ability, and its resulting Ultimate Arts Card, is contextually stronger than an on-command Rising Rush.

Every aspect of this Fighter is exceptional - peerless even. Teams without slots dedicated to Vegito countering Fighters, or their own Vegito, simply cannot survive in this Meta. This is SP SSG SS Vegito BLU’s world, we were all just keeping it warm for him.

Not only do they possess Blast Armor, and have the potential to come equipped with special properties because of the two unique Strike Arts Vegito adds to his Team’s deck, they draw an additional Strike Arts the first two times they make contact and restore 5 Ki.

This effect is refreshed whenever Vegito leaves the battlefield, and essentially allows him to perform full combos against his foes even if he only begins with a single Strike Arts Card in his hand. If Vegito begins with a full hand, and the enemy Team has no solid answer for him, he can defeat enemy Fighters in a single combo without difficulty.

When Vegito is off the field, there’s still no safety from his rampage. If one of Vegito’s allies is targeted by an enemy Blast Arts during a Combo, he can cover change to negate it and push his opponent back to long range.

Even if Vegito's user guesses wrong, it's not as though Vegito is weak Defensively; his 30% Sustained Damage Cut and high base stats let him tank decently well.

Vegito can double down on his cover change by chaining his Special Move Arts Card after it. This Special Move deals Massive Damage and prevents switching, so it can easily obliterate an unsuspecting opportunist in an instant.

Just the threat of this interaction is usually enough to dissuade Vegito’s foes from practicing optimal Blast combos while he’s on standby.

Everything described thus far factors into Vegito’s dominance, but the last two aspects of his kit are what let him dominate any match-up.

Vegito’s Extra Arts Card is a lunging attack that removes all of his target’s Buffs the first two times it lands, which can close out a game by itself if it makes contact with an enemy that relies on Buffs, like Crisis Fighters or Fighters with one-time Damage Buffs.

It can even erase a foe’s Sustained Damage Cut, to ensure the kill on a presumptuous Defensive Pivot who entered the field to defend a comrade. The fact that it chains into any Arts Card and inflicts a sizable +25% Damage Received Debuff makes it an excellent Combo starter.

BE PERFECT IN HELL!

Vegito’s Main Ability is what miracles are made of. It provides the omnipotent fusion with a 20% Heal, a +40% Inflicted Damage Buff, 50 Ki, a +20% Sustained Damage Cut, and draws the most powerful individual attack in the game, the Final Impact Rush Ultimate Arts Card.

This Blast Armor-possessing charging attack is the first in the game’s history to have a Supreme Damage modifier, and it is essentially impossible to mitigate. This attack negates all Sustained Damage Cut effects, Endurance effects, and even special Cover Change effects such as SP FP Boujack PUR’s.

The Main Ability that bequeaths this orbital nuke even has the courtesy of destroying one of Vegito’s Cards to give it a guaranteed spot in his hand. This attack defines Vegito and can turn most Fighters in the game, even those with color advantage over Vegito, into vapor.

Landing this attack relatively early in a match can guarantee a character lead. The only downside is that this warhead is so useful in the early and mid-stages of a game that it’ll rarely stay in Vegito's arsenal long enough to enable a Legendary Finish.

Trips Over Himself Occasionally

This isn’t a particularly glaring fault, nor is it even relevant most of the time, but some aspects of Vegito’s kit conflict with each other. If Vegito is used as a lead and lands a Strike Arts before spending any of his other cards, his guaranteed Extra Arts card draw that activates when he first enters the field can be overwritten by his guaranteed Strike Arts draw.

Another minor issue is that the Card destroyed by Vegito’s Main Ability to make room for his Ultimate Arts is random, so if Vegito has a Special Move Arts card in his hand and he simply needs an injection of Ki in order to guarantee a kill on an enemy Fighter, it’s possible for Vegito’s Main Ability to destroy that Special Arts Card in the process.

While these are uncommon, they are interactions that players using Vegito need to be mindful of when using him.

This Tag needs no introduction. Vegito fits onto this Team as its strongest Fighter by far, a running theme for all of Vegito’s Teams, resulting in a line-up with hardly any weak points.

Vegito himself synergizes fantastically well with Fighters that accentuate his strengths, like SP SSJ2 Kefla GRN and SP Vegito YEL, the latter being able to draw a Special Move for his Blue counterpart.

EX Gogeta RED’s scaling Damage Support, Team Healing, and Ki Support makes switching in Vegito and letting him stomp all over the enemy party an absolute breeze. SP Super Vegito PUR fittingly acts as Vegito’s answer to problematic Green Fighters, and he has no trouble doing so.

Vegito functions as a brutal Melee Type who appreciates the Defensive efficacy of SP Fusion Zamasu PUR, one of the few Fighters that can claim to rival Vegito’s utility. This Team’s Defensive prowess doesn’t stop there, as it can easily accommodate SP SSJ Rage Trunks YEL, a strong Defensive pivot with some Support capabilities.

This Team is very similar to Future, subbing out Trunks for SP SSG SS Goku YEL and SP Mai GRN for SP SSG Goku RED. The Team maintains the same gameplan for the most part as well, utilizing some mixture of Support and Defensive utility to accentuate Vegito’s efficacy in combat.

Yes, it is very easy to fit SP SSG SS Vegito BLU onto the Son Family Team, turning it into a variant of the Saiyan Team. This Team looks to highlight Vegito’s strengths by pairing him with Zenkai 7 SP Youth Goku YEL.

The vast majority of strong Saiyans also possess the Son Family Tag, which is fantastic news for Vegito, a Fighter who can benefit from the Z Ability of SP Kaioken Goku BLU. SP SSJ4 Goku PUR and SP SFPS4 Goku GRN round out this Team’s devastating core suite of Fighters, with SP Raditz GRN, SP Saiyan Saga Goku BLU, and EX Raditz BLU rounding out the bench.

A Pure Strike Equip is necessary for Vegito due to reasons laid out in How Equips Really Work. This Equipment is optimal for the Future Team.

In the optimal God Ki Team, this Equipment is replaced with Come on! Let's keep this fight going! due to the Team being made up entirely of Saiyans.

In the optimal Fusion Warrior Team, this Equipment is replaced with Alright!!.

This Equipment will further increase Vegito's Strike Damage by amplifying the effects of the Pure Strike Equip. Alternatively, Awakened Master Korin No.1 can be used here, granting Vegito access to a Pure Blast Defence Buff at the cost of lower Strike Attack.

In the optimal Fusion Warrior Team, this Equipment is replaced by Power Unleashed due to the Fusion Warrior team having access to very large Strike Attack Z-Abilities.

Lastly, this Equipment provides this Fighter with additional Damage to his already powerful Special Move, as well as increasing his survivability. Similar option to this Equipment are: Let's Go, Vegeta! and You're Sure to Win!.