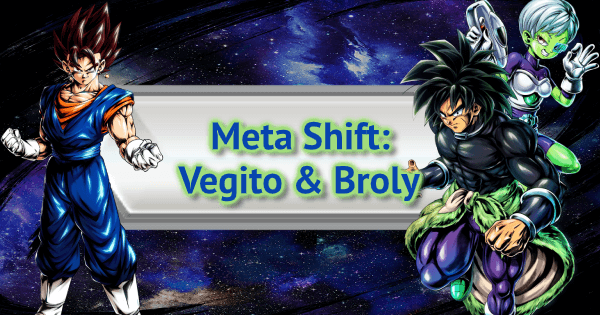 This Update brought a new Legends Rising Banner, featuring two new variants of fan favorites who have been anticipated for a long time, namely Vegito and Broly. The former’s release is particularly significant since Fusion Warriors hasn’t had a serious improvement for a long time, while the latter mainly joins an already terrific Team.

The other interesting thing here is the Banner model, in fact x999 souls for new Fighters comes back which felt much needed for the previously bland Legends Rising Banner.

The Fusion Warrior Team finally sees a strong release. SP Gogeta GRN wasn’t that bad, but he surely didn’t make Fusion Warriors go up a tier since his weaknesses made it arguable for him to even be a Core Fighter. On the other hand, the new SP Vegito YEL just feels massive ( something that can be said for most of the Transforming Fighters at the time of their release). His stats are obviously very high and they are magnified by the Team’s exceptional Z-Abilities, but the most exciting thing is his kit for sure.

When untransformed, his Unique Abilities are nothing special and even his Main Ability looks weird, because drawing a new hand without restoring Ki isn’t optimal. On the opposite, in his Super Saiyan state, he becomes a powerhouse, boasting great Offense and Defense. He’s a fast paced Fighter that can generate Arts Draw Speed (although not consistently) and takes advantage of his Ki managing capabilities to quickly hurt the opponent massively with his Special Move (which is generally about as strong as an Ultimate Move). He’s a bit better right off the bat than later on, since some of his Boosts expire, but his Damage Boost staying up for the whole Match is good enough.

Overall, Fusion Warriors finally get a big Boost and they’ll surely be one of the most interesting Teams of the next PvP season.

SP Broly:Cheelai BLU joins a Team that already had a very good Blue Fighter, SP Vegeta BLU, which happened to fit perfectly with his Teammates Deck wise. SP Vegeta BLU has been a very annoying Fighter to face, since his kit allows him to recklessly move forward and inflict impressive Damage from the start. It’s hard to consider replacing him, but SP Broly:Cheelai BLU puts up a very good case.

First of all, his Z-Ability only Boosts Sagas Warriors at 6*, which is unfortunate but still more than SP Vegeta BLU can say about his selfish one. The two Saiyans are quite similar, because they’re both very strong Strike Damage dealers, however Broly’s Blast Damage is very good as well since his Damage Buffs can build up to 110% Damage Buffs by continuously switching out throughout a Match, which isn’t that hard considering his Sub Count is 7 for three of his switches. This isn’t all, as SP Broly:Cheelai BLU is a very good Dragon Ball generator as well.

Overall, SP Vegeta BLU is better right off the bat, but SP Broly:Cheelai BLU makes him better in the long run. Specifically, him having a low sub count speeds up the Team significantly and his Damage as a Last Man Standing is just off the charts.

There is no contest here, SP Broly:Cheelai BLU is just flat out better than EX Recoome BLU and his synergy with SP 1st Form Frieza PUR is just massive, since he’ll start inflicting incredibly high Damage very early thanks to him. The Team needed somebody like him, because he’s the only Fighter of the Team that can be an Offensive powerhouse for the whole Game.

This really steps up Frieza Force, as it already had a fantastic Support and a really good Tank. SP 1st Form Frieza PUR and SP Broly:Cheelai BLU both being able to affect sub counts makes very interesting combinations possible, as the latter could be able to hop back on the field after just 4 timer counts if everything goes right.

It’s also worth noting that his capabilities to disrupt Opponent’s Dragon Balls and generate his own pair really well with SP Ginyu Goku RED’s Dragon Balls’ Stealing Main Ability. You’ll heavily outpace your Opponent at Rising Rushing if you play these two together.

Frieza Force surely surpasses Lineage of Evil in relevance after this Update as it’ll have the means to compete well against other Top Meta Teams.

This Banner is honestly very good, which is rare to see for Legends Rising. Both SP Vegito YEL and SP Broly:Cheelai BLU have an immediate impact on the Meta and the featured fillers are both fitting and pretty good. You should pull on this Banner if you’re looking to improve any of the Teams discussed above.