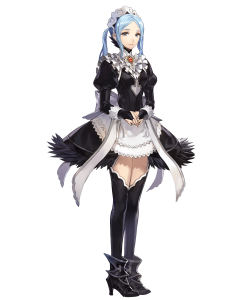 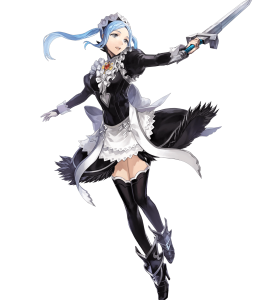 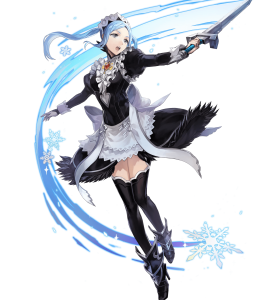 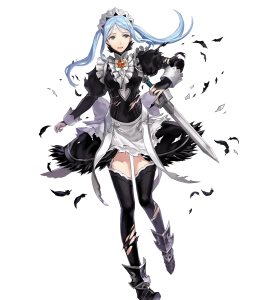 A Song of Ice and Fire (Offensive Dagger)

Flora will want to take an Attack boon to maximize her damage output and a Speed bane as her Speed is largely useless already.

The Hoarfrost Knife is a very interesting and effective weapon. Firstly, the simple -1 reduction in Special cooldown is always appreciated and works wonders on a unit like Flora who can make great use of Iceberg/Glacies thanks to her ridiculous base Resistance. On top of this, it allows Flora to achieve guaranteed follow-up attacks against melee units that can counterattack, which make up a good portion of the arena meta. With the additional +20 to Defense during combat when initiating on melee units that can counter, Flora doesn't have to worry about getting OHKO'd on the counterattack nearly as much as she'd have to without the boost.

Draw Back and Reposition are always appreciated as Assist skills, although Swap can also be useful for positioning Flora to bait enemy mages.

Iceberg will deal a solid amount of damage thanks to Flora’s ridiculous base Resistance. With Hoarfrost Knife, Iceberg will have a low cooldown of 2, allowing it to be immediately activated every time after combat if one decides to run Special Spiral on Flora. Glacies is a great option as well that will deal even more damage, and could be considered if one decides to run Quickened Pulse.

Atk/Res Solo works perfectly for Flora, giving Flora a significant boost in Attack and Resistance, her two most important stats for an offensive build. The boost in Resistance will work great for Flora, not only increasing her magical bulk but increasing the damage Iceberg/Glacies will be dealing as well. The only condition for the skill, not being adjacent to any teammates, isn’t particularly difficult to pull off. Sturdy Blow is another good option, giving a boost to Flora’s Defense instead of Resistance on initiation. Fury is another option that can be taken instead, increasing Flora’s stats all around while also making it easier for her to activate Ploy skills. Fury will synergize particularly well with Desperation if one decides to run that on Flora.

Special Spiral will work wonderfully with Iceberg, allowing Iceberg to be immediately ready for activation once Flora manages to activate Iceberg normally once. Special Spiral is by no means necessary for Flora to shine, however, and Quick Riposte is still a good budget option that will allow her to retaliate and eliminate enemy mages that initiate into her with ease. Desperation can also be a decent choice, although it is reliant on Flora both matching the HP requirement and attacking melee units that can counter her in order to work. Forgoing Quick Riposte will also significantly hinder Flora’s combat potential on Enemy Phase, and is recommended to be taken as the seal if not taken as the B slot if Special Spiral is also not being run.

Given that Flora has one of the highest base Resistance stats in the game, she can run any Ploy skills in the C slot with confidence she’ll be activating them almost all the time. Attack Smoke or Speed Smoke are also good options that can be taken instead that synergize well with her Defense and Resistance debuffs from Hoarfrost Knife.

Quickened Pulse allows Flora to initially activate Iceberg more easily before Special Spiral takes effect. Alternatively, Quickened Pulse can be paired with Glacies instead to allow for a massive Special proc. Flora could also opt for running a Ploy seal to match Def Ploy in the C slot. A simple stat boosting skill such as Atk/Def can be appreciated as well. Distant Defense will also work nicely on Flora, making mages have a very hard time to deal any damage to her on Enemy Phase while also increasing the damage Iceberg/Glacies will be dealing on the counterattack.

Flora still prefers +ATK -SPD as her IVs, as with this build she will be aiming to OHKO units if possible.

The Hoshidan Summer weapons (Sky Maiougi, Cloud Maiougi, Dusk Uchiwa) make for good choices for Flora, allowing her to deal effective damage against different types of enemies (armored, dragon, and cavalry, respectively). What separates Flora from the other daggers with slightly higher Attack than her (Hoshidan Summer Xander, Sothe, Kagero, Spring Kagero) is the fact that Flora is not a colorless dagger, but a red dagger instead. This will mean Flora will be dealing more damage against green units than the other daggers will be able to, at the cost of having a weapon triangle weakness to blue units. Ideally though, another teammate should be dealing with enemy blue threats anyways. An Attack refine is preferred on all weapons as it will scale well with effectiveness, providing more than just the base +1 to Attack that it may give on first impression.

Death Blow is preferred for the A slot to maximize Flora’s damage on initiation, but as Atk/Res Solo already gives a very good +6 boost to Attack, it is by no means necessary unless one is willing to invest heavily into Flora. Atk/Res Solo will also work on Enemy Phase, so one should keep that in mind if deciding to run an Enemy Phase oriented skill such as Vantage.

Guard is a good option for the B slot, as it will prevent Flora from reducing the enemy’s Special cooldown if she is unable to OHKO them. Vantage is another good option, allowing Flora to counter-attack and kill often if she is being attacked by a unit her weapon is powerful against.

As Flora’s base Resistance is already so high, she can continue to run Def Ploy with ease without needing any sort of boon in Resistance or a Resistance-increasing skill.

Attack +3 is the preferred choice of seal to maximize Flora’s damage, and it will scale well with weapon effectiveness.

Flora's dagger, the Hoarfrost Knife, makes for a very spicy weapon. Many dagger units have the problem of not having the Defense needed to handle Distant Counter units; Hoarfrost Knife takes care of this issue by providing Flora a smoking +20 boost to Defense in combat when she initiates on melee units. On top of this, Hoarfrost Knife accelerates Flora’s Special Trigger and guarantees she can double attack any unit that can counter her on initiation, making for a very scorching combination.

Atk/Res Solo is the charring first in what is likely to be one of many future similar skills to come. A steaming skill indeed, it provides a wonderful +6 to Attack and Resistance during combat on both phases for Flora with the only requirement being that she not be adjacent to any teammates during combat. This works particularly well for a ranged dagger unit such as Flora, and overall it should not be a very roasting requirement to work around during combat.

The heated state of the meta calls for many melee units to have Distant Counter, making Flora’s niche Hoarfrost Knife work particularly well. Compared to other torched daggers who can’t take a counterattack at all when attacking into these Distant Counter Units, Flora smirks as she boils them with ease. She can even survive a searing neutral Slaying Edge + Distant Counter + Wrath Ayra! That being said, even with the toasty Defense boost, Flora is far from invincible as her physical bulk is 76 (HP + Defense) when initiating. While impressive, this is far from making Flora untouchable, and one should take care to not be too ambitious with her powerful weapon so as Flora does not get scalded herself.

All in all, Flora can bring a fiery passion to one's team when needed given her solid combat performance. With a proper team supporting her, Flora will be able to perform blazingly well, and should not be coldly overlooked. Given her great base kit and interesting playstyle, Flora is sure to be a hot topic for quite a while.

Hoarfrost Knife is definitely one of the better dagger weapons in the game. On top of guaranteeing follow up attacks for Flora on melee units, Hoarfrost Knife gives a -1 cooldown to Special trigger and allows Flora to safely initiate on Distant Counter melee units thanks to the +20 Defense boost.

Sitting at 38, Flora’s Resistance is one of the highest in the game, allowing her to tank mages with ease. This also allows Flora to activate Ploy skills on just about any non-buffed unit.

With an abysmal Speed stat of 23, Flora will almost always be getting doubled. Thankfully her weapon, the Hoarfrost Knife, guarantees her a follow up attack on melee units that can counter her, making her poor Speed less of a problem. Thanks to her massive Resistance, Flora can also usually deal with getting doubled by enemy mages as well.

Flora has a very low base Defense of 18 that, in combination with her low Speed, practically guarantees that any physical unit with even just somewhat decent Speed will knock her out if they manage to initiate on her. Ideally, one should not allow Flora to be initiated on by any physical units if possible.

I managed to make a -Spd Flora fast!
So I gave her Darting Blow, which gives her +6 during combat. Then I gave her Spd+3 as a seal. I then decided to Ally Support her with L!Robin so that she would receive +1 or 2 speed during combat. I decided to put my B!Ninian in the same team for her Fresh Bouquet+, which gives Flora +4 speed if adjacent to Ninian. My Ninian also have drive Spd, which mean +3 speed during combat. And becuase L!Robin is a legendary hero, she grants allies with Earth Blessings +3 Hp/Spd.
So Flora would get around +21 speed, giving her 41 speed!

Anti-Range Flora
At 75% health Flora will be hitting twice at +7 Attack and Res before the target gets a chance to retaliate. This should allow for Flora to take down most Mages, Bow and Dagger units while taking minimal damage.

For her Seal either QR3 or Attack+3 would be ideal

With the right buffs and debuffs this build can OHKO a neutral L!Hector.