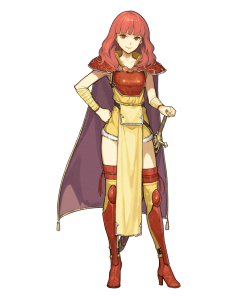 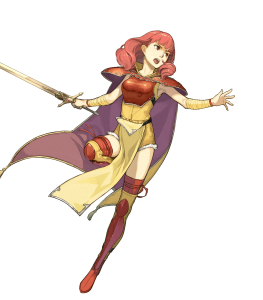 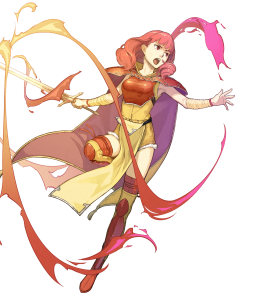 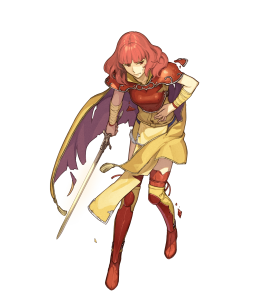 WHERE DID THE LIONS GO?! (Aether Raids Tank)

Celica’s unique skill allows her to massively increase her offensive potential by attacking twice. Unlike follow-up mechanics which can be countered by skills such as Odd Follow-Up and potentially get hit in retaliation, attacking twice cannot be prevented at the time of writing and allows Celica to protect herself from any retaliation if she defeats her foe with two attacks.

Double Lion being a skill also allows Celica to utilize any weapon of her choice, allowing her to uniquely quad strike with any weapon (instead of being limited to Brave weapons). Lastly, a 300 SP Passive B skill does enable Celica to outscore infantries of a similar stat total in coliseum related modes.

Royal Sword provides Brave Celica with unprecedented flexibility that could work in a player-phase and enemy-phase focused build.

Royal Sword received a significant buff from the refinement by laxing the condition of the on-hit acceleration to be initiating combat while retaining her original condition of an ally within 2 spaces. This flexibility allows Celica to form a basis of her 2 predominant strategy; a player-phase focused Galeforce playstyle, or turtling with her allies in a defensive tanking playstyle.

The same could be said for the unique refinement. It works hand-in-hand with Double Lion and Galeforce to allow Brave Celica to repeat her double attacking feat by providing her both cooldown reduction and heal after combat. In another perspective, the healing and cooldown reduction can be used to charge more powerful specials in combat and provide sustain.

As Brave Celica is a sword infantry hero, she has access to a variety of passive skills that improve her combat capability in several different roles. This includes Time’s Pulse for Galeforce purposes, or Null Follow-Up and Spurn for tank strategies.

Celica’s base Resistance is only 24, leaving her vulnerable to KO by magic-based attackers. Celica should be particularly wary of ranged mages who can catch her out with their good attack range, and potentially dragons.

Celica’s visible speed is on a rather high side, and this is potentially compounded by the additional 3 speed from Royal Sword. This meant that chills that are based around speed are very likely to hit Brave Celica. This includes the Bright Shrine in Aether Raids

Mystic Boost is a wonderful skill for B!Celica, indeed, this unit have two Skills : Her Sword and her Double Lion.

This set is based on the second one : Double Lion

If The unit take ONE damage, the skill have no longer his effect. If Mystic Boost (1, 2 or 3) is used, she never take damage.

So, if you combine this with Swords we have to much set :
No damage : With the Firesweep Sword and 4 Hit without counter (Except C-Disrupt)
No more Armor : With her Armorsmasher+ with a boon in atk
Special ? : Guard Sword+
13 Healing : Royal Sword with refine, Double Lion isn’t the must to have, Spurn or another MysticBoost(21 HealPerFight)

This is a build which allows Celica to attack and quad most physical units, take no damage due to the large defense buffs, and heal off the potential damage with her weapon. A speed asset is taken over attack to reduce the amount of damage lost from the damage reducing B slot skills that a lot of people run on speedy infantry units (but an attack asset will probably work pretty good too depending on merges). Only strong and bulky lance units can resist and potentially KO Celica, so watch out for b!dimitri and b!hector.

-shadow sword &amp;amp;amp; double lion combine for a consecutive 4 hits without interruption, but not without counter if the enemy survives all 4. This build is built to ensure that is impossible.

-shadow sword, flashing blade, &amp;amp;amp; Luna combine for an effect that only brave Celica is capable of: activating your special twice without enemy interruption.

Even though this build has been submited before, I wanted to release my own to give more insight, as this build is best played with certain team compositions.

For boons and banes, just be sure that her ATK and SPD don'tt end up being the bane. Neutral also works really well.

The build is the usual one for anti-armor B!Celica, with some changes. I prefer the +Spd refine for Armorsmasher, as armor units won't be the only ones you will encounter, she may face really speedy units. +Atk refine is just overkill, as she already gets a lot of ATK with Death Blow 4, Odd Atk Wave 3 and other buffs. The point being, she will need those few speed points more than the attack ones.

Now for team composition. At full HP, being able to use Double Lion, B!Celica will OBLITERATE any armored unit, even blue ones (unless they have a lot of merges and have some kind of dangerous build).

By putting a refresher (preferably L!Azura, as the extra move makes Celica even deadlier) and a healer with Physic (so they can heal after she gets refreshed) Celica will be able to take down 3 units in the first turn she attacks, as she will probably kill most units (even non-armor) without taking a hit. After killing the first one, refresh and heal her to kill another foe. By that point, she should already have Galeforce ready. For the third engage, assuming there's only one healer and one refresher in the team, she won't be able to take advantage from double lion for this one, so make sure to kill blue units first and leave the ones she can OHKO for later.

The last unit is up to choice. The best options would be a unit with a chill skill and ploy skill (debuffer), another healer with Physic so she can take advantage of double lion when facing the third foe, another refresher to give another move to her to go for the full swipe or to refresh the healer so she can get double lion for the third time in a row, or a green mage to check on blues for her and to have damage in case something goes wrong. I highly recommend Gunnthrá, as she can both debuff using her Chilling Seal and a ploy and do damage if Celica needs to kill someone she isn'tt able to, as it may happen.

A pretty standard set, very powerful. Galeforce would normally not trigger in one round of combat, unless celica is quadding, so she is run on a team with infantry pulse so she can get a turn one galeforce. She has very strong offenses however double lion does need support to stay effective for more than one combat.