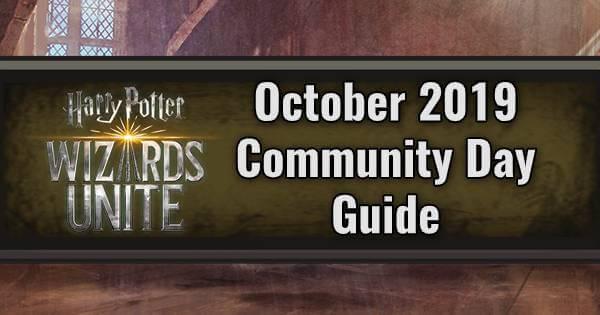 The fourth Wizards Unite Community Day is coming up later this month! Dust off your Defense Against the Dark Arts textbooks and get ready to fight off the forces of darkness. This guide will help you with details on the event, as well as prepare and strategize so you can make the most out of the day.

For our newly minted members of the SOS Task Force, Community Days are special, limited-time events that run for three hours on a given Saturday or Sunday once per month. The October 2019 Community Day is set for Saturday, October 19th. This Community Day will be different from past Community Days in that it will happen over the same time frame across all time zones; it will run from 11:00 AM until 2:00 PM during your local time zone. According to the official announcement, the Wizards Unite team is going to use this approach to timing for all future Community Days.

For the three hours that Community Day is live you’ll experience a lot of benefits, with Oddities and the Tonic for Trace Detection being put front and center. The benefits are as follows:

We’ll be back in a little bit with more information about how to best prepare for, and make the most of, this Community Day so be sure to check back later!

Bugs and Reschedule for Early Timezones

We are rescheduling #WizardsUnite Community Day for regions UTC+13 and UTC+12. We will announce the make-up October Community Day soon, please stay tuned. We apologize for the inconvenience.
All other regions (including UTC+11) will have Community Day at the scheduled time. https://t.co/WnQhDlGR2m

After the bonuses went live, players reported issues with Tonic for Trace Detection not functioning as advertised (not all spawns were Oddities) and Doxy Droppings and Werewolf Hair Tufts not being awarded for players on those SOS Assignments.

It seems that all of the issues have now been resolved though. Players in later timezones should, hopefully, have a smoother and bug-free experience. (Thank you, APAC!)

Players have reported that the Stamina of Werewolves, Vampires, and Doxies have all been buffed for the event.

Here are the new Stamina values and the maximum number of hits required to defeat each one, depending on Profession:

Note: The above assumed all stats relating to Power have been maxed and excludes Critical Hits and the use of Potions (and therefore any Professor conditional buffs). It is only a baseline of the worst case for each Oddity and Profession. For reference, here are the expected Power stats for each case: