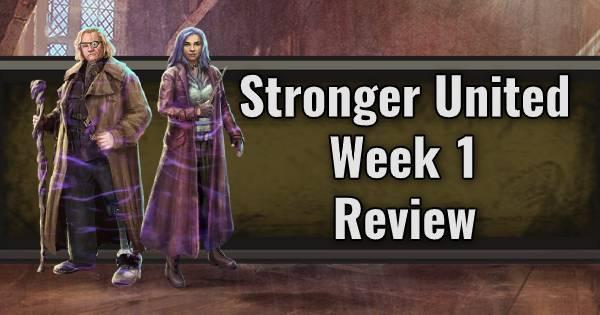 Week One of the Stronger United Brilliant Event wrapped up earlier this week, so let’s take a look back on what went well last week, what maybe didn’t live up to the hype, and how this compares to the past Brilliant Events. Please remember, this is all just personal opinion so if you have different thoughts about the first week of Stronger United be sure to sound off in our Community Section!

There were a good number of things that worked well for week one, and the first thing that really stuck out to me was the set of rewards for the event tasks. The standard tasks held up to past rewards, but what really put these tasks on the next level was the special set of Bonus Assignments. Completing this set of tasks wasn’t too too hard, especially since you’re already out and about returning Foundables to find the event’s Trace Encounters. The 2000 XP reward for completing the whole set was just too good to pass up

I appreciated the attention that was given to Dark Detectors, both through the event tasks and the special bundles offered in the store. Despite being in the game since the beginning, I always tend to forget to use Dark Detectors, even when I’m farming the nearby cluster of Inns to refill me Spell Energy. With them being in every event bundle and lots of the event tasks, it got me in the habit of using them to generate more encounters which really came in clutch for finishing out the special bonus assignments.

The Not So Good Stuff

While the tasks and Dark Detector emphasis were nice, there were a couple things that fell short for Stronger United’s first week. The first of these was the bundles offered through Diagon Alley. There were some okay deals, but if you weren’t in the market for Dark Detectors then they kinda fell flat. Most of them didn’t really offer enough of a discount to be worth it and they felt more like a vehicle to push Dark Detectors and the other parts of the bundle didn’t really stick out or offer enough of a bargain to make it worth the cost.

The theming for this event also was a little bit of a let down. Fighting Forces was such a strong event as far as theming goes, and it tied in really well with every event for Dark Arts Month, spoopy season, and October in general. This month’s events just seem a little more disconnected and not as cohesively tied together. Stronger United and its focus on the Ministry doesn’t exactly line up with the Legends of Hogwarts event happening towards the end of the month. I know that November isn’t a month that lends itself to as cohesive theming as October or December, but it’s still a little disappointing to see a more hodgepodge approach to this month’s event compared to the aesthetic synergy of last month.

Finally there was the bug in update 2.6.0 that delayed the start of this event by a week. While bugs are just part of dealing with computer code, it completely killed the ability to play the game for a large portion of the player base and while it fortunately was caught early, it still felt like something that should’ve been caught before being pushed out. While I like not having a gap week in between the two event weeks, I want it to happen because the Wizards Unite team decided to consolidate them and not because there’s a game breaking bug in the newest update.

So there you have it: the good, the bad, and the Moody; so now it’s time to Unite them together. Stronger United week one was…fine. There wasn’t anything really wrong with it once it started, and it’s biggest shortcoming was mainly that it had to follow up the all-around success that was Fighting Forces. Hopefully week two pulls out a little more dazzle dazzle and doesn’t come with a Killing Curse in the code.