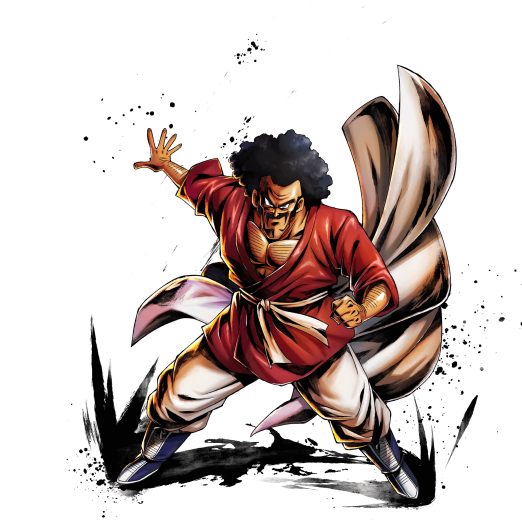 Anyone familiar with the Dragon Ball series may remember the hilarious face-off between Mr. Satan and Perfect Cell during the Cell Games.

This WWE Fighter parody threw his weight around only to get absolutely demolished by Cell, who didn’t even blink. SP WC Hercule RED is based on this exact version of Mr. Satan and everything about him is fun to play.

The problem is, his stats are too low for PVP and without any viable Tags, this Fighter also lacks access to Equips that could make any kind of difference.

That’s not to say he can’t be in a PVP Team at all, only that he ends up being the third wheel to a two Fighter Team which greatly benefits from letting him die once before switching out to someone stronger, not the strongest recommendation.

Not much can be said about a novelty Fighter like this, but his undeniable--if heavily balanced out--Team support cannot be glossed over. Every Ability this Fighter has is pure gold.

His Main ability makes it virtually impossible for the Enemy Team to use Blast Arts Card for 15 timer counts by raising their cost to 99.

The Champion Call Unique Ability all Teammates Buffs to Damage and Ki Recovery Speed for as long as Hercule is below 30% Health and his Endurance Unique Ability revives him back to 20% Health the first time he is killed.

The combination of these two makes him a great starter with the intention of letting him take one hit before switching him out and letting your remaining Fighters ride the rest of the Match with Boosted stats.

Lastly, his Z-Ability has no Tag requirement and instead reduces Special Move Arts Card costs by up to 10.

Beyond Abilities that actively encourage making him the third wheel to a two Fighter Team, SP WC Hercule RED has one held Special Arts card.

Since his own Special move begs the enemy to swap out and take him out in one shot, this and his Z-Ability are clearly mean to be used by the other Teammates with SP WC Hercule RED watching from the sidelines.

Since his Z-Ability has no Tags associated with it, he can seamlessly be added to any Team to provide massive support and control over the combat loop without even throwing a punch of his own.

If he does deal Damage, it should be through landing his Special Ability which reduces Teammate substitution counters by 10 to quickly swap in and save SP WC Hercule RED from potential harm.

For the low cost of 10 Ki, SP WC Hercule RED can force himself and the Enemy Team throw out and re-draw held Arts Cards.

This doesn’t mean the Cards held before his Extra Move is activated are permanently destroyed for the rest of the match, but it does provide the Player with the opportunity to re-shuffle their held Cards to draw more favorable ones for his main Fighter. However, this also means the Enemy has a chance at the same.

It's not an exaggeration to say SP WC Hercule RED fits better alongside Hero Rarity Fighters than he does among Sparkling or even Extreme Fighters. His stats are some of the worst and considering the novelty factor of this Fighter, its likely that the game will intentionally keep it that way.

It would take a lot of Soul-Boosting, Summon farming, and good old-fashion level grinding to max out his potential and that still wouldn’t be enough to make him a competitive one-on-one Fighter.

His awful stats are only made that much worse with Equip options that do very little in the way of Boosting any stat by a meaningful amount.

The bad news is that beyond Element, this Fighter has no viable Tags. Oddly enough, this is also the good news. SP WC Hercule RED doesn’t Buff Strike Damage any more than he Buffs Blast Damage, and his Z-Ability gives any Team a huge Arts Card cost reduction and isn't tied down to any specific Tag.

This is what really drives home his utility as a third wheel. SP WC Hercule RED should see as little combat as possible, but just being on the Team gives everyone else a huge advantage in any situation.