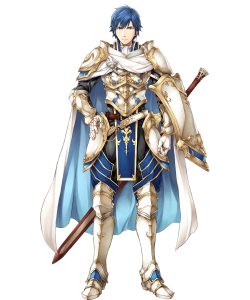 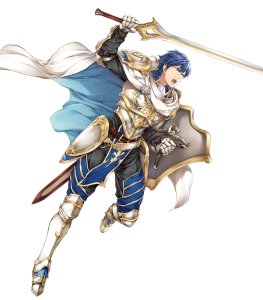 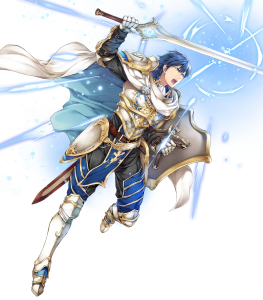 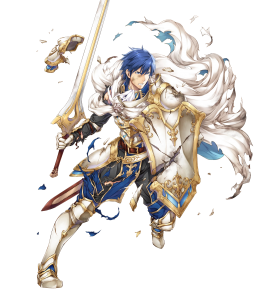 Initially a less than impressive weapon, Chrom’s exclusive Sealed Falchion—and by extension, his overall performance—received a major improvement through its unique refinery.

In addition to adjusting its activation requirement so that he may benefit from its effect consistently, Sealed Falchion’s stat boosts are substantially greater and provides the highly valuable ability to deny enemy follow-up attacks; altogether, this weapon makes Chrom a much stronger standalone combatant than previously before. Lastly, Sealed Falchion is also notable when utilizing Chrom in a cavalry-exclusive setting, as sources of dragon effectiveness are not readily available in such teams.

Chrom’s strong base Attack stat of 37 provides him with fantastic raw damage output and enables him to make excellent use of his PRF’s latent potential. With proper use, he can quickly accumulate enough offensive might to frequently OHKO opposing foes.

His sturdy physical bulk of 75 allows him to stand tall against incoming physical threats and bait them without incurring significant amounts of damage in return. This also serves to strengthen the power of Defense-scaling Specials.

Being a cavalry unit allows Chrom to differentiate himself from his infantry counterpart, as his extended mobility and range make a Player Phase setup much more attractive of an option. Additionally, this provides him access to class-exclusive buffs for easier team building.

Chrom’s status as a cavalry unit, while beneficial in some respects, also comes with various detriments; impairments such as an inability to traverse certain terrain, a debilitating weakness to cavalry-effective weaponry, and lackluster skill availability limit his overall potential substantially.

Chrom’s base Resistance stat of 17 is horrendous and renders him liable to receive significant amounts of damage from incoming magical threats, making it necessary to provide him with the necessary support to keep him from being easily OHKO’d by such opponents even with the assistance of his refined Sealed Falchion.

Chrom’s new sealed falchion refine grants him +5 atk/spd/def and stops a follow up on both phases if the foe is healthy, as well as the base effect altered to needing a field buff or being <100% hp to get an additional +5 to all stats. This would allow chrom to run more speed based build’s and I’m gonna do just that. Beware, this build requires some heavy investment. With a +spd boon, +3 chrom will reach 32 speed, A maxed out sealed falchion will boost you to 42 speed which beats out a neutral mareeta. Lull and rouse will further increase that to 51 speed total. Further investment can be made by adding dragonflowers or doing a merge project on him, but the goal was to get him over 50 speed

Cause there's no Chrom like Horse Chrom! Send your scabbard into shock! You need Horse Chrom, of course-Chrom! Grab your Flachion and slam the day away!

Alright he's become one of my favorites to play around with, the instant he enters vantage range he's going to do some very brutal things to whatever comes his way, and even before that I back him with Dancer Neph with Speed and Attack Tactic so he is going to be bashing skulls like he bashes training dummies. I've also got him with some repositioners to stop the nasty-waste mages from bad touching my horse boy.

Due to Sealed Falchion essentially being a Brazen Spectrum, it synergizes very well with Brazen skills due to the HP requirement needed to activate it. An +Atk, Def, or Spd boon can work very well with his set though mine is +Spd which helps with his doubling potential. Chill Def just helps him tear through enemies more and Atk Wave further boots his raw damage output after all the Brazens activate, but any Chill Skill or Wave Skill that isn't Res based will work very well for him. Reciprocal Aid is there so Chrom can reach the Brazen threshold more reliably when others are low on health or have enough health to activate the Brazens. Brazen Atk/Spd is only used here due to being easier to obtain than the 4 variant but if you have a Summer Wolt lying around, slap that A skill onto Chrom just to give him more Speed and Attack. This build is very fun to watch when activated and it shows the true power of the Exalt.

Stacked Brazen + Sealed Falchion gives him a whopping +19 atk, as long as .
+12 spd (from brazen atk/spd) brings him up enough to at least avoid doubles, if not double himself, hence why atk/spd is chosen over atk/def.
S-Supported with Quad Spring Chrom (Atk, Def Tactic).

This build for Chrom focuses on turning him into a player phase nuke at low HP. Getting hit by Archers, Non-wrathful staff healers, etc. Will usually result in his survival through virtue of his HP and DEF. However, he will probably lose a chunk of HP - which is perfect. Once below 50%, which is easy to achieve via combat or Reciprocal Aid, he doubles regardless of SPD (which makes taking a bane in it better than RES - I have both and can confidently say SPD is a better bane here) and gains the power to consecutively strike. With an ATK of 61 unbufffed aside from his prf; Chrom can easily eliminate most threats in Arena (assault too), GHBs, and RDs. Threaten Def is good here when you’re trying to turn him into a solo machine but buffs work instead. Ignis makes taking down bulky blues and armors in general easier and he doesn’t really need Bonfire for quicker procs as he kills things without it easily.