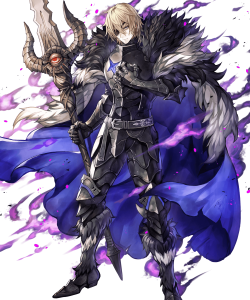 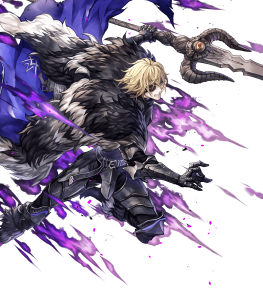 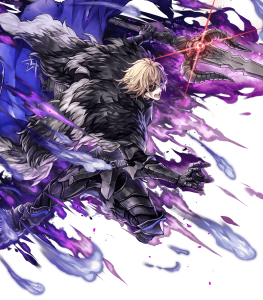 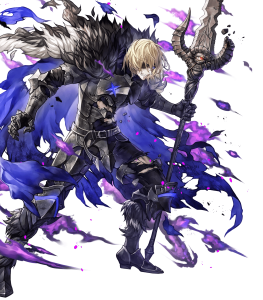 How Can My Little Dimitri Be This Bloodthirsty? (Ninja Yari)

No Talk To Me I'm Angy (Player Phase Offensive)

Fallen Dimitri's prf skill, Murderous Lion, is unique among its kind. This grants Fallen Dimitri a Canto skill, which allows him to use his unused movement+1 after he completes an action (a combat, assist, or terrain destruction - simply ending your turn doesn't count). This makes Fallen Dimitri the only infantry unit in the game able to use Canto skills, which grants him fantastic support ability and mobility for your team.

It also prevents the foe from counterattacking, essentially turning him into a Firesweep user. Because of this, he is formidable on Defense teams and shines during the Player Phase.

Dimitri's stats and skills solidly place him above average in the pack - his Attack is monstrously high at 42, his Speed is also very high at 40. His skills and prf are all heavily invested into Attack and Speed, granting him insane amounts of both to destroy everything in his Player Phase without fearing counterattacks.

In addition, his prf weapon, the Vengeful Lance, allows him to somewhat-circumvent followup denial by dealing 150% of his normal damage in a single hit to enemies who prevent his followup attacks, such as enemies running Wary Fighter or Sturdy Impact.

Like every Dimitri alt, Fallen Dimitri suffers from an abysmally low Resistance stat, making him extremely squishy to mages and dragons. He will be very vulnerable to magical damage if left out in Enemy Phase. This hurts his viability as an offensive unit in Aether Raids, since many enemy threats are magical and Dimitri's Murderous Lion movement generally won't grant him enough mobility to defeat an opponent and then retreat to safety through a convoluted enemy defense.

Fallen Dimitri is... straightforward but strange in how little he challenges the current meta.

The idea seems to have been for him to be a threatening Player Phase Firesweep user, but without a built-in cooldown acceleration or a Slaying effect, he has a difficult time activating the Galeforce Special and solidifying his role as a multi-turn, far-reaching threat. In this, even his Legendary alt surpasses him, as Legendary Dimitri's Areadbhar has a Slaying effect and additionally has 1 higher Speed.

Fallen Dimitri's prf weapon is also strange in that it only grants a roundabout form of Null Follow-Up, a meta skill for high Speed units to ensure that their Speed isn't wasted by opponent follow-up denial. Instead of nullifying follow-up denial, Fallen Dimitri simply does 150% damage in a single hit, which ultimately results in a net loss of 25% of his total potential damage, as well as losing opportunities to activate powerful Specials. Null Follow-Up has been on several prfs in the past, including Legendary Claude's Failnaught, so it's odd that Fallen Dimitri's Vengeful Lance would have this Def-based workaround. In addition, the additional damage boost is highly conditional and only activates in a small percentage of situations, despite Valentian Catria having the effect be unconditional on her own prf, released over a year and a half prior to Fallen Dimitri.

Finally, there is his B slot skill, which can be oppressive but ultimately the non-stat effect only benefits him during his Player Phase, leading him to be highly phase-dependent. Running meta skills like Spurn or, ironically, Null Follow-Up, to utilize his high Speed in order to mitigate some of the damage he takes means removing his prf B slot skill and abandoning what makes him unique.

Ultimately, Dimitri has potential and is far better of a unit than the vast majority of other infantry lance units, but the lack of meta skills or effects built into his kit means that he will struggle in high-end content in relation to more meta-focused units such as Legendary Dimitri, Mareeta, or F Kris.

Distant Ward: What units would even want it?
I ended up pulling a -Res NY!Selkie on my seemingly endless quest to get a single copy…
How to make Canto fair in Summoner Duels
Canto isn’t really “fair” in a gamemode like this, put simply. It kills half the…
How stupid... I mean how old is every one?
We have had pools like this before, but after a conversation with my husband we began…
I'm stuck bored out of my mind so
(topic deleted by author) 1 post - 1 participant Read full…
So since it has almost ended who actually took part in SD:R?
Not me⬇️ 38 posts - 26 participants Read full topic
Read More