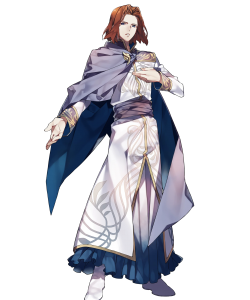 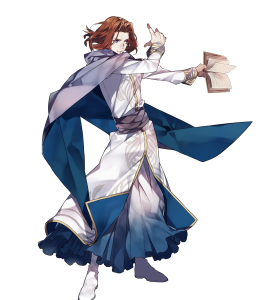 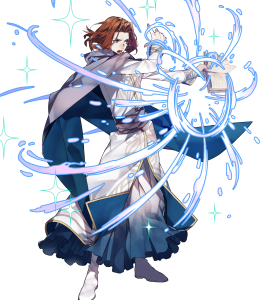 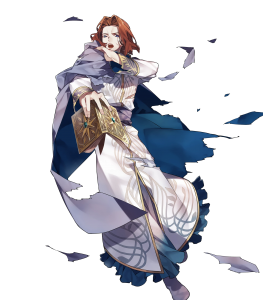 The very essence of Saias's viability, his unique weapon Wargod's Tome is essentially an accessible, free-to-play form of Broadleaf Fan, which in itself was already considered a positively renowned weapon. Here's why: its refined form grants Saias a damage bonus equal to the amount of red debuffs present on his target. In other words, if you set up under optimal conditions—which isn't difficult considering the tome also applies Atk/Res -5 to foes in a huge cross-shaped area—Saias gains huge one-shot hitting potential, capable of functioning in Aether Raids Offense, Defense, and general content.

Aside from the pretty workable positioning aspect, the debuffing part of Wargod's Tome also does well in applying mass penalties with arguably less restrictive conditions. This is favorable if other allies on your team have skills which rely on hitting weakened enemies (such as Thrasir and Bramimond).

One of the key advantages of using Saias over other Broadleaf Fan-style units is the fact that he is a tome user, meaning he hits Resistance instead of Defense. This is a relatively nice perk as many units in the game have lower Resistance than Defense, and only a few units that are stronger in Resistance can stand up to the might of a fully prepared Wargod's Tome hit.

Saias's mainly used stats are his 33 base Attack and 30 base Speed, both of which are hardly fantastic but allow him to maintain nice numbers in offensive play.

Copies of Saias are obtained through Heroic Grails, a free-to-play currency as opposed to Orbs. Additionally, you can offset the Grail cost by completing Saias's Grand Hero Battle and subsequent reruns.

By modern unit standards, Saias isn't exactly what you'd call exemplary. While his statline is sufficient for his job, its middling values throughout will occasionally come to overwhelm him in matchups against modern-day enemies—especially with dominant stats and skills.

The typical Broadleaf Fan user benefits from colorless coverage, meaning color disadvantage is nearly never a worry. In Saias's case, general matchup disadvantage against green units is something that he doesn't particularly appreciate from being blue.

And of course all of Saias's hard work goes to waste whenever he has the misfortune of running into enemies with penalty neutralizing or reversing skills. Those can be built into a number of weapons such as Chaos Ragnell or Whirling Grace, or the enemy equips skill such as Atk/Res Unity or Slick Fighter.