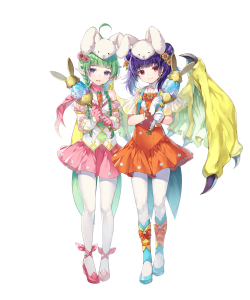 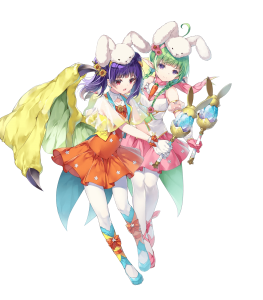 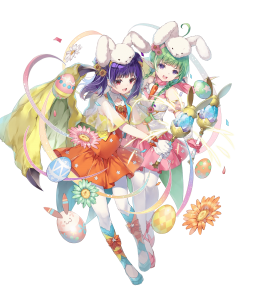 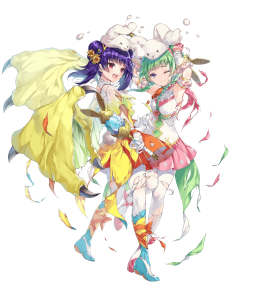 With a high 38 Attack, the Spring Harmony is ready to commit mass Myrrhder and harvest the treats of their enemies at the Spring Festival.

40 HP, 40 Defense, and 35 Resistance sum to a fantastic 79 physical bulk and great 74 magical bulk. Lilac-Jade Breath only adds to Myrrh and Nah’s bulk, making them extraordinarily difficult to OHKO or ORKO.

The Spring Harmony’s personal weapon is Lilac-Jade Breath, which is filled with effects to bolster their combat performance.

As a special Spring surprise, Myrrh and Nah can utilize a Harmonic Skill that has not 1, not 2, but 3 effects when activated:

Being Colorless is excellent for Myrrh and Nah, as they rarely face weapon triangle disadvantage; this makes their survivability more consistent, as they do not particularly struggle against any Color. Their competition is also humorously limited; the Spring Harmony utterly demolishes Legendary Grima, the only other Colorless Dragon Flier as of now.

As with all other Fliers, Myrrh and Nah have access to mobility-related skills such as Aerobatics, Flier Formation, Guidance, Flier Guidance, Ground Orders, and Air Orders to increase the movement of themselves and/or their allies. Being able to traverse terrain such as water, lava, forest, and mountain tiles without penalty can also allow for creative positioning that would otherwise be impossible.

While not necessarily an assessment of the Spring Harmony as a unit, their outstanding base kit is worth noting. Lilac-Jade Breath, Noontime, Distant Counter, Dragon’s Ire, and Atk/Res Rein are all fantastic skills for Myrrh and Nah, meaning they only need an Assist skill and a Sacred Seal to have a complete skill set. This makes them very convenient and budget-friendly, as they do not need any expensive fodder to perform remarkably well.

With only 25 Speed (30 with Lilac-Jade Breath active), Myrrh and Nah are susceptible to receiving enemy follow-up attacks. While their Harmonic Skill can alleviate this, it is only active for 1 turn, and Null Follow-Up can break through it entirely.

The 1-turn effects of follow-up prevention and neutralization of Flier-effective damage are locked behind the Spring Harmony’s Harmonic Skill. This can only be activated once per battle, meaning Myrrh and Nah will only perform at maximum efficiency for 1 turn. The Duo’s Hindrance structure in Aether Raids Defense can also spell disaster for the Spring Harmony; a well-guarded Duo’s Hindrance that is nearly unreachable without being stuck in enemy range may force them to either wait until Duo’s Hindrance is no longer active or not activate their Harmonic Skill at all.

With no avenue to neutralize Dragon-effective damage, Myrrh and Nah take 1.5x damage from common Aether Raids Defense weapons such as Naga, Divine Naga, Virtuous Naga, Ífingr, Cloud Maiougi, Dragonslasher, and Ninis’s Ice Lance. These weapons may stop the Spring fun and festivities earlier than expected, so caution should be taken if any of them are present.