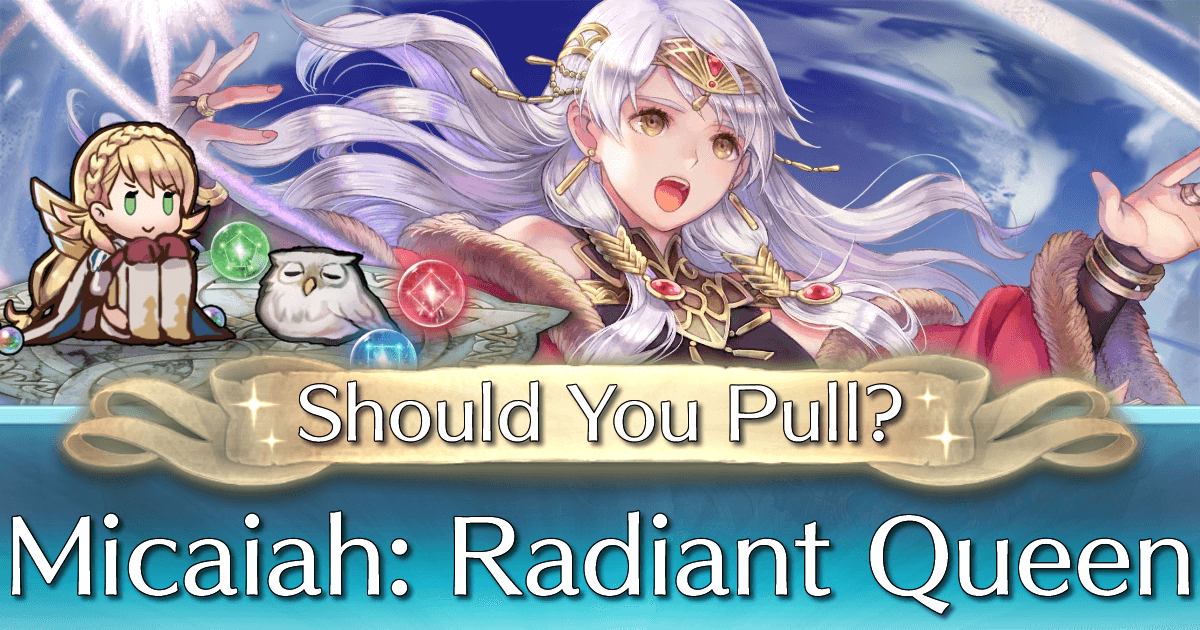 Fans have been anticipating Legendary Micaiah for years now, and she’s finally here. But are she and her banner worth spending your hard earned orbs on? Read on to find out.

First, let’s take a look at how Micaiah compares to the other wind legendaries available: Lyn, Lucina, Hrid, Gunnthra, Corrin, Eliwood, and Sigurd. With New Dawn, she hits Hrid, Gunnthra, Eliwood, and Sigurd for effective damage, which is likely to KO all of them in one hit except for possibly Sigurd due to the 40% damage reduction in Hallowed Tyrfing. She also may not be able to KO him with a follow-up attack if he’s using Crusader’s Ward, as it reduces damage from the second consecutive attack from a ranged foe by 80%. Micaiah’s Atk is high enough that she can often one-hit KO Lyn and Lucina as well, as their Res stats are quite poor and they have no source of damage reduction. Micaiah’s matchup against Corrin is perhaps her worst among Wind legendaries; with pre-charged Negating Fang Corrin can survive a hit from Micaiah in most circumstances, and then retaliate with a massively powerful attack that hits Micaiah’s terrible Def. While Prescience will reduce this damage by 30%, Corrin’s Atk is high enough that she will sometimes KO, depending on various factors like particular skills used.

When it comes to unit score potential, Micaiah is equal to Sigurd and above all the other wind legendaries, with a 185 BST duel skill and a unique B skill, Prescience, that boosts her maximum SP to score slightly higher than most units. Sigurd fulfills this same condition with Crusader’s Ward. She is a great choice in this regard if a player is willing to obtain enough copies of her; around 5 or 6 is where the extra score from using a Legendary Hero on an arena team with three units Blessed with that element starts to become noticeable. Of course, working towards +10 is ideal for scoring in the long run, but it is not necessary to start seeing benefits.

Micaiah arguably has some relevance in Aether Raids, but is not at the meta-defining strength of some other legendaries such as Sigurd and his ability to buff allies’ Mov. On an offense Raiding Party, she could be used as a strong player phase offense unit with New Dawn’s guaranteed follow-up when initiating combat, as well as pseudo-Desperation effect when she is below 50% HP. This combines well with Prescience reducing her damage taken from her foe’s first attack when initiating by 30%, potentially allowing her to get below 50% HP after being hit once and attack foes twice before they can retaliate thereafter. While she can KO many common threats this way, in the author’s opinion this type of team is not incredibly relevant in the current Aether Raids meta, especially considering that Micaiah can only gain the effect of Mythic Hero blessings (extra lift and stats) when it is Wind season, so roughly half of all seasons. She could be useful on offense, but she isn’t worth pulling for for that sole purpose.

Micaiah arguably has a stronger role on Aether Raids defense, where her armor and cavalry effectiveness along with guaranteed follow-up and damage reduction mean that she can serve as a strong offensive check to some tanks, particularly those who are armor-weak such as Fallen Edelgard. She unfortunately has the same seasonal restriction as on offense - she only receives Mythic effects from a Dark or Anima mythic when it is wind season - but in wind season she is a highly threatening unit on the right team.

Like many other strong player phase units, Micaiah can be extremely useful in various other modes when used on a team with several dancers, to clear difficult content such as Abyssal difficulty hero battles. Her combination of guaranteed follow-up, desperation, high Atk, two kinds of effective damage, and being colorless mean she is highly threatening to many different units.

While Micaiah is the face of this legendary banner, she is of course not the only unit available in focus on it, and since the player has no control which focus units they summon within a color between the three available, the overall value available on each color is important if the player wants one of those three units.

On red, we have Sothis, Fallen Male Morgan, and Legendary Lilina. Lilina is a great choice of Fire legendary if a player desires to spend high quantities of orbs to merge her up, as she combines extremely high damage potential with amazing movement for an arena scoring unit, and is also great on some teams in other modes like Aether Raids. She also comes with Atk/Res Solo 4, Sabotage Res, and Pulse Smoke if any of those are desired. Fallen Male Morgan has a strong and interesting tome effect that gives him good combat based on his buffs and his foe’s debuffs, and has a similar set of skills, with Atk/Res Solo 4, Sabotage Def, and Atk/Res Menace. Sothis is arguably the weakest Dark mythic at the time of writing, but Aether Raids defense mythics have high potential value if a player wants to reduce their lift loss, particularly when they are bonus units. She also has Atk/Spd Solo 3, Wrath, and Time’s Pulse.

Blue has an interesting set of units with Naga, Farina, and Ingrid. Naga is a marginally useful Astra mythic who can provide Def from a mythic blessing as well as confer dragon effectiveness with Divine Fang. A single copy of her may be useful to players who want to score well in Aether Raids for her bonus seasons, and of course merges may be useful to players who want to optimize their scoring and have committed to using Naga as a mythic. Her skill inheritance is relatively tame, with only AR-O Atk/Spd and Chill Spd worth mentioning at all, neither of which are very desirable. Farina is another in a long line of lance fliers and doesn’t have any extremely unique effects to make herself stand out, with most of her uniqueness coming from gaining extra stats when invested with Dragonflowers. She does have some useful inheritable skills in Atk/Spd Catch 4, Atk/Spd Snag, and Atk/Def Rein. Ingrid is a strong lance cavalier with a uniquely good weapon; Luin both denies foe’s counterattacks and deals non-resistable damage based on Ingrid’s Spd, along with some other useful effects. For inheritance, she has Atk/Spd Solo 4, Lull Spd/Def, and Rouse Atk/Spd.

The trio of units available on green is Legendary Edelgard, Thrasir, and Fallen Female Morgan. Legendary Edelgard is a solid choice of fire legendary if players want to merge her up, with the ability to act again after attacking via Raging Storm. Her inheritance is Atk/Res Solo 3 and Armored Stride. Thrasir is a decent but somewhat outclassed choice of Anima mythic, who threatens some common Aether Raids offense choices but fails to make much of an impact on others. Her Flashing Blade 4 and Panic Smoke also have some appeal. Fallen Female Morgan has an interesting weapon that works in a similar way as her male counterpart, giving her various positive effects based on her buffs and her foe’s debuffs. She also has useful skills in Atk/Def Solo 4, Dive-Bomb, and Atk/Def Menace.

Colorless is the obvious focus, with Micaiah, who in addition to her individual strengths as a unit has Fury 4 and the new Joint Distant Guard as inheritable options. Ashera is a useful Astra mythic that boosts Res, currently unique to her among Astra mythics, along with the ability to make herself and allies immune to Panic, which is highly useful to players who want to use high-stat tank teams in Astra season. She has Atk/Res Ideal 4 and Lull Spd/Res as well. Lastly, Fallen Edelgard is the third colorless unit available. She’s extremely strong in many contexts, with incredible survivability with high Def and Res, damage reduction and healing, as well as the ability to counterattack at range and act again after moving. She has many potential uses across many different modes. She also has Atk/Def Ideal 4 and Armored Stride if those skills are desired.

Colorless could easily be worthwhile to spend a small amount of orbs on and get a focus unit or two, or to spend large amounts of orbs on if a player desired a strong Wind legendary, a strong Astra mythic, and an overall amazing unit that scores great in arena. It is the strongest choice overall, and may be a good time to spend saved up orbs if you need any of these three units.

Red is a decent choice, especially if the player desires any of the selection of solid skills available to inherit, but there will be better options to merge Lilina and get other value along the way.

Blue could have value to players looking for a single Naga or Ingrid, as Farina is not a bad pick-up for inheritance; Atk/Spd Catch currently offers the highest non-mode specific buff to Atk and Spd, boosting them both by 9 if the foe is at 100% HP and debuffed in some way. This color is probably less appealing to players looking to merge Naga, unless they have a particular use in mind for several Ingrids or Farinas.

Green is likewise decent but not incredible. A single copy of any of the three units could be useful, but is generally not as valuable as the options on Colorless. Players looking to merge Edelgard may or may not have a use for several Thrasirs or Fallen Female Morgans; they do both have solid inheritance, but what players need will vary.

Overall, the selection is decent on every color, with some clear standouts. A single copy of Ashera or Fallen Edelgard may be highly useful for their unique effects, especially to Aether Raids players, and Micaiah is also a strong unit useful in many modes. In this author’s opinion, it could be worth spending orbs to get a copy or two of units on any color depending on what a player wants or needs, but it is probably not worth spending hundreds of saved up orbs on any color except Colorless; the color sharing on the other three choices is not with useful enough units - i.e. sharing across multiple elements of Legendary Heroes on the same color, or a strong Legendary sharing with a strong Light or Astra Mythic if the player desires score boosts in both Arena and Aether Raids.

Ultimately, individual players will need to decide what is and isn’t worth pulling for, as we all have different wants, needs, and priorities. Hopefully, this guide has helped you make that decision.