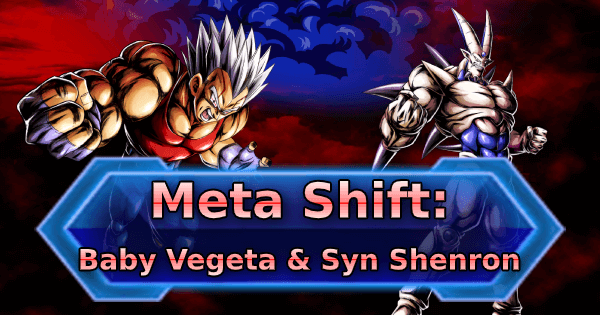 It’s been more than two months since the Christmas release of the GT Step Up Banner. Back then, the GT Team settled as the almost unquestionable top Team in the Meta, boasting immense offensive Power and quite respectable Durability. A couple of releases later, GT starts suffering from the lack of diversity it had, becoming too predictable and easy to counter color-wheel wise in general.

For these reasons, many people were waiting for the newest UST, which features SP Syn Shenron YEL and SP Baby Vegeta GRN, hoping they’d be powerful enough to stand out in a Team that already had really solid basis, despite the flaws. Let’s see how it went.

SP Syn Shenron YEL is an interesting Fighter, thanks to his mix of Damage Reduction and Endurance Effects that make him very durable, especially when coupled with SP Super Baby 2 BLU.  A Yellow Fighter was much needed for the Team, because there are a lot of strong Purple Fighters out there and GT had virtually no really Effective answer against them. Sadly, even SP Syn Shenron YEL won’t satisfy all the needs of this Team. Specifically, his Damage is too low early on, and in general he fails to be really useful at anything other than Tanking even after receiving a Rising Rush. He’s probably a respectable option against Regeneration and Android, --Matchups where SP Super Baby 2 BLU struggles, so he can be replaced by him -- but other than that there is nothing really worth mentioning about him.

SP Baby Vegeta GRN’s case is even worse. His Damage output isn’t as terrible as his stats would make you believe, and his Supportive Abilities are quite good, but his Main Ability is very bad considering its Effects can be avoided by switching out, and in general there are many Fighters having Debuff Protection. Also, being Green is not really ideal in this Meta. He’s better than SP Super #17 GRN, but the latter brings a much better Z-Ability to the Team so he’s not getting replaced most likely.

SP Baby Vegeta GRN arguably does better here than he does on GT, because Saiyans lacked a proper Supportive Fighter for a long time. All his possible Teammates would be Offensive heavyweights that could really benefit from his Ki Recovery and Damage Buff on switch. Also, some people might overlook his Bleed Damage Buffs since they might look insignificant at first, but those can magnify his Damage output quite impressively.

He’s not a Fighter you will bring to the field in every matchup, but if you have him at enough stars to Buff the all the Saiyans on the Team, you can put him on the bench and use him when you think it’s safe to bring a Green Fighter.

This UST Banner is very underwhelming. It focuses on a specific Tag, but even then it fails to improve it considerably. This doesn’t mean that pulling SP Syn Shenron YEL won’t make any difference for your GT Team, but it’s probably not wise to invest for these new Fighters as they’re just not that good compared to some recent releases.

The Fillers aren’t that good either, primarily featuring SP Buuhan GRN who has been in a lot of Banners already and SP Goku GRN who has fallen off.