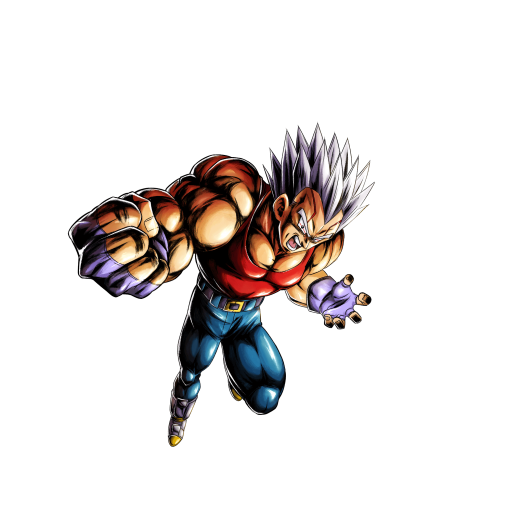 SP Baby Vegeta GRN is something of an unconventional Offensive Support Fighter with a plethora of ways to spread pain. His primary function is to Support his allies with a booster shot of Ki and Damage Inflicted Buffs, but he is no slouch in combat himself.

Baby's worth is derived from his ability to pressure foes with +1 Card Draw Speed-backed Combos that Baby's Allies can extend even further.

Capping off SP Baby Vegeta GRN's kit is a collection of hate-Buffs which increase his Damage against his host's family and reduces his Damage sustained from Vegeta's eternal rival.

This amalgam of Tuffle science and Saiyan biology might not be too threatening himself, but he becomes a true menace with a Team of capable allies.

Our Revenge is at Hand!

SP Baby Vegeta GRN gains power from Saiyan and GT allies when he enters combat, which manifests in +30% Damage Inflicted for 15 Timer Counts and +1 Card Draw Speed for 10 Timer Counts.

These Damage Buffs help Baby Vegeta hold his own in combat, but he's got another card up his sleeve that lets him spread even more chaos.

If he uses any Arts Card against a foe Afflicted by Bleed or Heavy Bleed, he enhances his Damage by 20% momentarily - for a mere 5 Timer Counts.

Considering Baby Vegeta brings a Strike and Blast Card that each inflict Bleed to his Team's deck, these stacking Buffs can lead to very high Combo Damage

True to his representation in the anime, SP Baby Vegeta GRN uses others to execute his plan. Any ally he switches into receives an instant supply of 30 Ki and a +30% Buff to their Inflicted Damage for 15 Timer Counts.

This Buff utility makes Baby an absolute menace if he lands a solid hit, as he can use that opening to bring an ally in on the action with a massive Damage Buff in tow.

SP Baby Vegeta GRN's Main Ability can be contextually powerful: the Debuffs it inflicts his target with are deadly, especially the +50% Damage Received Buff, but it's frankly too limited to be effective.

The Debuffs only effect Baby's current foe, so all the enemy needs to do is switch out to avoid them. It is valuable as a Damage-increasing Combo tool but not much else.

Exposed Without his Minions

With no GT or Saiyan allies to steal energy from, SP Baby Vegeta GRN has no personal Damage Buffs. Needless to say, with no way to increase his own Damage or reduce his Sustained Damage, Baby flounders as a Crisis Fighter.

Baby is almost always the better sacrifice in the face of an enemy Rising Rush if the option is between him and any other strong Fighter on his Tags.

No Home to Run Back to

SP Baby Vegeta GRN's in-combat synergies are second-to-none, but outside of combat, his offerings are very disappointing.

All he offers to his GT and Saiyan Allies at 6 Stars is a +28% Buff to Strike Attack, which is useful, but not as useful as the Defensive Z-Abilities offered by his Green competition on both Tags, SP Super #17 GRN and SP SSJ3 Goku GRN respectively.

His status as a Green Fighter in a meta rife with strong Purple opponents makes him a liability most of the time, falling in very few Cards to them because of his negligible Defenses. He is a very powerful Fighter, but the Meta is hostile to him.

The GT Tag welcomes SP Baby Vegeta GRN as a strong Supporter with excellent in-combat Synergy with its best Fighters.

Both SP Super Saiyan 4 Goku PUR and SP Super Saiyan 4 Vegeta RED restore 30 Ki and Buff their Damage when they enter the battlefield, which stacks with Baby's Support and results in a +60 Ki swing when Baby switches to either of them

SP Super Baby 2 BLU, the more evolved version of the character, enhances Baby's personal Damage with his own Buffs and can increase the amount of Health Baby Vegeta Heals with his Extra Arts Card.

SP Baby Vegeta GRN is a very interesting choice for this Tag, which has lacked a powerful Supporter. Baby significantly increases the Damage output of this Tag's strongest Fighters, most notably HE Shallot LGT, whose already earth-shattering Damage threatens to open up a super-massive black hole with Baby behind him.

Outside of Shallot, SP Angry Goku BLU enjoys Baby's Support and can act as a Defensive Pivot if Baby is threatened. Baby Vegeta complements the Support of the other prominent Blue Saiyan, SP Saiyan Saga Goku BLU - with the two of them forming a core that turns the third Team member into a monster.

he more conventionally Defensive SP Bardock YEL safeguards him from the Meta's Purple infestation, though an even better Purple-countering Fighter is SP Vegito YEL, who becomes an absolute demon with Baby's Support and is capable of shredding through those violet villains with a single Spirit Sword combo.

SP Super Vegito PUR needs no help in the Offense department, but Baby is an excellent enabler for him nonetheless.

The Super Saiyan 4s can function with Baby on this Tag too, but at that point a full GT Team might as well be constructed, as that Tag has better internal Support for Baby Vegeta.

While Baby doesn't Buff this Tag with his Z-Ability, he does work well on it, acting as an Offensive Supporter for his Allies. He needs SP Super Baby 2 BLU to be paired with him, as he requires a Saiyan or GT Ally fielded to activate his personal Damage Buffs.

If that prerequisite can be accomplished, Baby is able to dominate enemy Teams with his synergistic relationships. Baby significantly benefits from Zenkai 1 SP Majin Buu GRN's Zenkai Ability, which cranks all of his stats up to the next level.

This Equip is the ultimate option for Green Saiyans and Baby is no different in that regard.

The +25% Strike Damage Buff this equip gives turns the Tuffle into a Strike Damage powerhouse. The significant Buffs to Blast Defense and Ki Recovery are appreciated as well.

The Strike Damage Buff it bestows makes it almost a mirror image of Awakened You'll Pay!

The classic - the vintage - the true connoisseur's choice for any Saiyan continues to be This Should Be Fun!

This Equip combines a fantastic Health Buff with a strong Blast Damage Buff and increased Damage to the root of all evil.

He’s a solid Support Fighter that gives his Teammates Damage Inflicted and an instant 30 Ki when switched out. He does have some competition on his primary Team with SP SSJ4 Goku GRN