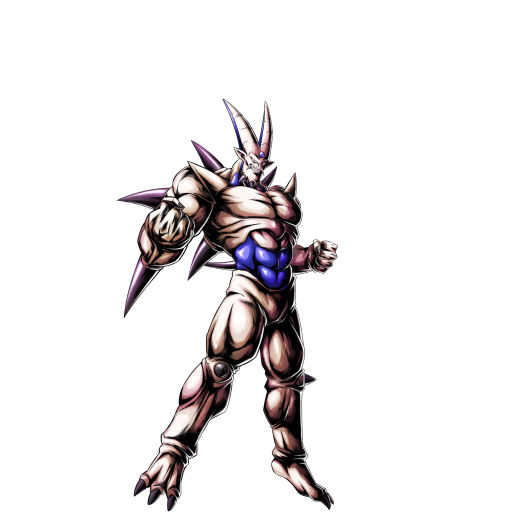 The evil desires poured into the Dragon Balls have given rise to SP Syn Shenron YEL, a stellar Defensive Fighter with a simple yet versatile toolkit that will secure him a spot on the best GT Tag Teams.

At the start of the match, Syn acts as a Defensive Pivot whose Sustained Damage Cut Buff's activation condition lets it trigger even if he doesn't enter the battlefield on Cover-change. His Extra Arts Card and Main Ability give him some value in neutral exchanges too.

What sets SP Syn Shenron YEL apart is the way he interacts with the Rising Rush mechanic. Syn not only packs an endurance effect which lets him sustain a fatal blow and heal a percentage of his Health back, he also gives himself massive one-time permanent Damage Buffs when an Ally or an Enemy uses a Rising Rush.

Syn Shenron's power is easy to dismiss as gimmicky or limited, but in practice, he is a reliable Defensive Fighter who shines on the battlefield, even moreso if he is properly Supported.

The +50% Sustained Damage Cut Buff Syn gives himself whenever he graces the field lets him stymie enemy momentum in classic Defensive Fighter fashion. What is a bit atypical about this Buff is that it triggers no matter what when he enters the field, protecting him from Cover change-baiting tactics.

If Syn is defeated he revives himself from 0 Health, restoring 25% of it in the process. This nifty endurance effect even comes packaged with 30 Timer Counts of unfavorable Element Factor negation, so even if he is felled during a Red Fighter's Combo, they likely won't be able to keep him down.

Syn Shenron feeds on the negative desires of friends and foes alike, which manifests itself as permanent, non-cancelable Buffs - +50% to Damage Inflicted and +100% to Ki Recovery - when the Rising Rush is used the first time in a match.

This utility of his makes him one of the best Rising Rush Tanks in the game, and if his Team is lucky enough to activate its Rising Rush first, Syn can keep the pressure on with strong Offensive presence.

The nature of these Buffs lets Syn perform well as a Crisis Fighter, as when they're active alongside his neutral tools, endurance, and naturally high Defensive Stats, mounting comebacks with the Leader of the Shadow Dragons becomes very manageable.

SP Syn Shenron YEL has an arsenal of back-handed tools that he can use to bulldoze through his foes. His Extra Arts Card, the Dark Dragon-Slaying Bullet, is a ranged attack that draws an additional card immediately, Restores 30 Ki on hit, and Combos into any other Arts Card.

If Syn's permanent Buffs are online when this card is used, he's free to decimate his target, but if not, the opening this card provides makes it easy for him to safely swap to a more Offensively-oriented Teammate

His Special Move Arts Card is also a ranged projectile, only this one is able to Damage to all enemy Fighters on standby and has a 50% chance to destroy a Dragon Ball, which makes it ideal for Crisis Situations.

No Sinners Yet to Punish

Before the Rising Rush is activated, SP Syn Shenron YEL's personal Damage is very poor. His potential as an Offensive Pivot is laughable at best, as most of the strongest Purple Fighters in the meta are bulky enough that Syn's output against them is worse than the more Offensive members of his Team.

If Syn has his Rising Rush Buffs, or if he is under the influence of the GT Tag's top class Support Fighter roster, the situation would be very different, however.

SP Syn Shenron YEL's unconventional collection of Tags leaves him high and dry in the equipment department. His best options for many players will be generic equips for all Yellow Fighters that do not match his playstyle.

This deficiency is expected to be addressed in the future, but his low-equipment quality is a concern in the present.

The GT Tag is SP Syn Shenron YEL's only Tag, but what he lacks in Tag versatility he makes up for in combat synergy.

Syn Shenron's best confidant is without a doubt, SP Super Baby 2 BLU. Baby protects Syn from enemy Reds, ameliorates his Damage issues, and increases his Endurance's healing factor significantly with to his Health Restoration Potency Buff. EX Syn Shenron BLU can fill this role as well, though he's not nearly as strong as Baby.

The Fighter he directly enables the most is SP Omega Shenron RED, whose status spreading is significantly enhanced by the presence of a Shadow Dragon, like his un-evolved self.

SP Super Saiyan 4 Goku PUR, the Tag's most reliable tank prior to Syn's arrival, unexpectedly works well with him. Syn and Goku can complement each other Defensively by cutting off enemy momentum in quick succession if either of them lose a neutral exchange.

An arguably better Tank who does an excellent job complementing Syn's strengths is SP FP SSJ4 Goku GRN, the strongest Ranged Fighter on this Tag. This Goku variant needs a Saiyan fighting with him to fully activate his passives, so it's best to run Syn and Goku alongside either Baby or another Goku.

Awakened I'm an Elite No. １

This Equip seems Tailor-made for SP Syn Shenron YEL, and it very well might have been, as they released at the same time. This Equip's massive Buff to Strike Attack and Ki Recovery prime Syn for utter rampage once his Damage Buffs kick in.

Because Syn is likely to be used alongside the Super Saiyan 4s, this GT-specific Equip is able to significantly shore up his Defenses and offer a pure Buff to his Strike Attack if such a thing is decided. While the fact that this Equip necessitates a Super Saiyan 4's usage alongside him can be seen as limiting, they form the backbone of GT, so the team-restriction required to get the most out of this equip isn't even noticeable.

This Equip is in the same boat as the one above - Syn ought to use these if he has Super Saiyan 4 allies. If not, Leave the Rest to me! or Wait, Gohan! can be used instead.

He’s a solid starter on GT. He provides them a Defensive pivot as well as a way to deal with troublesome Purple Fighters all over the meta, like SP Fusion Zamasu PUR. The release of SP Omega Shenron RED was a huge help for him as well.