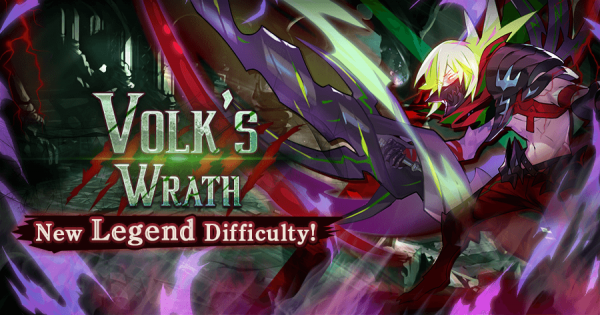 As the first ever Agito, it’s only fair that Volk is the first to appear under Legend difficulty. Unlike Master difficulty, Volk begins in human form but gains frighteningly powerful tools during Phase 2. With Plague more relevant than ever, players must also fear Volk’s Berserk mode which promises to swiftly end the runs of casual players.

Solo and Co-op are not identical, and this guide provides various tips for managing AI-controlled teammates in Solo mode. With proper control, players will achieve their first clears and access to the coveted blazing weapon skins.

NOTE: This guide revolves around Gala Mym's high damage output and aims to minimize the time spent fighting Volk in Berserk mode. She is by no means a hard requirement but remains the strongest power pick for fast, consistent runs.

All Dragons and Wyrmprints are considered fully unbound unless otherwise noted.

All weapons are assumed to be Tier 2 Agitos MINIMUM (refined once).

These defined roles are highly recommended to ensure a smooth Legend run. Note that some adventurers can fill more than one role, in which case feel free to choose your next strongest DPS unit

4x Dragon’s Boon grants a whopping +30% bonus to Dragon Damage. Consecutive Shapeshifts with this loadout also provide the scaling needed to power through Berserk Mode and close out the fight strong. Combined with her independence from Burn, Mym is by far the premier power pick for this fight.

Those without Gala Mym can simply use their strongest adventurer. Prioritize adventurers with longer range or extensive iframes.

If running a Blade adventurer, try to take manual control whenever possible. AI-controlled Blades tend not to last long under pressure.

Legend Volk will be in Overdrive for the majority of the fight. You will control this adventurer whenever Shapeshift is unavailable, aiming to break Volk as quickly and as often as possible.

Leonidas is king at shredding Overdrive gauges while also leaning on his Chain Co-ability for more frequent Shapeshifts.

Although AI teammates take reduced damage, they are far from foolproof. Dispelling Volk’s numerous STR buffs will greatly soften the impact from stray hits. Note that Euden only offers Dispel while Shapeshifted and a different Dispeller is recommended if running Gala Mym.

Most healers can reliably remove Plague, but Halloween Lowen’s scaling HP buffs are excellent for keeping AI teammates alive. Additionally, H!Lowen can achieve both Sleep and Stun immunity through Affinities while the rest of the healing roster remains susceptible to Sleep. 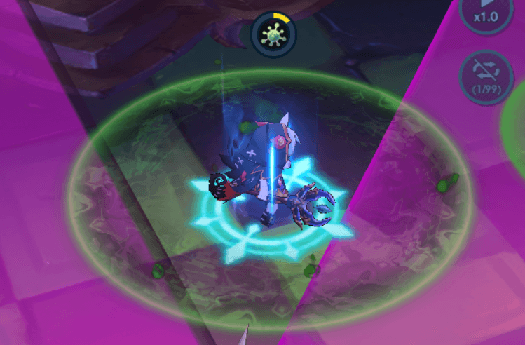 This debuff is Volk’s primary mechanic and will remove all status resistances from afflicted players. Plague will slowly wear off over time, but receiving healing will also reduce its duration. Upon wearing off, Plague will spread to any nearby players.

Volk himself can become Plagued, rendering him vulnerable to status effects and preventing him from healing via Steal Vitality. Managing Plague is a key factor behind Legend as the Poison usually leads to death while avoiding all Plague allows the Blood Moon to fill.

The opening phase is largely similar to Expert Volk's Wrath:

Roll away from Volk’s initial spin attack, then heal to remove Plague from your team.

Use a melee/Stun-immune unit (EX. Mym) to detonate the Red bombs. This also prevents them from hugging Volk and eating multiple Ravenous Claws.

Switch to a Sleep-immune unit (EX. H!Lowen) and clear the Green bombs.

In general, avoid getting locked into skill animations before the Ravenous Claws start flying.

Heal off the Plague stacks following Pestilent Wind; make sure each teammate is sufficiently spaced before doing so or Plague will simply keep spreading.

Run along the perimeter of the map to avoid the four teleport strikes.

Position Lowen along the upper perimeter with the other three south of Volk.

Once available, switch to Gala Mym and Shapeshift to close out Phase 1.

With or without Mym, aim to finish Phase 1 as the first Resentment ends, before Volk spawns a new set of Red/Green bombs. 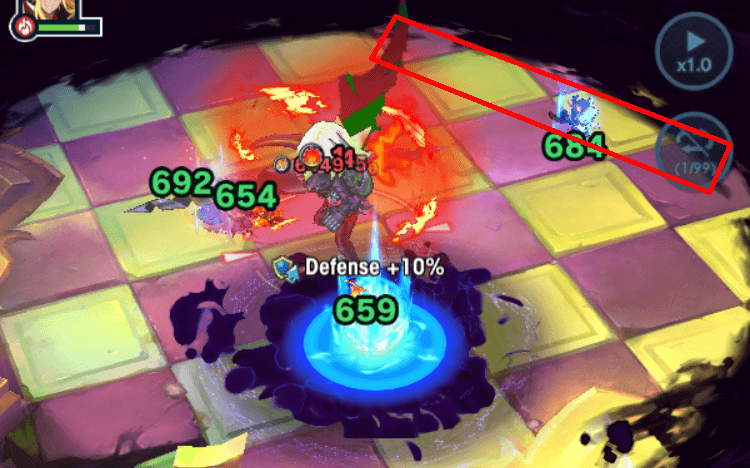 Volk will target the furthest adventurer with a fan of Purple linear attacks. This position gives Lowen room to dodge.

Like Master Volk says, this phase is no game. Follow these general guidelines to optimize damage before Berserk mode:

Volk summons a Blood Moon high in the sky. Unlike its previous versions, the Legend Blood Moon is not targetable and will periodically drain HP from all players. Once it’s drained enough, the Moon will crash down and wipe the entire team. The Blood Moon can become Plagued if it attempts to drain from Plagued players, greatly delaying the wipe mechanic.

Interestingly, Solo Legend Volk’s Blood Moon fills much more slowly than in Co-op and can largely be ignored. Thus, intentionally acquiring Plague is not necessary when running Solo. 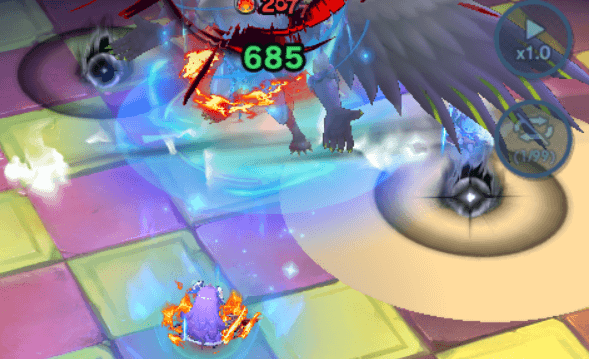 Volk summons two Black bombs. Similar to the typical Red/Green bombs, these new variants will apply Plague to anyone within its radius. A crucial difference from non-Legend Volk is that stepping on any bomb while Shapeshifted will immediately return the player to human form.

Shapeshift, then eat one of the bombs when Dragon form is about to end. Use any non-Plagued adventurer to clear the other.

Be wary of detonating a bomb while a nearby teammate is Plagued.

Volk’s swipes are now Purple markers, so prioritize safety and avoid using skills until after Volk has just swiped.

Volk will charge then unleash an unavoidable map-wide pulse, dealing moderate damage and immobilizing any adventurer that still has Plague.

Following this attack, switch to your healer and position them away from your DPS.

Once your healer is marked with the tornado, swap back to your Overdrive breaker and continue spamming Force Strikes. When not controlled, your healer will take drastically reduced damage and should rarely die to the Squall.

When his HP reaches around 33%, Volk becomes frenzied, neutralizing his Blood Moon to gain a lethal power boost. Each swipe, while avoidable, will prove fatal or near-fatal even to AI-controlled teammates. Additionally, Volk's damage taken will be heavily reduced.

For the remainder of the fight, indicators for all red/purple marker attacks will not be visible, so players will have to pay close attention to Volk whenever he winds up for a swipe.

Volk also becomes immune to all status effects in this mode, greatly neutering loadouts based on Burn, Frostbite, etc.

For the remainder of the fight, follow three rules: 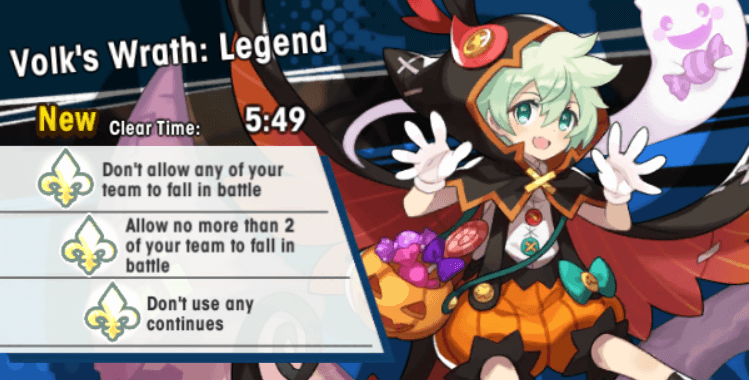 First clears will offer enough materials to both refine and fully unbind a Lv. 80 Agito weapon, blazing skin and all. 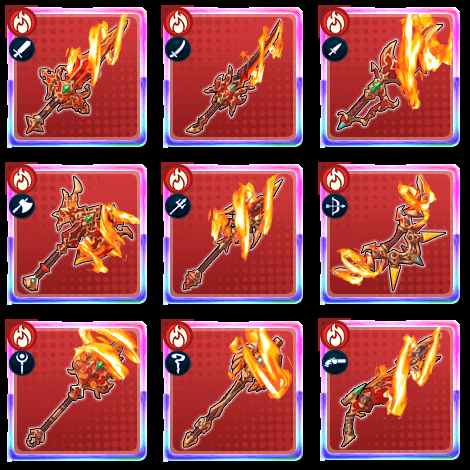