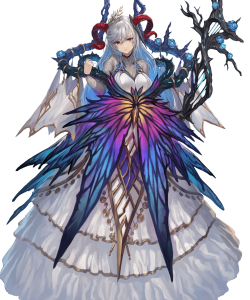 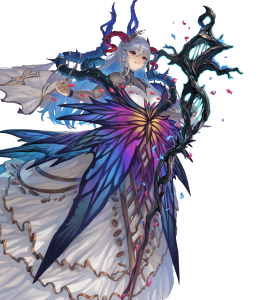 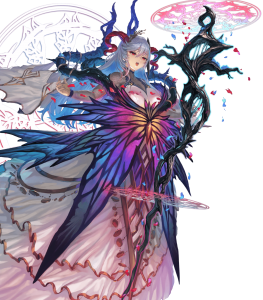 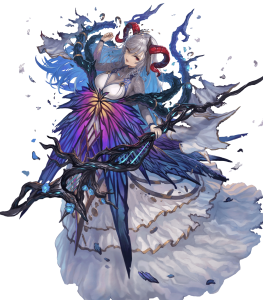 Requiem for a Dream (Galeforce)

Freyja’s exclusive Nightmare Horn combines Distant Counter and Speed-based damage reduction—effects that are already quite strong and coveted individually—into a single weapon. This alone places the fairy queen in an incredibly good position in the current meta; boasting immense flexibility and a great deal of deceptive bulkiness, Nightmare Horn allows Freyja’s combat performance to shine as one of the best in her class.

As if Nightmare Horn wasn’t enough, Freyja comes with another PRF skill in the form of a B slot: Binding Necklace. Operating as an improved variation of a Lull skill, Binding Necklace comes with a unique “buff steal” mechanic: for every visible stat boost an opponent has, Freyja will benefit from an in-combat boost equal to that amount while that foe will be afflicted by an in-combat debuff equal to that amount, thus having their boosts effectively stolen.

This itself is quite powerful and allows for a potentially massive stat-swing in Freyja’s favor but even against foes who aren’t buffed, Binding Necklace still grants her a +4 stat advantage at base as long as it’s active.

True to her name, the Lady of Nightmare raises the bar for the current high Speed h̶e̶l̶l̶ meta with her own staggering base Speed of 44—increased further to 47 with Nightmare Horn’s passive boost and yet again by Binding Necklace to upwards of 51. This provides an exemplary foundation with which to exploit her weapon’s damage reduction, as well as lets her avoid and perform doubles with ease. Freyja’s Attack isn’t too far behind either; at a base value of 38, her damage output is fairly consistent.

Freyja’s status as a Light Mythical Hero comes with a few other advantages as well.

Being a cavalry beast comes with several strengths: innate access to two separate sets of class-exclusive buffs, expansive range, and the ability to transform. Upon transformation, Freyja benefits from +2 Attack but more importantly a mini Sturdy Impact effect, offering her strong mixed-phase utility given the primarily defensive nature of her weapon.

Although Freyja’s combat prowess is certainly nothing less than impressive, this unfortunately comes at the cost of her ability to support her allies being pretty much nonexistent. In contrast, the other Light Mythical Heroes pack a ton of utility—Eir has her Resistance boost and a unique place in Galeforce teams, Peony is one of the best dancers in the game, Mila’s Turnwheel makes AR-Offense a cakewalk—and puts the queen at a striking disadvantage from such a standpoint.

Combined with the fact that she can’t be blessed to benefit from stat boosts and her scarce availability, if one has already heavily invested into other units who can be blessed, Freyja’s value as a combat unit quickly falls off—and with no real way of supporting her allies either, it can be difficult to justify slotting Freyja into an Aether Raids Offense team at all under such circumstances. If she had been a defensive Mythical Hero instead, though, it would be a much different story given how well her skills lend themselves to such a setting.

Although a strength, Freyja’s cavalry status comes with a few attached detriments as well. On top of an overbearing weakness to cavalry-effective damage (it should be noted that beast-effective damage does exist but it’s very rare), Freyja’s mobility is impeded greatly by certain terrain like forests when present. Furthermore, she is locked out of using a few skills that would have otherwise been greatly useful to her—most notably Flashing Blade and Null Follow-Up—but the fact that her own skills are so strong already lessens the impact of this.