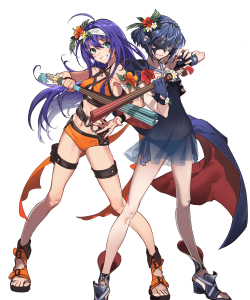 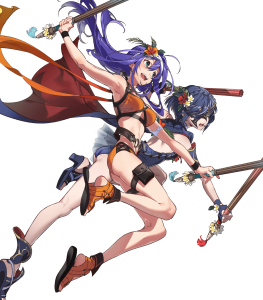 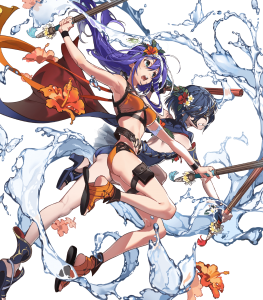 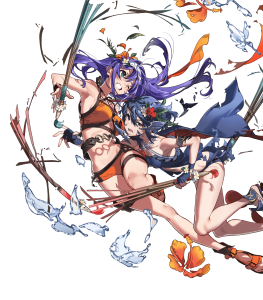 The key differentiating factor separating Mia and Marth from the previous dagger-wielding equestrian beach beauties (say that five times in a row), Summer Strikers offers quite a lot in one package. The -1 Special cooldown is already quite useful for fast Special activations, and that is only the icing on top of the weapon's primary initiation benefits: +5 Atk/Spd and, most shiny of all, 75% damage reduction on the enemy's first hit. As a result, Mia/Marth's player phase is extremely strong from the get-go.

Starting at 41 base Speed, Mia/Marth is one of the fastest ranged units in the game, and their 35 Attack is relatively high for dagger units. Although Summer Strikes does offer a beefy amount of additional Atk/Spd on top of this, the duo's offensive statline ensures a solid performance no matter what build they might end up with.

Mia/Marth's cavalry status is also another main point of distinction. It gives them ultimate ranged control of most maps (save for terrain blocks) while giving them access to the prized Lull skill line.

Mia/Marth is the first of a series of special units known as Harmonic heroes. Fortunately, they start the party off with quite a decent Harmonized Skill: Resonant Blades, which grants +4 Atk/Spd in combat to themselves and all units from their titles (Awakening and Radiant Dawn). In addition to being very useful for fellow offensive units, the skill also refreshes every third turn, which adds a degree of activation flexibility compared to regular Duo Hero effects (typically used once).

Coming with 38 HP / 17 Def / 25 Res in the game's fourth year—a period where even offensive ranged units like Eleonora have decent bulk—is indeed sketchy. Though Summer Strikers does well in improving Mia/Marth's actual survivability, its benefits are limited only in their player phase and above a certain HP threshold. As a result, their enemy phase performance with said weapon is rather scarce; even other builds running other weapons and enemy phase-based tools face the threat of being knocked out by washed out by strong hits.