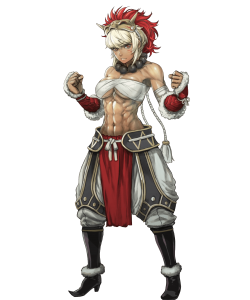 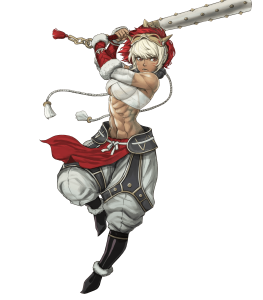 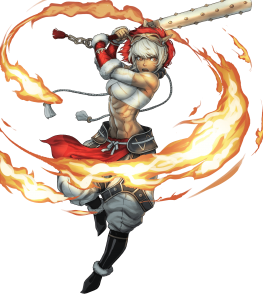 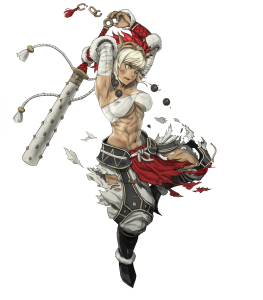 Rinkah’s physical bulk is amazing, sporting a base value of 41 Defense that can be pushed even further with the help of a Defense Super Asset. Likewise, her Speed also finds itself at a high value of 39, also sporting a Super Asset that can make her even faster. No matter which of these two stats are invested heavily into, summoners will not be disappointed with these extremes.

Rinkah’s Club is a powerful unique weapon that lowers her cooldown by -1, and will grant Rinkah with Attack/Defense +5 alongside Special cooldown charge +1 per her foe’s attack during combat. There are two checks for these effects and only one of the two has to be achieved, either for her foe to initiate combat, or for Rinkah to not be at full HP.

As a result of her high Speed and powerful unique weapon, Rinkah can find herself diverging into all kinds of builds. While her base kit certainly suggests for her to be a physical tank unit, it is entirely possible to build her as a more Player Phase oriented unit thanks to her high Speed and the fact that Rinkah’s Club can be used in the Player Phase if she is not at full HP.

Rinkah’s Resistance stat is a mediocre value of 18 as a compensation for her extremely high physical Defense. Rinkah must be wary to avoid taking magical damage unless she is running Skills that reduce damage such as Close Call or Repel. Dropping Rinkah’s Resistance is recommended for all her builds as it is her least valuable stat, but it doesn’t help that she also has a Resistance Super Flaw to deal with.

Attack could be Higher Prior to Setup

While Rinkah certainly gets a bonus to her Attack with the help of Rinkah’s Club, her base 34 Attack is a little more average than it’d like to be before the weapon effect kicks in. Making the most of her weapon, whether it be devoting to Enemy Phase or making sure she drops away from full HP to justify Player Phase is key to making Rinkah hit much harder than her Attack stat suggests.

Imagine going into arena with a high bst team. Now, naturally, physical units tend to have higher bst, so your team will most likely be all physical. You choose the high bst enemy, and low and behold. You’ve lost already. Turns out the enemy had Rinkah. Or as I prefer to call her, xX_Megadeathgod420_Xx.
Rinkah is a beast, and there are no two ways about it, her physical defence is so stupidly high in spite of wearing about us much as I do when I play this game (not much), and her speed is surprisingly high to boot. This kit allows her to reach about 47 defence, ensuring anyone without magic won’t scratch her with some support. Rinkah’s claim to fame (at least I’m predicting, Rinkah hasn’t really entered the metagame yet) is that she can solo pretty much any map without mages. But most maps have mages, so she isn’t book 4’s surtr. Not quite. But with this quick but not so easy kit, she can hold her own against mages much more effectively.
Distant Foil is perfect, for a pure physical tank, but this build aims to be a bit more versatile as Rinkah will be constantly healing herself with Aether, so she can just use Distant Counter, as mages will be one shot by her, and have their hp drained.
Special spiral allows her to immediately proc Aether every round of combat on enemy phase, as long as the opponent doesn't carry Guard.
Pulse Smoke is a must have for enemy phase tanks, but Atk Smoke is also a great alternative.
Swift stance gives her res a much needed boost, and allows a lot more doubles against faster units.
Rinkah is the very epitome of a physical tank. She doesn’t usually take damage from physicals, and mages will be one shot by her rapid aether activation, and can stay alive after combat with them thanks to the healing.
And of course, she’s a tanned muscular waifu, which I love, because I too am tanned and muscular. (Not a waifu unfortunately)
Thank you for reading my build, I put a lot of effort into these, and I have a few more builds for units Gamepress doesn’t do justice in my opinion.