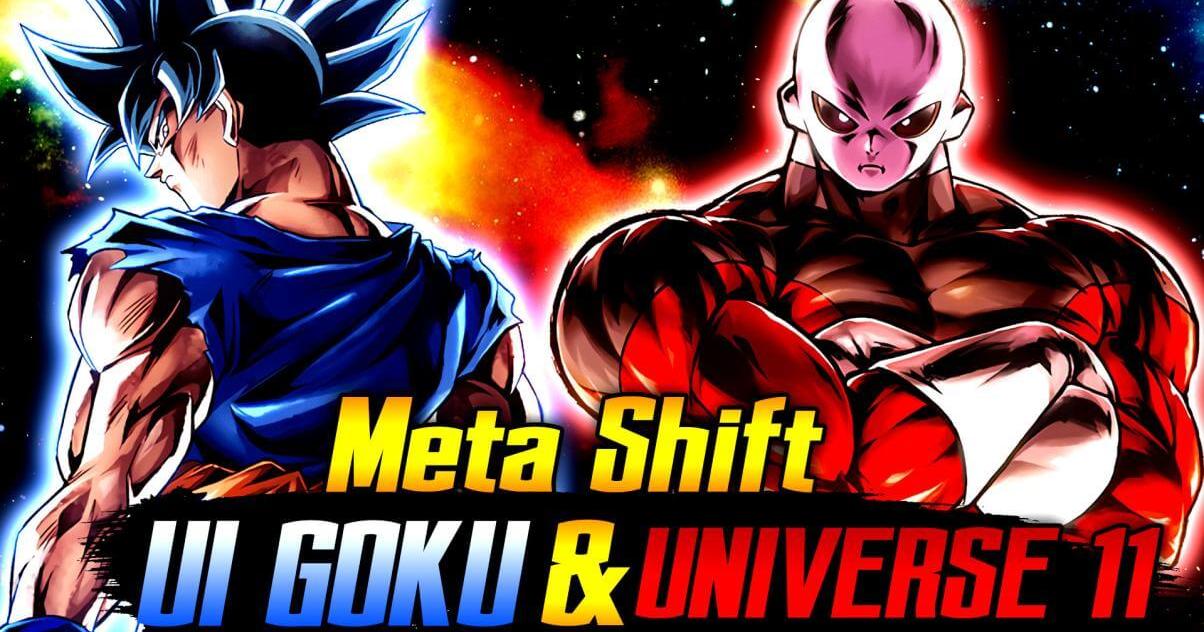 It’s Black Friday time! Well, not quite since we’re already past that, but it’s time to evaluate the new Fighters nonetheless. UI Goku, Jiren, Toppo, and Dyspo all got released in a Step Up after getting teased in the “Reveals and Stuff” a day earlier, to the surprise of no one as Apple already mistakenly leaked the news beforehand through an ad.

The Tournament of Power Arc in general has been the focal point of the past few months in Dragon Ball Legends, which mainly helped Teams like Rival Universe and God Ki, so let’s see if the most recent Fighters push those Tags even higher.

SP UI Goku PUR is the Fighter that completes God Ki after SP SSB Goku BLU’s Zenkai Awakening a week ago. The Saiyan that achieved what even GoDs couldn’t is a breath of fresh air for the Team and the game in general, because his Abilities are very unique - although this doesn’t mean overpowered -.

Looking at his kit, he looks like an Offensive Fighter with abysmal durability, but his unique Dodge and his Cover Effects make him a very impactful Fighter regardless of his weaknesses. Specifically, his Dodge can be used to stall, which is helpful to refill the Vanish Gauge and/or keep the opponent busy while you wait for substitution counts. Of course, it’s not just limited to those uses, there are many different ways you can take advantage of the Dodge depending on the situation, which makes it a high Skill ceiling mechanic-

That said, his fragility is a big limit that puts him behind more straightforward Fighters such as SP SSJ2 Gohan RED, but in any case, he still helps God Ki as he fits very well with his Teammates. At the moment, Vados-UI-SSB Goku Z7 looks like a very promising trio thanks to its dynamic offense and considering SP Beerus GRN’s Zenkai Summon finally got an overhaul, this Tag will be a relevant PvP threat moving forward.

Universe 11 has joined the fray, enlarging the variety of Fighters Rival Universe has at its disposal. As a result, Bergamo, Basil, and Vados are getting replaced. It’s not a big deal for the first two since they’ve never been particularly impressive, but Vados not having the same color as Jiren would’ve done wonders for sure.

Specifically, the fearless Warriors of Justice come with a pretty standard set up: Toppo is the Tank, Dyspo is a glass cannon, and Jiren is pretty balanced thanks to a lot of interesting gimmicks. Even by themselves, the new three Fighters can make a viable lineup, but in the Rival Universe context, they find a very interesting ally in Champa, which makes the Team quite versatile.

Truth be told, Toppo and Jiren are the highlights, as the two of them combine obnoxious Defensive Mechanics with explosive Offensive Bursts, so they’ll carry the Team more often than not. Jiren, in particular, is a relentless juggernaut when he Comboes, as his immunity to Special Cover Effects makes all of his Moves very consistent.

All in all, Rival Universe is a Tag with great Ability Bonus, versatile color wheel, and respectable firepower, so it’s going to be competitive in PvP for the next few months, but it still feels like it’s missing something compared to Top Tier Teams.

Jiren is a much-needed addition for Powerful Opponent, mainly thanks to his Double Stat Z-Ability. In the past, the developers’ attempts at strengthening this Team have been rather timid, as strong Fighters like SP Perfect Cell (Revive) RED and SP Merged Zamasu PUR offer very little in terms of Ability Bonus to the Team, but Jiren is a step in the right direction.

However, he shares the same color as SP Metal Cooler GRN on Powerful Opponent and even if he’s directly better, it’s still not ideal for a Team that still lacks a clear identity. As a result, Cell-Jiren-Zamasu is this Team’s only possible lineup, which isn’t bad considering those Fighters’ capabilities, but there are some issues. The most troublesome thing is the Deck, 7-5 in favor of Blast Cards which doesn’t benefit a character that largely relies on Strike Cards to get going like SP Jiren GRN.

As a whole Powerful Opponent has high Offensive ceiling and Cell’s Resurrection mechanic gives it some survivability even at high-level PvP, so it’s only missing a few pieces to become a menacing threat.

UI Goku is a possible addition for both Teams, but he has to compete with SP SSJ3 Goku PUR, who is a Meta defining Fighter. While the new Goku offers more in terms of unpredictability and survivability thanks to his Covers and Dodge mechanic, SSJ3 Goku is straight up a much better Fighter both Offensively and Defensively, so he should be the primary choice in most cases.

There are instances where they can be used together in a Purple Color-counter structure, mainly on Son Family thanks to SP SSJ2 Gohan RED’s presence as an off-color Fighter. The Team flows really well Offensively, and UI Goku’s Cover is useful to shield the Team’s aces when needed.

This Banner shakes things up a bit in the Meta. Four new Sparking Characters in a single Step Up hasn’t happened since the God Goku-Beerus Step Up, so it’s a nice change of pace.

However, it’s worth noting that the LF of this Banner and the other new Fighters don’t synergize together very well, as Universe Survival still looks like an unfinished product - the Universe 11 warriors not Boosting it through Z-Ability was an awful surprise -. Here is how it goes: You should only pull on this Banner if, among all things, you want to make your Rival Universe Team better. Pulling on this Banner just for its God Ki value isn’t suggested, as UI Goku isn’t that much of a game-changer to justify his low pull rate.

Fillers could be worse, but none of those Fighters are particularly impactful for God Ki or Rival Universe.