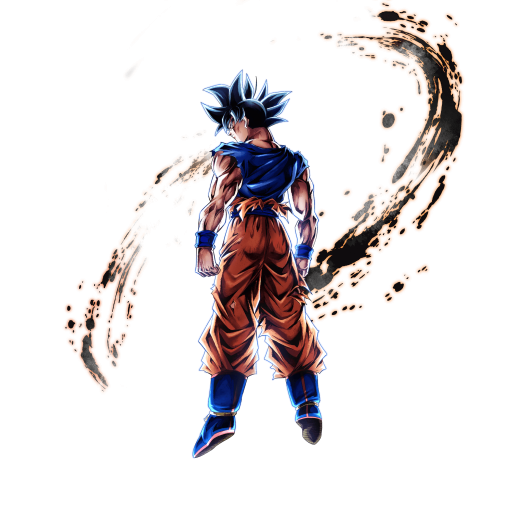 Ahem...You get the idea. The long awaited arrival of SP Ultra Instinct -sign- Goku PUR, or just UI -sign- for short, has sent ripples through the community and the Meta. UI -sign-'s incredible combo potential, cover utility, Ultimate Arts Card, and excellent neutral pressure are all laudable aspects of his toolkit, but everything is superseded by his Unique Mechanic, the Ultra Instinct Gauge.

During neutral gamestates where no action is taking place, Ultra Instinct Goku can avoid all standard attacks - tap shots, ki blasts, strike cards, and tap punches - without expending his Vanishing Gauge. Instead, he consumes a portion of this unique resource that continuously drains while he's on the battlefield, recharges while he's on standby, and resets the gamestate to neutral when activated.

With this gauge, his deadly Special Arts card, and constant double-trouble cover-change pressure, he's an unceasing threat wherever he is on the field, and he essentially must be played around at all times. His Teams, God Ki, Son Family, Saiyan, and Universe Survival Saga, aren't lacking in the slightest either, and he synergizes very well with all of those tags' premier Supporters.

Fortunately for Goku's foes, he's a fairly frail Fighter stat-wise. His Health and Defenses leave a lot to be desired in a meta with so many offensive juggernauts. That being said, no matter how easy it is to fell him in one combo, he has to be hit first, and that's much easier said than done.

The Cusp of Perfection

Because of the Ultra Instinct gauge, -sign- doesn't need to worry about a lot of minor neutral game annoyances that other characters do. At close range he's entirely invincible while the gauge is active, as he can interrupt the attacks he cannot automatically dodge very easily.

It's brutal at midrange. Enemy Fighters need to either approach themselves or wait out the gauge's timer, because nothing they do can catch him off-guard that he can't automatically dodge. Simply floating forwards and backwards with -sign- puts up a near impenetrable defensive wall.

Seeing as foes are incentivized to approach with tap attacks or fire tap shots to deplete it, Ultra Instinct Goku has a very easy time gaining priority in combat, typically with a well-timed blast arts. This gauge defines the way he functions and any player seeking to master UI Goku must understand its strengths and weaknesses thoroughly.

After it activates, Goku is not at a frame advantage, so it's very possible for a foe to perfect vanish an attack he throws out if he's too hasty with his punish. The gauge cannot protect him during recovery animations. Simply put, this is an aspect of his kit that makes him better than other fighters mechanically. He has the best neutral coverage in the game.

SP Ultra Instinct -sign- Goku PUR is far from all-flash, no substance. His Combo game rivals the best of the best thanks to his unique abilities, which give him periodic injections of Ki and Inflicted Damage Buffs the longer he spends on the field, 3 and 8 Timer Counts for 30 Ki and 20/30% Damage Inflicted respectively.

Not only are these requirements child's play for a fighter with the Instinct Gauge, these effects' mercurial activations allow him to seamlessly extend combos after switching in on the offensive.

Speaking of offenses, his base stats are nothing to scoff at, especially when they're augmented by a constant 60% Inflicted Damage Buff, a 50% Ki Recovery Buff, and a permanent 5 Ki Cost Discount for Strike and Blast Arts.

Universe 7's Ace in the Hole

Goku's explosive Damage potential is owed to his specialty arts cards, those being his Special Move, Special Arts, and Ultimate Arts. His Special Move's Massive Damage Multiplier and Added Damage Bonus on activation are great by themselves, but the fact that it recovers 50% of his Instinct Gauge is what really puts it over the top as a combo finisher.

His Special Arts is arguably the most powerful one in the entire game, sporting 10% Health Recovery, 40 Ki Recovery, a 20% Damage Inflicted Buff, and +1 Card Draw Speed on hit. The move is hardly difficult to make contact with either - it's a unique radius attack that hits all foes in close or mid-range, and its fast start-up speed makes it very difficult to react to - unlike other special arts of this type.

Like many brokenly powerful characters, Goku's best offensive trick is his Main Ability, which draws a brutal Ultimate Arts card that sports the first Super-Massive Damage multiplier (It's the same numerical multiplier as Supreme though, so SP SSGSS Vegito BLU is very annoyed at UI Goku pretending he's special), and it even cancels all enemy Attribute Upgrades.

This Main Ability doesn't just close out games, it completely shuts down enemy Crisis Fighters on command, letting it secure victory before Goku's foes have a chance to forfeit out of the Legendary Finish.

Once the Instinct Gauge is depleted, Goku has a very difficult time sponging hits. It's very easy to dismiss this deficiency because of the Gauge's existence, but there are plenty of situations where Goku will be a sitting duck defensively, and it will certainly be a problem if he's the last man standing.

Even with the Heal provided by his Main Ability and his constant 20% Damage Cut, his base stats are too lopsided towards offense for his bulk to be salvageable. In a meta plagued with Zenkai Fighters with stupidly high Defensive Numbers, it's difficult for Goku to gain the edge in this department.

The God Ki Tag isn't complaining in the slightest about -sign- being added to its roster. This Tag is full of absurdly powerful Support Fighters that can take Goku's Damage to the next level and shield him when his Gauge is depleted.

Characters like SP Vados GRN and Zenkai 7 SP GoD Beerus GRN provide Goku with the Support he needs to be an offensive bomb the moment he switches in, and the Green Cards provided by EX Whis RED make him a premier supporter for him as well, even if his stats are not up to par.

SP SSB Goku RED is a fantastic partner for a Purple with low defenses, and the Green Card he draws with his Main Ability can give UI the fuel he needs to dominate his foes in a single combo.

SP SSB Vegeta GRN and SP Goku Black GRN are great compliments in the Offense department. The God Ki Tag is overflowing with excellent fighters to pair with UI -sign-.

Everyone playing Dragon Ball Legends is of course overjoyed at the thought of Son Family receiving yet another top tier fighter. Not only does this tag boast 2 of the game's strongest Zenkai Fighters, Z7 SP SSJ2 Gohan RED and Z7 SP SSJ3 Goku PUR, both Fighters are poised to incorporate UI Goku.

Gohan Buffs Goku's Blast Attack and defends him from Yellow Fighters, and SSJ3 Goku enhances UI's attack and defense with his Z and Zenkai Abilities. SSJ3's Zenkai Ability is actually a fantastic way to circumvent -sign-'s poor defenses. This PPR set-up is nearly impenetrable and definitely the strongest Color Counter Tag set-up in the game.

A must-have Equipment greatly boosting Goku’s survivability with a boost to his Blast too.

This Equipment works very well with UI Goku due to his Unique Gauge allowing him to dodge extra attacks to stay on the field for longer to replenish his Vanish Gauge.

There are various options for the final slot. This Equip provides large Base Strike Buffs, boosting his Strike Attack, and in turn his Melee Special Move. If Goku is ran on a Blast Based Team, a Pure Blast Equip would be more beneficial here, like Hurry, Vegeta! or Explosive Clash. Alternatively, Let’s Go Vegeta! or You’re sure to win! can be used to buff his Blast Attack further with additional Special Move DMG.

He's considered 3 stars for the Tier List. At 6 stars, UI Goku would be top of Tier 1, and arguably S Tier.

If played perfectly, SP Ul Goku PUR is arguably the most difficult unit to play against in the game. However, he does have a ridiculously high skill cap. Despite his auto evade being beneficial for stalling, he can still be hit, and therein lies his biggest weakness by far: fragility. It’s not out of the realm of possibility for Goku to die in a single combo, even at neutral. His Extra Move has some of the best effects in the game, but is a “long” animation and can be played around, once again leaving him susceptible to heavy damage.