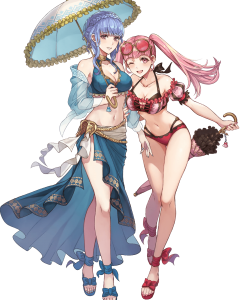 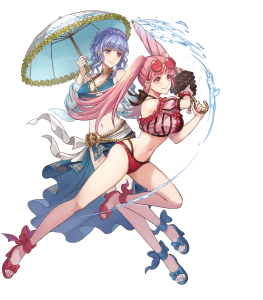 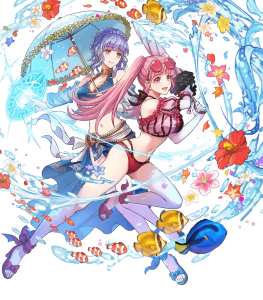 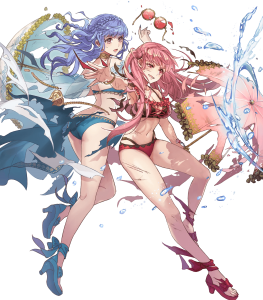 I Don’t Have Uno, I Have the Oldest XBox Known to Fódlan (Offensive/Support Hybrid)

Summer Hilda and Marianne pack exceptional utility via the power of their exclusive Sunshade Staff, featuring a myriad of effects that altogether distinguish the two from other healers.

As an added bonus, Sunshade Staff also reaps some advantages for the summertime duo themselves through innate Wrathful Staff and Atk/Spd Solo effects; this lets them operate as a reasonably strong source of damage output to their own right.

Despite being support-inclined healers, Summer Hilda and Marianne nonetheless wield a stellar base Attack/Speed of 37/40 which helps them deal damage and perform follow-up attacks with great consistency, especially when supplemented by the offensive perks of Sunshade Staff. This also lets them heal sizable HP as this scales off visible Attack.

Their status as a Duo Hero is yet another compelling boon in their favor, granting numerous advantages such as unparalleled scoring potential in Colosseum modes (as their BST will be counted as 190 instead of their base 161) and the ability to enable unique structures in Aether Raids. Most notably, though, this also imparts Hilda/Marianne with a Duo Skill of their own — and a relatively powerful one at that.

By merit of being a healer unit, Summer Hilda and Marianne are granted access to the useful Dazzling + Wrathful Staff combination to safely avoid counterattacks while unleashing consistent damage output. The ability to provide consistent sustain to their allies via healing Assists is also noteworthy in their case, as this means that tanks they support with Sunshade Staff may not necessarily need to run healing Specials themselves to circumvent damage taken. This allows the freedom to instead equip damage-dealing Specials for greater offensive ceilings — an advantage that Brave Lucina and New Year Velouria do not possess.

Lastly (but certainly not least), the Deer’s Two-Piece benefit considerably from their flying status as it adds on further to their sheer utility through unique mobility-based support, with skills like Ground Orders and Guidance boosting their team’s movement and positioning flexibility. This also lets Summer Hilda and Marianne assist their friends from more favorable positions as they are entirely unaffected by most terrain.

Summer Hilda and Marianne’s Duo Skill undoubtedly carries immense value thanks to the Isolation debuff it applies, but actually being able to leverage it in Aether Raids Offense is somewhat tricky due to how common the Duo’s Hindrance structure is on Defense maps. This prevents them from using it until either the structure is destroyed or the Duo Hero(es) on the opposing team are defeated, but their Duo Skill is unlikely to be needed by the time this is accomplished.

Accordingly, within the context of Aether Raids Offense, Hilda/Marianne’s Duo Skill should simply be viewed as an occasional bonus to enjoy on certain maps where the Duo’s Hindrance structure is not present or easily destroyed, but not something to be strictly relied upon. Also, this doesn’t entirely negate their usefulness either, since they still maintain access to their Sunshade Staff and various other strengths.

Their base Defense/Resistance of 20/25 alongside a meager HP pool of 39 renders them rather susceptible to most damage dealers, with archers being particularly deadly due to their effective damage bonus against fliers. Keeping her out of harm’s way is crucial, though this is thankfully somewhat simple as Hilda/Marianne can negate counterattacks during the Player Phase and should already be avoiding Enemy Phase combat in most cases.

Inflicts Atk-7 on foes within 3 columns or 3 rows centered on unit through their next actions and inflicts【Isolation】on them. Once used, Duo Skill cannot be activated again right away. At start of every third turn, if Duo Skill has already been used, unit can use Duo Skill again. 【Isolation】 Target cannot use or be the target of Assist skills through its next action. (Target can neither use nor be the target of skills like Dance and Sing, skills that neutralize penalties, like Restore and Harsh Command+, etc.)

Opinions on Tatiana
Looking for ideas on what to do with Tatiana. Rolling on this last banner got me…
+10 Shinon :feh_shinonpout: - "A single arrow, right between the eyes? Who else could make a shot like that? No one, that's who!"
After a long and perilous journey, I’ve found my first +10 5-star exclusive. It’s the…
Thigh gap. I mean Nyx
Pulled a few Nyx’s and I see a lot of life and death builds but I feel that’s…
How to get higher on aether raids
Hi guys. I was playing this morning my aether raid assault and I won… 320 meters or…
I think I.S wants me to +10 L! Lyn 😅
Free summons another Lyn Screenshot_2021-07-22-08-03-51-787_com.nintendo.zaba1080…
Read More