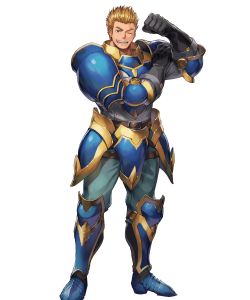 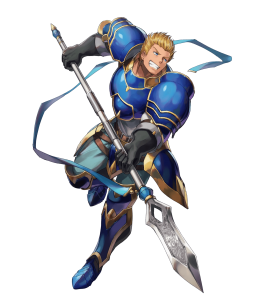 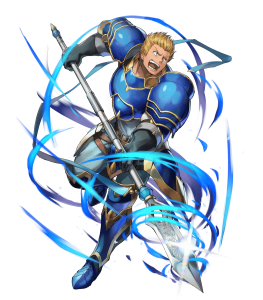 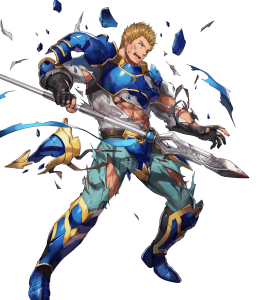 After Brave Edelgard, Gatrie is the second to show off the new generation of armors with an astounding 185 base stat total unmerged. He actually holds many of the positive qualities that Edelgard boasts:

Gatrie's BST is only one side effect of his armored status, whereas his other main benefit include access to the Fighter skill library. Bold Fighter and his native Crafty Fighter suit most builds very well; the latter in particular offers both an additional follow-up attack and an improved form of Guard in one B slot, which fortunately cuts out expensive inheritance trips involving Special or Vengeful Fighter.

In addition to Gatrie's native Spirited Spear—which gives both additional stats and a form of Special cooldown acceleration—he can turn to an entire collection of great lance weapons depending on his needs. Flowing Lance, Slaying Spear, Slaying Lance, and many more are at his beck and call.

Gatrie's min-maxed stats comes out to a very fantastic distribution in every stat except Speed. Investment in said stat is an obviously wasted endeavor due to how low it is—a paltry 17 Speed (just a point ahead of the lowest current value, 16). Resultingly, Gatrie can expect to get attacked twice by almost any foe at any given moment without Wary Fighter, cutting into his survivability a bit. Additionally, units with some form of Null Follow-Up can disable Gatrie's usual attempts at making follow-up attacks, which will be a sure disadvantage.

Gatrie's base Resistance is high, but not that amazing without investment. Repeated attacks against this stat will wear him down for worse eventually, especially if he's pitted against powerful green mages such as Ced, young Merric, or Thrasir.

Gatrie is unfortunately short of being the awesomeness that is Brave Hector due to his uncovered weakness to armor-effective weaponry. As such, attacks such as Slaying Hammer or Bridal Micaiah's Joyful Vows will do him in rather quickly in spite of defensive investment.

Furthermore, Gatrie's armored status limits him to a mere movement of 1 space per turn, which makes escaping from unfavorable situations or matchups a rather challenging effort. He will thus appreciate help from allies' skills such as Guidance, Reposition, or Armor March.

It takes quite a lot to stand out of the lance armor crowd, especially after Brave Hector and Gwendolyn have received quite potent weapon refinery. While Gatrie's power and versatility don't suffer from a lack of a unique skills (as there are ton of great Fighter and Lance skills as specified before), he can come across as a generic pick.

This is all about tanking everything with a smile then lowering his enemies Atk/Def and raising his Atk/Def during his next turn.
Because he can still take a good amount of damage from some mages in particular Sol is his recommended skill but Noontime works too for more frequent healing. Because he has no C skill or Seal to boost his movement, he’s better on a team with at least another armored unit with Armor March 3.
Because Courtly Candle+ is best on a slow unit, armored units are the best users of this weapon and with a SPD flaw, Gatrie is slower than Arden! But with an ATK asset, he’ll be able to defeat foes much faster than his SPD stat.
(I apologize if this explanation isn’t very good... it’s my first hero build post)