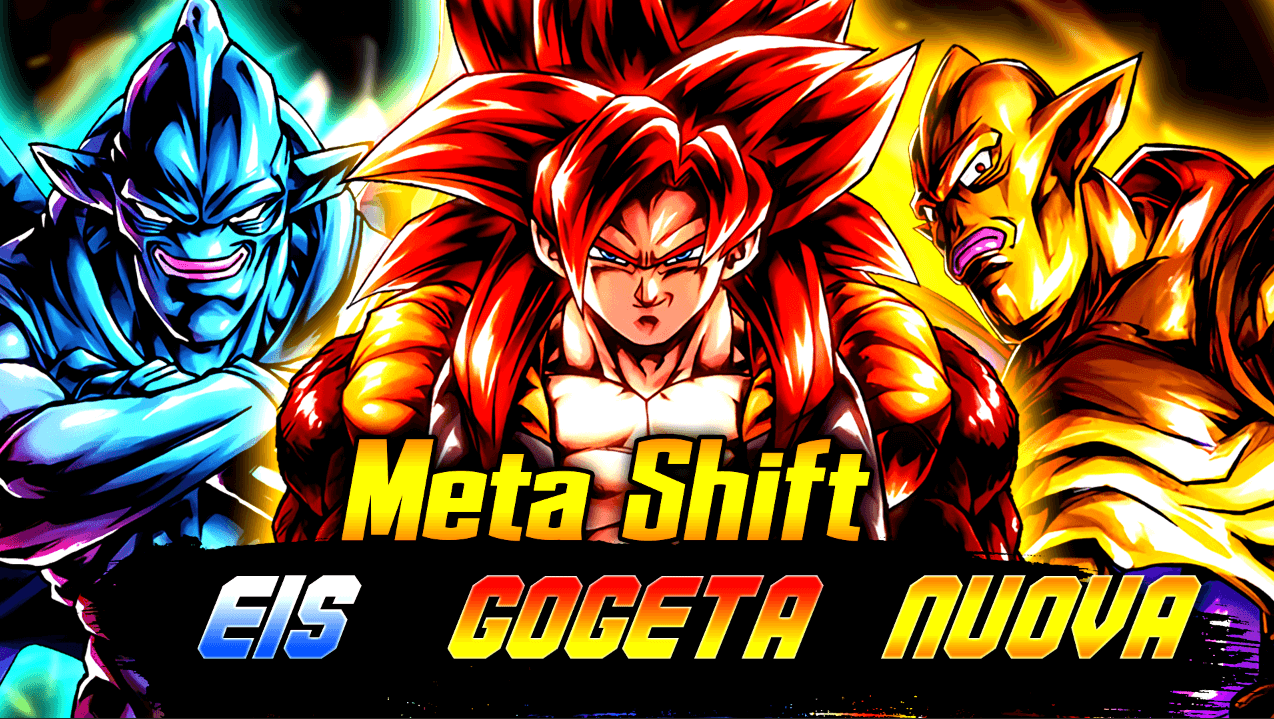 In what's basically a repeat of the last Anniversary in terms of Tags covered, the GT Banner joins the Zamasu-Vegito-Kefla Banner.

While there are two LFs this Anniversary, there is no doubt in anybody's mind that the spotlight is reserved for SSJ4 Gogeta, as he's even been put on the Dragon Ball Legends log and the GT ost "DAN DAN" will now permanently remain in our heads as it has been added as the only music in PvP (sigh).

Compared to the other Banner, this one has less versatility in terms of Teams the new Fighters can fit in, as the Shadow Dragons can only be used on GT. Still, that's not the end of the world, as the Team was in dire need of new great Fighters, so let's see if they're up to the task.

To represent SSJ4 Gogeta's smugness from the anime, the developers gave his Dragon Ball Legends version a rather Defensive toolkit that mainly makes him completely ignore the opponents' attacks early in any match. Other than that, he also has a very convenient and Unique Defensive Element Disadvantage protection, 80% Damage Reduction on the first combo that hits him, Blast Armor on Strike Cards, and Anti-Special Cover after he uses his Extra Move. All in all, it's fair to say it's really hard to make Gogeta lose his annoying smile.

But what about his Offense? Gogeta boasts a consistent 110% Damage Buff for the whole Fight, but not much else. "Isn't that enough?" One would be inclined to say, and it's generally true, but when it comes to Gogeta, his low Offensive stats make that Buff feel more impactful than most would expect. If you also consider the lack of consistent Arts Draw Speed, things get even worse, as Gogeta is fundamentally incapable of stalling, or pressuring opponents with long Combos in general. He still has some nifty utility effects, like Buffs Removal on his Extra Move ( useful to remove Damage Reduction ) , a Special Move draw on his first Special Move that connects with the opponent ( double Special Move can be deadly, but it doesn't really work at higher ranks ), and more interestingly, Element Neutral after his Main which makes his Ultimate Move basically impossible to stop ( although, his low stats can be detrimental here as well ).

Defensively, as highlighted previously, he's pretty much immune to everything early in the Fight, but after that, at least at 3*, he's actually pretty easy to take down regardless of his anti-Element Advantage Ability, as his Defensive stats are not noteworthy at all.

So, at 3* how good is Gogeta? His 3 out-of-jail cards ( 2 Covers and 80% Damage Reduction ) are without a doubt the most interesting thing about him, as that basically works the same regardless of stars, but other than that he's just a decent Fighter with no particularly impressive capability. At 6* he becomes considerably better, as his Damage output becomes quite good and he's able to Tank pretty well even by Mid/Late Game

Surprisingly (but not really), Gogeta isn't Core on GT, as Super #17 is just flat out better than him for the Team. The latter's Defensive utility is better and much more consistent for the whole Fight, and he can still pack quite a punch Offensively. Overall, he's just a much better Defensive pivot for the Team.

On Fusion Gogeta definitely is in a great spot, as he finds a Core that suits him perfectly and his Defensive gimmicks are incredibly useful for a Team that always lacked Defense. In fact, being able to nullify 3 combos on Fusion makes it easier for the Team to eventually gain priority and put the opponent in a long loop of Strike Cards and Blast Armor that turn into a Rising Rush pretty quickly.

His synergy on Saiyan is also worth mentioning, as he Buffs the Team at 6*. Of course, he can't replace SP SSJ3 Goku GRN, as he's effectively a weaker version of him, but the two of them can be paired together to take advantage of their multiple Covers, and Element Disadvantage Removal capabilities.

The kindest Shadow Dragon has a Super Offensive toolkit, and then some. In fact, he has access to Damage Buffs that can easily surpass 100%, Arts Draw Speed ( although not super easy to obtain, as he only gets it after he stayed 5 counts on the field, meaning he can't take advantage of it if you swap to him during a Combo ). Defensively, he has access to a typical barrier that turn the tables and put the opponent into a combo if activated against a short-range attack. However, the most interesting part of his kit is definitely his Main Ability, which perfectly represents his reputation. In fact, Nuova gets to face his opponent in equal conditions once he presses his Main, as both Fighters get locked in and both also lose their cards.The catch is that Nuova also gets Arts Draw Speed and a Vanish Regain. Obviously, this Ability can also be timed in a way it locks in an opponent without vanish. So much for "fair fight", uh.

His only real weakness is his low very low Blast Stat, which might make him awkward at times.

A quite basic kit overall, but Effective nonetheless.

On GT, Nuova has to face the "competition" of SP SSJ4 Goku YEL, which is almost poetic given how they were rivals in the series. This time, Nuova undisputably ends on top. He's just a superior Offensive Fighter, with a Main Ability that can be taken advantage of in various ways, and a barrier that makes him great for passive play as well. He fits on the Team pretty well, just make sure you don't pair him with Super #17 and SSJ4 Vegeta at the same time, as he feels really bad in a Blast focused Deck.

As a different face of the same coin compared to Nuova, Eis is a good Fighter thanks to his dirty tricks. He's mostly a Defensive Fighter that can make it quite hard for the opponents to even use cards through his Debuffs. Generally, his most versatile ability is the Strike Card Lock on the opponent when he switches Fighters. Against Female Warriors specifically, he also inflicts a +30 Ki to every card's cost to Female Warriors Fighters, which makes him a clever counter to Android #18 (but not foolproof by any means, as #18 can manhandle him regardless ).

Just like Nuova, Eis has a nifty Main Ability which ends up being the highlight of his toolkit. In fact, he simply resets the opponent's Vanish Gauge, halves his allies' sub count, gets a hefty Damage Buff, and draws a Special Move which can be used to immediately punish the opponent who can't vanish. Once again, simple but Effective. Such ability can also be paired with Nuova's lock in on Main Ability and subsequently followed by a Rising Rush, which basically ensures you can take out an opponent ( excluding a Rising Rush guess ), but the opponent can also prevent this from happening by switching out as soon as Eis activates his Main Ability.

He also has a Counter Extra Move which only works against Tap Attacks, Strike Cards, and Tackle, which doesn't make it very consistent, although if it works it can be deadly as it immobilizes the opponents and provides Eis of strong Damage Buffs.

As a Blue option on GT, Eis has no competition at all for the spot, meaning he automatically enters into the Core. He fits the Team decently as he's a respectable Defensive option with nice Offensive ceiling, but it's also true he's probably the weakest Fighter on the Team, so he's just a good option in the matchups that require you to bring a capable Blue Fighter.