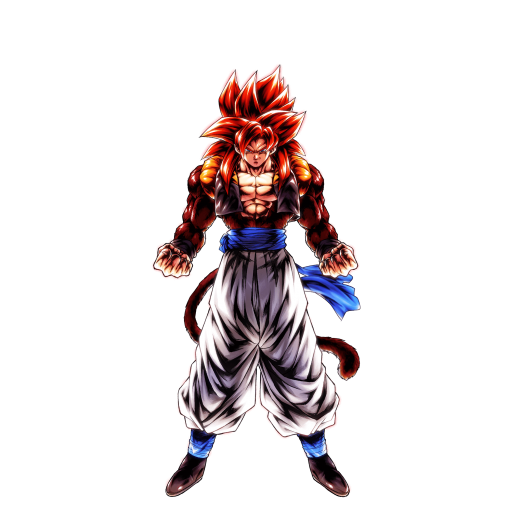 The power of fusion alongside the power of MONKE, SP LL SSJ4 Gogeta GRN has arrived as the focal point of the DB Legends 3rd year anniversary, which many players expected. SP LL SSJ4 Gogeta GRN has debuted as one of, if not the most tanky Legends Limited unit of recent times and he also boasts good offensive capabilities. His animations are incredible and is one of the most fun Fighters DB Legends has ever released.

SP LL SSJ4 Gogeta GRN has a very balanced toolkit and has the nifty ability to nullify unfavorable element factor with his unique ability as well as his main ability for a grand total of up to 4 times which is the most in the game. He has a very specific buff that he gains only when he kills Fighters that can revive which most see as a useless ability.

Nevertheless, SP LL SSJ4 Gogeta GRN hasn't disappointed and is ready to unleash the power of the MONKE.

SP LL SSJ4 Gogeta GRN’s first unique ability is one of the best single unique abilities in the entire game. He gains a whopping 110% Damage Inflicted when he enters the battlefield and gains an 80% Damage Reduction for the first combo. This is similar to SP Jiren GRN, and this unique ability allows Gogeta to comfortably tank any combo at the beginning of a battle.

This unique ability gives Gogeta the opportunity to safely take some hits from PUR Fighters as he gets type nullification for Damage sustained for 15 timer counts and it activates 3 times.

Say goodbye to paralysis, faint, bleed, and other abnormal conditions because SP LL SSJ4 Gogeta GRN won’t get affected by it as he nullifies abnormal conditions for the entire duration of a battle and it’s uncancellable. This puts him in a position where most of the RNG-esc mechanics in the game won’t affect him.

SP LL SSJ4 Gogeta GRN has blast armor on his strike attacks, special arts, and ultimate arts. This gives him one of the best neutrals in the game as he can put an insane amount of pressure on the opponent to not attack carelessly as he will punish you. This forces the opponent to not use Blast arts when they’re trying to frame-trap you as Fighters with blast armor can punish that as well.

One of the best Special Arts in the game, SP LL SSJ4 Gogeta GRN’s Bluff Kamehameha has a number of powerful effects that can change the tide of battle in an instant. He cancels enemy’s buffs (twice) which puts Fighters without uncancellable buffs in a detriment if they’re in a last-man-standing situation against Gogeta. He gains 50 ki, a 20% Damage inflicted boost and nullifies cover change for 10 timer counts which is a very powerful mechanic as it allows you to guarantee your combo to go through without interruptions.

Overall this Special arts is phenomenal and some might even say it’s too good.

SP LL SSJ4 Gogeta GRN has a very interesting Special Move, his Big Bang Kamehameha has a 30% Damage buff upon activation and has an advantage over most Special Moves in the game which is nifty. However, the interesting part about his Special Move is the fact that he gains a Special Move Arts card after he uses it (activates once) along with the 50 ki to go with it. This can be used to counter incoming Blast Arts, Special Move Arts, or even catching an opponent in a sidestep.

His ultimate arts, 100x Big Bang Kamehameha is not only visually pleasing but also incredibly powerful as it has the supreme damage impact multiplier and he gains a 50% ultimate Damage increase when it is activated.

Legends Limited Fighters are incredibly difficult to pull and as such, most of the player base will have them at 2-3 stars and their stats aren’t particularly good at this star count. Gogeta is no exception to this.

SP LL SSJ4 Gogeta GRN is the main GRN Fighter for the Fusion Warrior team, replacing SP SSJ2 Kefla GRN. He has a better neutral than Kefla and is better defensively while also being able to output good Damage. He also has the advantage of not being Strike or Blast oriented as he can deal Damage with both. Alongside his Super Saiyan Blue counterpart, SP LL SSB Gogeta YEL, they can deal devastating blows to the opponent while also having some fantastic Special Arts to capitalize on.

Sadly, SP LL SSJ4 Gogeta GRN is not the main GRN Fighter for the GT team as that spot is occupied by Z7 SP Super 17 GRN. Nevertheless, Gogeta can find some success on the team when he’s ran alongside both of the SSJ4s,  Z7 SP SSJ4 Vegeta RED and Z7 SP SSJ4 Goku PUR. This color wheel is fantastic and has the absolute power of the MONKE to destroy the opposition.

A self-explanatory Equipment choice for the vast majority of GT Fighters.

A HP Equipment is necessary on every Fighter due to the very large increases in survivability. This Equipment also provides Gogeta with a Pure Defense Buff against Saiyans. Alternatively, the following HP Equipment: Ha!! or These times were dark enough without you, can be used here.

Please note, this is the optimal Equipment for the Fusion Warrior Team. For the GT Team, You're Facing Me Now is the choice for a more offensive build, whereas Awakened Leave the rest to me! is for a more defensive build.

At ~3 stars, SSJ4 Gogeta’s team problems stem from SP SSJ3 Goku GRN being the primary Saiyan Green unit, and SP Super #17 GRN with his behemoth Zenkai stats/stalling capabilities being able to perform better at 7 (and potentially higher) stars in most instances. While SP SSJ3 Goku GRN still keeps the advantage over him when SSJ4 Gogeta is 6 stars, he closes the gap significantly with Super #17 as the main GT and Fusion Warrior green.