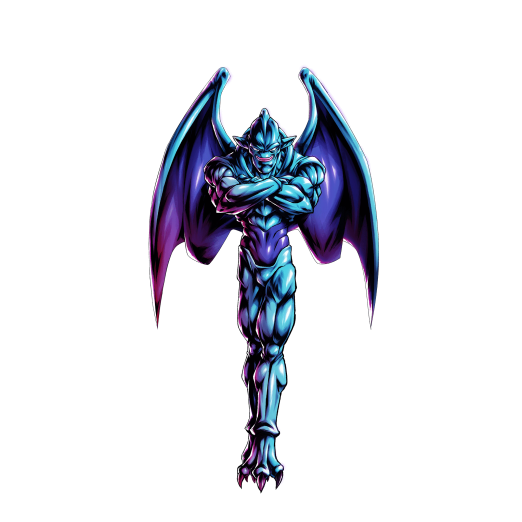 to interactions in the show, SP Eis Shenron BLU has an ability that can hinder Females’ ability to use their Strike Arts consecutively which is specific but also funny. Overall, he’s a great Fighter for the GT team.

SP Eis Shenron BLU’s main ability is great. He gets 50 Ki, more Damage, and shortens his GT allies’ sub count by 5 but the main attraction of his main ability is him reducing the enemies’ vanish gauge by 0.

This can be used in some setups to get guaranteed hits off on your opponent. A popular one is in conjunction with SP Eis Shenron BLU where Eis uses his main ability and then Nuova swaps in and uses his which puts the opponent in a position where they’re locked in and have no vanish.

When SP Eis Shenron BLU is faced with an enemy, he inflicts them with some powerful debuffs. He increases their Damage received by 30% which is a huge Damage increase for your team, he increases their sub count by 2 for 15 timer counts which will mess up the opponent’s swap ins and reduce their vanish gauge recovery by 50% which is great against Fighters that have vanish gauge manipulation, SP SSJ2 Kefla RED, SP LL Kid Buu BLU, etc.

SP Eis Shenron BLU has a counter Special Arts for Strike Arts, tap attacks, and tackles. This is incredibly powerful as tap attacks and tackles are used extremely often in neutral. This Special Arts also immobilizes the enemy which can be used to set up for powerful attacks and gives him a +50% Special Move Damage increase. A nice touch is that even if SP Eis Shenron BLU misses his counter, he gets a 30% Damage Reduction for 5 timer counts.

SP Eish Shenron has a basic 70% Damage inflicted buff when he enters the battlefield. Even though he gets more Damage inflicted from his main ability and debuffs, he still leaves much to be desired when it comes to Damage

SP Eis Shenron is the perfect color for the GT Team as they were in desperate need of a BLU Fighter. He synergizes incredibly well with his brother, SP Nuova Shenron YEL, and provides debuffs and utility to the GT team overall. He also has a great Z-Ability for the team as he buffs base Blast attack and defense.

Hurry up and die!

This Equipment amplifies Eis Shenron's strengths through additional Base Blast Attack as well as buffing his powerful Special Move after landing his counter.

Being a Ranged Fighter, a Pure Blast Equipment is recommended here. However, this Equipment requires a SSJ4 Fighter to be played alongside him.

Awakened Leave the rest to me! No. １

Unfortunately the Shadow Dragons do not have access to a HP Equipment as of writing these Recommendations. Therefore, this is the reasoning for this Equipment providing Eis with additional durability through a Pure Strike Defense Buff, as well as increasing his Strike DMG output.

This is not to say his Damage is particularly bad, but it will be hard for someone like Eis to measure up to a meta filled with high-stat Zenkai units. Despite this, he has quite a few sneaky aspects in his toolkit that can help him control the combat loop and unexpectedly take a unit out. Most notably, his Main Ability depletes the Enemy's Vanish Gauge entirely and draws him a Special Move with enough Ki to use it.