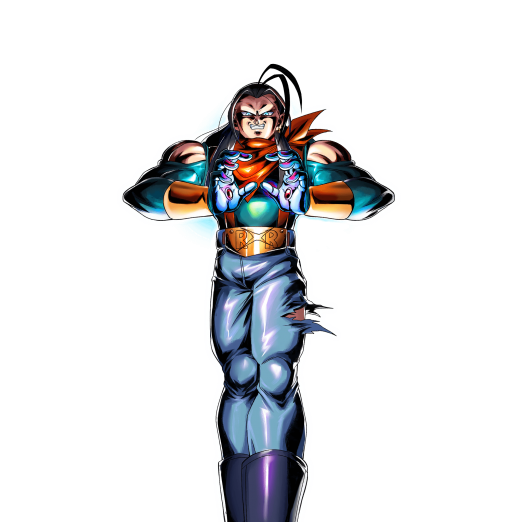 SP Super #17 has received the first Zenkai Awakening for a Fighter of the GT Tag and looks to start a chain effect of buffs for the GT Tag in the coming weeks. His Zenkai Awakening has made him even more annoying and insufferable to go up against, a common troupe of GRN Zenkai Fighters. His Zenkai awakening also boosted his offensive capabilities which was a huge flaw with him previously.

Overall a fantastic Fighter who has bolstered his team to new heights of annoyance and is ready to “Shock” the Dragon Ball Legends meta.

SP Super #17 GRN is a great Defensive switch-in due to his capability of absorbing Energy-based attacks. If he pulls this off, he reduces enemy Ki by 50, gains Ki equal to the cost of whatever Attack he absorbed, gets a Damage inflicted Buff, reduces Damage received, and restores his own Health by 10%.

This is required for #17's Damage to reach adequate levels, so it is best to bring him into combat when it is likely he'll be able to absorb an attack. Against Blast-oriented Teams, the threat of a #17 cover-change is enough to deter Combos.

His Ultimate Move, “Shocking Death Ball” is one of the most powerful Ultimate Moves in the game, in terms of its effect, and it got a minor but much-needed upgrade with his Zenkai Awakening. Not only does he inflict paralysis on all enemies, but he also removes enemy buff effects on activation of his Ultimate Move which renders Fighters who were immune to his paralysis, to get paralyzed.

Paralyze is a deadly status that locks #17's foes down, and if they dare to flee, their Team is only Debuffed further, and #17 draws another Extra Arts Card.

SP Super 17 GRN’s offensive capabilities have seen a decent upgrade from what they were previously. Obviously, he still has to land his Extra Arts or successfully land his cover change for his Damage to reach the levels of “good”. Even so, his new Unique Ability, “Culminating Advanced Technology”, gives him a 45% Damage Inflicted increase which helps his Damage a lot. Forty-five percent(45%) on its own isn’t all that impressive but due to the nature of Zenkai Awakenings, his stats are high enough to where he will be doing good Damage.

He also applies a 15% Damage increased debuff on the enemy which also helps his Damage. However, his Damage becomes really good during the mid-late stages of a match where you can secure a kill with him/you’ve killed one of your opponent’s enemies as he gets a 20% and 30% Damage increase respectively if you’ve done either of those things.

Too many Extra Moves

SP Super #17 GRN increases Strike Arts cost for the Enemy when they switch out, and draws an Extra Move. Both of these are still good effects, but he’ll find his hand will fill up quickly with Extra Moves, which he can’t really utilize consistently. It’s best to pair him with a Fighter that can make use of these.

Even though his Zenkai Awakening gave him boosts to his Damage output, his strike Damage still isn't great. He doesn't buff it directly and has a low base strike attack stat for a Zenkai Fighter

SP Super 17 GRN has bolstered his way back into the core for the Androids team and has, surprisingly, made them even better than what they were before. He adds more defense and offense than SP Android 16 GRN and is more reliable defensively than SP Android 21 GRN. He also strengthens SP Perfect Form Cell RED’s revive mechanic by being an insufferable tank to where people are going to be hasty to use their Rising Rush. With this, he has now become the main GRN Fighter for the Android Tag.

Even though SP Super 17 GRN is the best Fighter on the GT team, the team still isn’t viable enough to see play in PvP. Even so, the sheer pressure that SP Super 17 exerts is enough for you to find little success with the GT team in PvP.

A must have due to the amazing stats it gives across the board. #17 greatly appreciates the Health Buff in particular.

Another exceptional Awakened Equipment that's perfect for what SP Super #17 GRN wants to utilize. The added Health brings his base-line Defensive Abilities to the next level.

This is an excellent choice for #17 for the Androids Team, giving another Pure Buff to further increase his defensive capabilities.