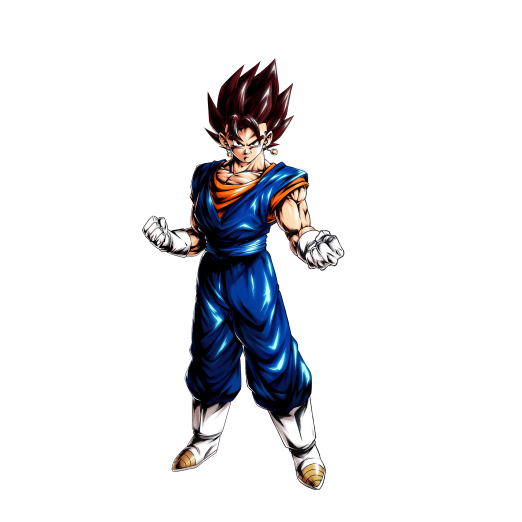 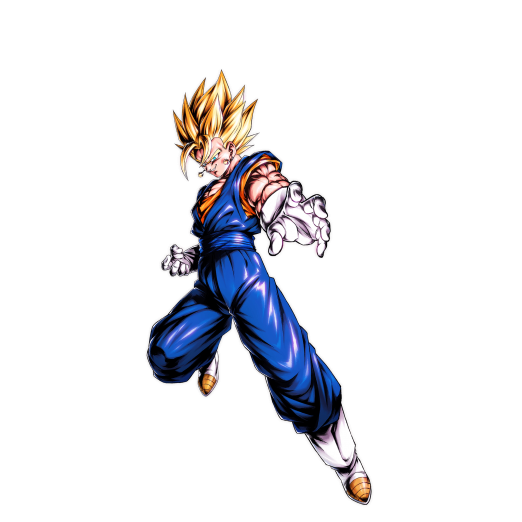 The ultimate fusion descends, and his arrival breathed new life into the Fusion Warrior Tag on release. SP Vegito YEL is a brutal, resilient, versatile Fighter that completely alters his playstyle when he Transforms, shaking the world in the process.

To call Vegito's Transformation the most impactful to be released in the game so far is an understatement; it so decisively provides the Golden Warrior with everything he could conceivably need to rain hell on his foes.

The scaling power of his Special Arts Card, the Spirit Sword Rush, is but the icing on the cake, capable of shredding the most dedicated Defensive walls and even putting dents in Fighters with Color Advantage.

The Ultimate Fusion might not be perfect in every respect, but his overwhelming Offensive kit is more than capable of cementing his place on the cores of Saiyan and especially Fusion Warrior Tag Teams.

A Moment to Prepare

While SP Vegito YEL is a much stronger Fighter after he Transforms, his Untransformed state absolutely has its merits. At the start of combat, Vegito's base form grants itself an uncancellable +50% Buff to Blast Attack and a free +20% Sustained Damage Cut, priming him for his singular mission - taking one hit.

After Vegito sustains Damage of any kind, he will instantly reduce his foe's Dragon Balls by 1 and replace one of his Cards at random with an Extra Arts Card, which will heal him for 10% of his Health (ameliorating some of the wounds he took to get it), Increase his Inflicted Damage by +20%, and reduce his Sustained Damage by+10% with permanent Buffs.

After accomplishing this, Vegito is free to use his Transformation at his leisure, as essentially a Main Ability which refills his hand and confers onto him an incredible series of Buffs.

When Vegito assumes his immaculate Transformed state, his power frankly skyrockets, as his hand is fully restocked with 4 new cards and he attains a collection of Buffs, and what a collection it is, including a permanent +50% Buff to Inflicted Damage, a +50% Sustained Damage Cut Buff for 10 Timer Counts, and a frankly absurd +100% Buff to Ki Recovery for 20 Timer Counts.

These Buffs stack with those accrued during his time in his base form, culminating in an incredibly well-rounded Swiss-army-knife Fighter who is able to momentarily excel in every role.

While Vegito is indeed versatile, his true calling is Offensive domination, which he accomplishes by increasing his Card Draw Speed and Restoring his Ki whenever he evades an Attack.

This devastating, Blast Armor-possessing Special Move Arts Card is as stylish as it is Damaging, and speaking of Damage, its Damage output is increased by 10% (and its cost is reduced by 5) for 15 Timer Counts every time Vegito lands a Strike or Blast Arts hit. As a Combo finisher, this maneuver will leave few survivors.

This Card isn't just powerful; it's accessible. Vegito can instantly draw it with his Main Ability after a mere 5 Timer Counts elapse after his Transformation, and this Ability provides him with 50 Ki and the coveted 100% Vanishing Gauge restoration Buff, allowing him to weave it into his Combos much easier or whip it out in a pinch.

Seeing as Vegito's goal is to rack up long Combo strings that end in a flourish of Spirit Sword slashes, it's fitting that he has just the tool to enable Combos - his Extra Arts Card, the Erasing Strike. On activation, this ranged projectile restores Vegito's Ki by 50 and increases his Inflicted Damage by 20% for 10 Timer Counts.

If this card lands a hit, it sets its target up for a fatal Combo. This Card gives Vegito excellent neutral coverage and ensures that he'll be able to hold his own in the late game, even if he's the final Fighter remaining.

At Odds with Himself

SP Vegito YEL possesses barely any faults; his Base Form serves a purpose and its existence essentially gives him two Main Abilities, his Damage is through the roof, and he can hold his own in the late-game thanks to his multitude of uncancellable Bufs, yet he still has a small issue holding him back.

Vegito's base and Transformed states have different roles, with the former being more Blast oriented and the latter being more Strike oriented. This means that Vegito's addition of a Blast Arts Card to his Team's deck is a bit of an annoyance after he Transforms, especially considering that Super Saiyan Vegito and the Fusion Warrior Team at large is Strike oriented.

SP Vegito YEL may not be what this Team needed, that being an excellent Defensive or Support Fighter, but though he's not precisely what the doctor ordered, he's still a star on this Tag

SP Super Vegito PUR appreciates the presence of his momentarily Untransformed doppelganger, though the two of them are both selfish Fighters that don't give much back to their community so to speak.

SP Vegito RED might not be strong enough to see consistent Core usage anymore, but his Z-Ability is an instrumental component of SP Vegito YEL's survivability. A more Offensive option is SP SSJ Gotenks RED. Gotenks' burst Damage in the mid-game can set up a situation where Vegito can carry the final phase of the match by himself after the aforementioned Fusion puts massive dents in the enemy line-up.

Despite his rarity, EX Gogeta RED is another core Red, and arguably superior to SP SSJ Gotenks RED. He provides the entire Tag with the Support Fighter they needed.

This Equip's Buffs to Vegito's relevant Offensive Stats and its fantastic Defensive boost gives Vegito everything he needs to throw out hits and sustain them himself.

SP Vegito YEL wants all the Strike Attack he can get post-Transformation, and the fact that this Equip offers that in the form of a pure Buff alongside an appreciated Blast Attack and Defense Buff makes this one of the strongest Equips Vegito has access to.

SP Vegito YEL has very high Blast Attack, and this Equip provides all that and more with a sizable Health Buff and a Damage Buff against the Hybrid Saiyan Tag.

His “This is Super Vegito!!” Main Ability draws him an enhanced Special Arts Card after he’s used a few cards (which is ideally when it should be activated), which is something that must be played around.

SP Vegito YEL dropped to Tier 2 before SP SSGSS Gogeta YEL came out and flat out replaced him, but now his spot in Tier 2 is solidified.