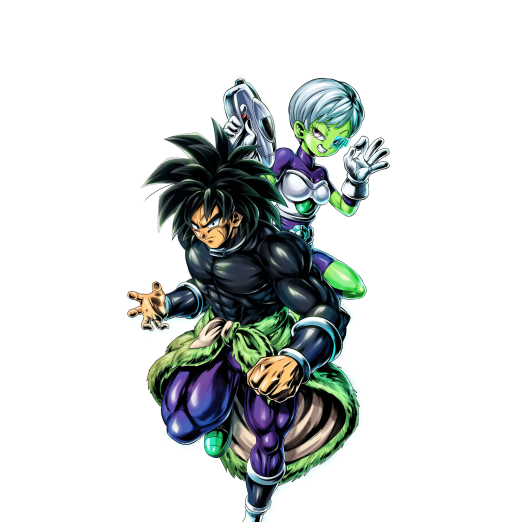 SP Broly: Cheelai BLU introduces the assist mechanic into Dragon Ball Legends, and rest assured, they are far from a gimmick. Broly and his...friend are capable of absurd Damage output; they stack permanent Inflicted Damage Buffs incredibly quickly as they swap in and out of the battlefield.

Cycling quickly and obliterating their foes with Strike Damage isn't all they're capable of though. They also are deceptively defensive, what with their ability to Heal every time they retreat and permanently reduce the Damage they receive when they activate their Main Ability.

That's not the extent of their utility. They can potentially eradicate the threat posed by a foe with their fortune-based Buff-removing Extra Arts Card, and even act as a win condition in and of themselves with their Timer Count dependent Dragon Ball acquisition effect. This is a Fighter worth fearing, especially if they have Support behind them.

Broly and Cheelai do a lot, but the focal point of their kit is scaling Damage quickly and decisively. Simply entering the field once grants Broly a permanent, unstackable +30% Damage Inflicted Buff, and it only gets crazier from there.

Every time they're switched to standby, they get another +20% permanent Inflicted Damage Buff, which can stack up to +80% after 4 Switches. To ease this process along, Broly reduces his Sub Count to 7 the first 3 times he's switched to standby, so it doesn't take nearly as long to get the ball rolling as it initially seems.

Finally, their Main Ability blesses them with a +40% Strike Damage Buff for 20 Timer Counts, as well as 50 Ki, an Extra Arts Card, and permanent a +20% Sustained Damage Cut, giving him monstrous Damage on command. Altogether, it's not uncommon for Broly and Cheelai to reach ludicrous Buff totals in combat.

The Most Resourceful Member of the Force

Broly and Cheelai's Extra Arts Card might not turn the tide of a match by itself in most situations, but it can be contextually game-winning. This charging attack with Blast Armor seamlessly chains into any other card, and can either reduce enemy Dragon Balls by 1, remove the foe's Attribute Upgrades, or destroy they foe's hand.

The former two effects can be incredibly impactful, with the Buff Removal effect standing out. Against certain late-game Fighters, like Broly and Cheelai themselves, that utility can potentially carry the Team to victory.

Destroying the foe's hand is not quite as useful, considering that by the time Broly chains the rest of his hand together, his target has likely drawn a whole new hand. It can be strong against Fighters that hold on to Ultimate or Special Arts Cards that they've obtained from Main or Unique Abilities, but that scenario is exceedingly rare.

Whenever Broly switches to standby, Cheelai's Support Heals him for 10% of his Health and cancels his Attribute Downgrades, which is fantastic in match-ups where Debuffs and incremental Damage are common.

SP Broly: Cheelai BLU have the ability to obtain Dragon Balls simply by breathing. After 40 and 60 Timer Counts, the pair adds a Dragon Ball to their Team's collection, accelerating access to the unfair Rising Rush.

This ability activates whether they're on the field or on standby, so it's fairly absurd in the exact situation it was designed for - the mid-game.

Their Own Worst Enemy

It's ironic that SP Broly: Cheelai BLU have a Buff Removal mechanic, considering they're so vulnerable to them themselves. If their Buffs are purged while they have a friend to switch into, they're not slowed down too much, as they can regain their +30% Damage Inflicted Buff when they enter the field again and re-stack their scaling Buff.

In crisis scenarios, where they are the last Fighter alive, they do not have this luxury. Yoinking their Buffs at that critical juncture will all but seal their fate, so it's best to be wary of the enemy Team's late-game strategies when using the Frieza Force all-stars.

The Anger Shout, the pair's Special Move Arts Card, is really nothing special. The ranged projectile only deals Major Damage and increases the Strike Damage the enemy sustains by 20% for 15 Timer Counts, hardly a game-changer.

SP Broly: Cheelai BLU fit right into this immensely powerful Team, and they synergize beautifully with it given the nuances of their toolkit and their Strike-oriented nature.

Specifically, Broly and Cheelai are amazing friends with SP Full Power Boujack PUR, as they adore his Offensive Support Buffs and the 10% Heal that they grant themselves when they switch to standby off-sets the Damage caused by Boujack's trademark cover-change.

SP SSJ Youth Gohan YEL appreciates having a Fighter around that can check enemy Reds, and the Extra Arts Card Broly and Cheelai draws can enable Gohan's deadly Power Surge.

Because Broly and Cheelai are categorized as a Saiyan, they enable SP Bardock YEL's full Unique Ability, giving him serious firepower and Defense.

There are a ton more Fighters that the pair work with - SP Hero Tapion RED, SP Super Janemba RED, and SP Goku GRN all enjoy the presence of this dynamite combination.

The aces of the Frieza Force are right at home on its Tag Team.

Their synergy with their boss, SP 1st Form Frieza PUR, is frankly insane - Frieza grants them Damage Support and Broly/Cheelai reciprocate by providing him with an Extra Arts Card. The two of them are a deceptively durable duo thanks to their Damage Reduction and Healing effects that activate when they switch.

To mitigate Damage, the Team can rely on SP Final Form Frieza: Full Power YEL as the primary Defensive pivot, though all 3 members of the squad are able to take hits if the situation calls for it. SP Final Form Frieza RED can be used in this Fighter's place particular match-ups, as can SP Golden Frieza GRN.

Because they possess the Frieza Force Tag, this troublesome pair has access to the Tag's best Equip. This monstrous Buff to all their relevant stats, most notably Strike Damage, significantly increases their overall Damage.

This Equip is simply a must-run for all Strike-oriented Movie Saga Fighters.

Again, their Frieza Force denomination comes in handy. This Equip accelerates their durability into the stratosphere, and should be run on Broly and Cheelai when they're on Defensively oriented Team Cores.