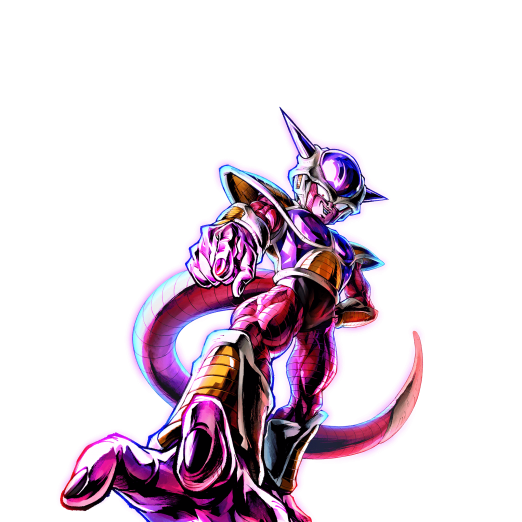 The emperor has received his Zenkai Awakening and looks to take over the meta with his forces!

Unexpectedly, Frieza's Zenkai did not boast his Offensive capabilities as much as we'd expect but they did improve on it which makes him deal good Damage. He's incredibly bulky and they buffed his support by a tiny amount to make his allies and himself hit a little bit harder.

Frieza continues to contribute to his Team's bulk with self-Healing and Sustained Damage Cut - he is a very well-rounded emperor.

Fight and Die For Me!

SP 1st Form Frieza PUR’s main strength is making his allies better, and he does a great job at it; he Buffs their Offenses with +30 Ki Restoration when switching to standby. His Extra Arts Card can also reduce their Substitution Counts by 3, which keeps the tyrant's Team's tempo high.

The most impactful Support he provides comes courtesy of Buffs, +350% Inflicted Damage and a +50% Ki Recovery, that apply at the start of battle and only dissipate when the racist emperor falls. In Crisis scenarios, these Buffs allow Frieza to hold his own, becoming his own pillar of Support.

Don't You Dare Touch Me

This Fighter has a rather interesting set of Defensive Abilities. His Cover Change Effect that counters Strike Attacks isn’t hard to pull off and it can be followed with either a Special or an Extra Move, with the latter being the most destructive option.

Secondly, while his permanent +35% Sustained Damage Cut that he grants himself when switching to standby and his marginal +10% Self-Healing per switch aren’t enough to make him a dedicated Defensive Fighter, they’re nice additions that help him stay alive in the Match long enough to showcase most of his tricks.

They also contribute to his strength in Crisis scenarios, where he has both a constant Damage Buff and Sustained Damage Cut. He is a rather tricky Fighter to keep down.

Few Supporting Fighters have an Offensive Burst comparable to this Fighter’s Ultimate Move, which possesses Blast Armor and will consistently inflict devastating Damage. The best part of Frieza’s most glorious attack is that it ignores Sustained Damage Cut, something that plenty of Meta Fighters have.

Using it in combination with this Fighter’s Extra move is generally the best way to ensure it finds its mark. The Arts Card itself Buffs its Damage by nearly 100% when every modifier Buff is applied at once. Against Saiyan foes it deals even more Damage, ensuring that the targets of his ire will not survive his onslaught.

With his Zenkai Awakening, SP LL 1st Form Frieza PUR now gets some decent Crisis buffs when one of his allies dies. He becomes immune to all Attribute Downgrades for 30 timer counts which is really good in the current meta as there are a lot of Fighters with debuffs.

He gets a 20% Damage increase that’s uncancellable which helps him pack a harder punch and he has reduced cost to his Blast Arts which synergizes well with the +1 Card Draw Speed he gets upon entering the battlefield.

SP 1st Form Frieza PUR doesn’t have too much to offer Offensively aside from his Ultimate Arts. In fact, his only Offensive Buffs come from his Team Support and he’s less than stellar in Last Man Standing situations, at which point his Debuffs can no longer be applied.

As he's a Purple Fighter, SP 1st Form Frieza PUR has to directly compete with SP Coora PUR for a spot on the Lineage of Evil Team Core. Cooler is still generally considered a Top Tier Fighter with very good Offensive and Defensive capabilities; he is only held back by his lackluster Team quality.

With Cooler occupying Lineage of Evil's Purple spot, it’s really difficult for the new Frieza to directly replace him. They can be played together, but that would only be optimal in specific situations where it’s safe to play two Purple Fighters. For this reason, SP 1st Form Frieza PUR’s usefulness is limited.

SP LL 1st Form Frieza PUR is easily the best PUR Fighter for the Lineage of Evil team as he provides great support buffs towards the team and he holds a Special Move Arts Card that Fighters such as SP LL Final Form Frieza YEL take advantage of.

SP LL 1st Form Frieza PUR is the glue of the team while also being a Fighter they can rely on defensively as he has high defenses and his Strike Cover is fantastic due to it being able to chain with Special Moves and his Extra Arts.

Frieza Force has seen some pretty significant buffs in the past couple of updates and SP LL 1st Form Frieza PUR’s role for the team is similar to his role on Lineage of Evil. His support and held Special Move Card works perfectly well with SP LL Great Ape Vegeta RED.

On Frieza Force, SP LL 1st Form Frieza PUR doesn’t have to carry most of the defensive load as SP Robbery RED does the job fantastically and Frieza’s support will help with his Damage

Wow, what a great show!

LF 1st Form Frieza's Platinum Equipment is an obvious must have.

Because of the insane amount of Special Moves Frieza will be performing, this Equip's Buffs to Special Move and Blast Damage will undoubtedly pay dividends, especially in long games.