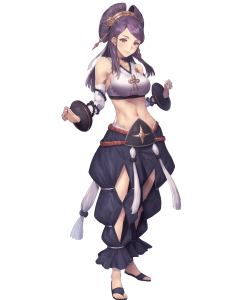 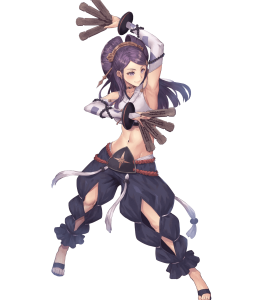 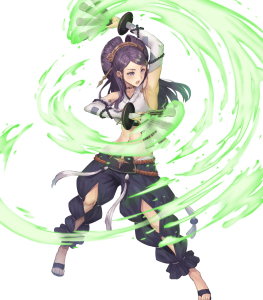 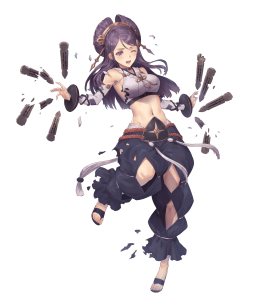 Although nothing particularly new or exciting, Orochi’s exclusive Tiger Spirit remains a great accompaniment to her statline’s inherent strengths and cements her combat performance through improved damage and magical durability. The tome’s ability to apply the Panic debuff is somewhat more situational but nonetheless remains quite handy when it comes into play, in addition to providing some Aether Raids Defense utility.

The Merry Diviner’s statline stays true to her appearance in Fire Emblem: Fates, showcasing phenomenal values in both Attack and Resistance. While the latter remains useful for leveraging Resistance-based Specials and magical tanking, Orochi’s base Attack of 40 is especially notable given her ability to deal magical damage and access to a four-point Asset in the stat; this alongside the boosts from Tiger Spirit provides a fearsome foundation for raw damage.

Orochi’s performance is further supplemented by the immense skill availability that her infantry status brings. Through access to powerful and coveted tools like Lull Atk/Res, Special Spiral, Sturdy Impact, and more, she showcases great build flexibility to shine in whatever way you may need her to with greater ease compared to her mounted counterparts.

With the majority of her stat points being allocated towards Attack, Resistance, and HP, Orochi’s Speed and Defense are both quite disappointing — having only 24 Speed makes performing and avoiding follow-ups naturally a long-shot, and her equally poor Defense of 24 means that physical threats will have a particularly easy time tearing through her health. This combined with her green coloring also gives Orochi a bit of a hard time in Aether Raids Offense if chosen as a superunit given how common red frontliners are, like Kempf, Eliwood, and most notoriously Legendary Sigurd.

● This build mainly focuses on Orochi's great attack and resistance and utilizes Tiger Spirit as well. It's also a low budget build for her if you don't want to invest in her too much, and it's a pretty suitable general use build for her.

● Mirror Impact is an amazing skill for Orochi because it increases her attack and resistance when she attacks as well as Tiger Spirit which adds +12 Atk and +16 Res in her attack which makes it easier for her to one-shot her opponents. If you don't have a fodder for Mirror Impact, then you can use Mirror Strike, which Orochi already comes with. If you want to make her more of a Defensive Nuke, you can give her Mirror Stance. The main idea for her Passive A is to use any Atk/Res boosting skill.

● This may not be a popular skill for Orochi to have, but Vantage is a fantastic match with her because since she has less defense, her HP is more liekly to go down quicker, and since she one-shots easily, she can use Vantage and defeat her opponent on enemy phases better. Note: if you use a Push skill, Vantage will work easier and more effectively. If you don't want to use Vantage, you can use Chill Res, or Lull Atk/Res to lower her opponents resistance to also help her one-shot easier for units with higher resistance. You could also use Atk/Res Link if you want since Orochi comes with it, but it isn't really amazing with this build and it's sometimes hard to use in battle.

● Rouse Atk/Res is an amazing skill for Orochi to have because it boosts her attack and resistance even more with the other skills she has which makes her almost unstoppable from one-shotting most of her enemies, and taking more magic hits better. If you want Orochi to also be a utility, you can give her Joint Hone Atk, or Atk Tactic if your on a budget.

● Orochi is flexible with choosing specials, because most of the only types that don't work with her are defense ones. The main specials I would recommend for her would be Iceberg, Glimmer, and Draconic Aura. These are all pretty easy specials to obtain fodders for and they're really good to use with her.

This build seeks to take advantage of Orochi's fantastic base attack & the offensive prowess of her innate Tiger Spirit. Though it relies on heavy investment to truly shine, this Player Phase Nuke rendition of Orochi is fairly simple to play.

● Death Blow 4 offers an unparalleled +8 Atk which, when considered alongside Tiger Spirit's innate +6 Atk, makes for an incredible combined +14 Atk in-combat buff. It is also worth considering Sturdy Impact 3 or Atk/Def Solo (3 or 4) over Death Blow (3 or 4) because these skills can help mask some of Orochi's weaknesses to DC Speed Tanks &/or DC Tanks with high Resistance; however they do not provide the same level of consistent damage. In the event that Death Blow 4, Sturdy Impact 3 & Atk/Def Solo (3 or 4) are not available, one could also consider Atk/Def Push 4, Mirror Impact 3 (this strengthens Orochi's natural ability to safely initiate into most mages by providing follow-up denial, should Orochi fail to one-shot - therefore increasing survivability, as Orochi will almost always be doubled - as well as an additional +10 Res in-combat buff), Atk/Res Push 4, Death Blow 3 (fairly accessible), or another Atk boosting A Slot (boosting Spd provides little to no advantage, so one should avoid Atk/Spd boosting A slots when possible). It is also worth mentioning that Push skills can compromise Orochi's ability to consistently perform, should she be unable to reliably perform one-shots, as her threshold for surviving retaliation is drastically lowered after each battle.

● Given the one-shot nature of her player phase build and her inability to consistently perform double attacks, there are few B Slot skills that provide comparable value for Orochi as Lull/Atk Res 3. Canceling out visible buffs to Atk & Res alongside a -3 debuff to each of these stats is huge for increasing Orochi's survivability and damage against teams that can consistently stack buffs. If in need of a cheap alternative, Chill Res 3 and similar skills can also help increase her efficacy against Res tanks.

● Joint Drive Atk is fantastic as it allows Orochi to provide utility while increasing her own damage. Similarly, Rouse Atk/Def/Res, or Odd/Even Atk Wave, are also fantastic for Orochi as they increase her damage, however, they are susceptible to Lulls & Panic skills.

● Orochi can choose between a myriad of specials, but this build of Orochi does not rely on or benefit from consistent specials due to its lack of doubling/special CD reduction. For high damage, Iceberg and Glacies are strong specials - dealing 20+ - 30+ damage. However, without significant special CD support in the form of team support or a sacred seal/skills, it will take careful target selection & multiple battles to effectively make use of these specials. As opposed to these high damage specials, Orochi can somewhat mitigate her lack of special CD manipulation by using a special like Glimmer that has a low base cooldown. Glimmer synergizes with her already high damage to cement one-shots while being more consistent.