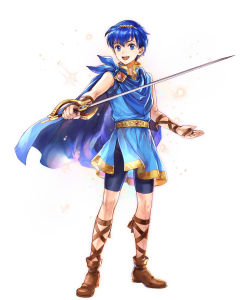 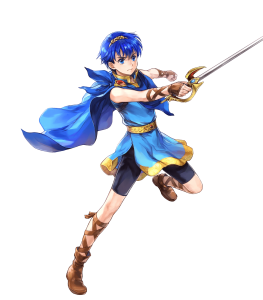 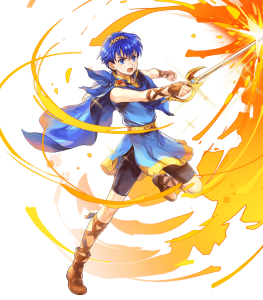 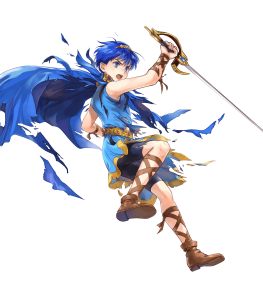 Ironically, Young Marth’s offenses are substantially stronger than base Marth’s offenses, clocking at an impressive 36 Attack and 37 Speed. With a great offensive statline, Marth can consistently deal high amounts of damage and perform follow-up attacks.

41 HP, 31 Defense, and 26 Resistance grants Young Marth a decent 71 physical bulk and 66 magical bulk. While his magical bulk may seem on the low side, Marth also has a Resistance Superasset, meaning an Asset in Resistance will increase his Resistance by 4 (rather than 3) to 30 (rather than 29). Marth’s high Speed also allows him to utilize Repel and Close Call efficiently, which reduces the amount of damage Marth receives by 4% for every point of Speed he has over the enemy, capping at 40% (a gap of 10 Speed).

Rapier is a great personal weapon, granting Young Marth +3 Speed, effective damage against Cavalry and Armored units, and Vantage (allowing Marth to counterattack before the enemy can attack if his HP is ≤ 75%). +3 Speed increases Marth’s chances to perform a follow-up attack and slightly increases his damage from Hero’s Blood, effectiveness against Cavalry and Armored enemies allows Marth to consistently OHKO them, and Vantage can potentially allow Marth to sweep an enemy team before they can attack him on Enemy Phase.

Hero’s Blood is a reskinned Fire Emblem; that is, a 2-cooldown Special that grants bonus damage equal to 30% of Young Marth’s Speed and grants +4 to all stats to Marth and all allies after combat. Because of its low 2 cooldown, Marth can use Special Spiral in his B slot to immediately ready Hero’s Blood after it is activated for the first time. With this, Marth can become a fantastic OHKO nuke that can even perform a follow-up attack if he fails to OHKO thanks to his impressive Speed. He can also contribute supportively with his +4 spectrum buff after combat.

As an Infantry unit, Young Marth has access to some of the most useful skills in the game, including Special Spiral and Null Follow-Up. Given that Infantry-effective weapons are so rare and niche, Marth rarely needs to worry about being OHKO’d.

Susceptible to Panic and Chills

Young Marth’s high stats come at the cost of being susceptible to Chill skills, which inflict -7 to a stat to the enemy with the highest value in that stat (for instance, Chill Spd inflicts -7 Speed on the enemy with the highest Speed). Marth’s HP also fails to reach values high enough to consistently avoid Sudden Panic and Panic Manors, which can be detrimental if wanting to use him as a superunit.

Some of Young Marth’s strongest sets rely on him OHKOing the enemy. While he can frequently perform a follow-up attack to KO the enemy if his first attack didn’t, he’ll still be taking damage from the enemy’s counterattack.