The Growth of Son Family 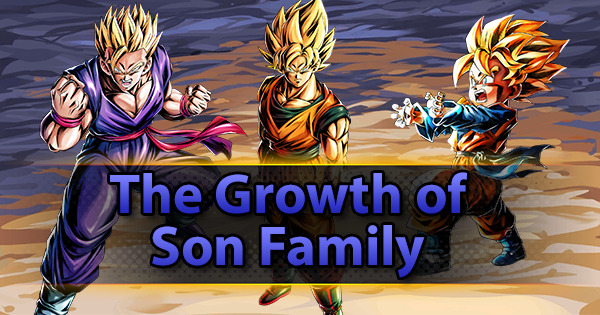 Son Family is now one the most competitive Teams in the Meta, but it hasn’t always been that way. This article will try to analyze its changes throughout time and how they made it so strong.

Son Family has always been a fan-favorite Tag because of its roster being filled with Goku’s Family--something that has also always led people to believe their potential in the Game was really high. However, this has not been the case for the past few months due to the Tag having sort of an identity crisis. Specifically, Son Family Team had to make Strike-centric Fighters coexist with SP SSJ2 Youth Gohan RED for a long time, and it just couldn’t work.

While the release of SP SSJ Kid Goku GRN partially fixed that problem, it still wasn’t enough to make Son Family one of the strongest Teams in the Meta.

In the past, the Team was lacking some very relevant things that made it weaker than others. To begin with, this Team lacked any kind of Support. Sure, SP SSJ Kid Goku GRN--The most popular Goku variant at the time--getting defeated made SP SSJ2 Youth Gohan RED’s Ultimate Move much stronger, but that was about it.

This made the Team one-dimensional and predictable because SP SSJ2 Youth Gohan RED was its only chance of victory.

Also, the Team lacked some diversity and Tanking to make the Team more foolproof.

These short-comings made it fall short compared to Teams like Regeneration, Future, Female Warrior, and Super Saiyan.

Legends Step Up Vol.3  brought some new Son Family Fighters. The most highlighted one was SP SSJ Kid Goten PUR since, just like SP SSJ2 Youth Gohan RED, he had a Legendary Finish Ultimate Move.

This is not where the comparisons between the two end. In fact, SP SSJ Kid Goten PUR’s toolkit resembles his brother’s in the sense that he’s capable to inflict astonishing Blast Damage. Thanks to this, the Team now has two Fighters that can carry it throughout a Match.

Secondly, SP Otherworld SSJ Goku YEL is exactly what the Team needed in terms of Support as a Goku variant with good Defense and situationally, decent Offense that makes the Team exponentially stronger thanks to his Defeated Boosts, on top of the Boosts the other Fighter simultaneously get through their Unique Abilities.

Last but not least, SP SSJ Teen Gohan BLU may not be a core Fighter for Son Family, but he’s a great ace in the hole as he’s the best Blue option and he’s a fantastic Tank with a great Team-Healing Main Ability.

State of the Team Now

Thanks to these additions, all of the problems I’ve highlighted before have been fixed. The identity crisis is gone, as now the Team has two fantastic Blast-centric Fighters with the perfect Support to help them, and enough diversity to handle most matchups without trouble.

The way things are now, Son Family arguably stands at the top, as its winning consistency is higher than any other Team except maybe Regeneration, which gets countered by Son Family quite heavily due to SP SSJ2 Youth Gohan RED being the worst menace possible for it.