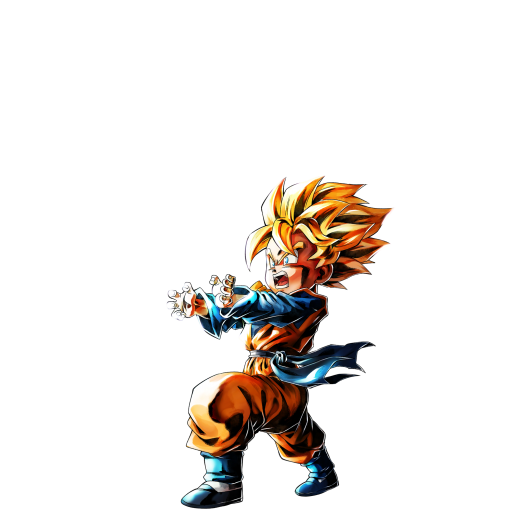 SP SSJ Goten PUR joined alongside his father and brother in the recent Legends Step-Up Vol. 3 banner, and the three of them brought the a under-supported Son Family Tag into relevance. In the current Meta, SP SSJ Goten PUR's relevance has fallen to the wayside, as his main Tag has shifted to a more Strike-oriented focus.

This Goten variant is an extremely volatile Ranged Fighter that will punish any mistake and likely take anyone down very quickly due to his absurd Damage output. His Ultimate Move is the second Legendary Finish added to Dragon Ball Legends, and it’s as painful as it is aesthetically pleasing.

Goten might not be the best Son Family Supporter anymore, but what he offers his Team is still excellent and absolutely can find success in the current Meta.

SP SSJ Kid Goten PUR requires a specific Team to really show off his full potential, but this Team is not hard to formulate. He’s rewarded for being paired with any Gohan variant with a nice Damage inflicted Unique Ability, as well as an instant 50 Ki Restore on entry.

Per Son Family Fighter that's serving as a battle member, Goten receives +20% Blast Damage, +10% Ki Recovery, and -2 Blast Arts Cost. When this is active alongside the 50 Ki Restoration Goten gives himself when entering the battlefield with a Gohan Teammate, he's one of the best Offensive Pivots in the Meta.

All three of us!

His Ultimate Arts Card – Family Kamehameha – does a few things. It’s not just a nuclear bomb, it Buffs any Gohan variant when activated, giving him even more Damage inflicted and some increased Ki Recovery Speed as well.

These Buffs even activate if Goten dies before the 25 Timer Count mark, which ensures that all Son Family Allies are made significantly stronger no matter what if he's deployed.

Attached at the hip

While putting together a Team to help him shine is currently not difficult, he requires living Son Family Allies, as well as a living Gohan Ally, to function Offensively. In Crisis situations, Goten is next to useless unless a Goku Fighter dies prior to the Last Man Standing situation.

Essentially, all this equates to a Fighter that requires both Gohan and Goku to achieve his peak potential. Goten falters when he's in Team compositions without those Fighters.

This is the obvious choice here; he benefits from other Son Family Fighters as well as a dead Goku variant tremendously.

He Synergizes outrageously well with SP SSJ2 Youth Gohan RED. Both are Blast-focused, form a nice core Color-wise, and have reduced Blast Arts Card costs which is a huge benefit to their held Blast Arts Cards.

Essentially just a Son Family Team that foregoes any Goku variant. On these Team comps, SP SSJ Kid Goten PUR misses out on the Blast Damage Buff that he gains if any Goku variant is killed, so without a Goku variant present, his Crisis utility is non-existent.

While that’s certainly valuable, it does also open up the door to a dual Z-Ability Buff on the bench from SP SSJ Kid Goten GRN or SP SSJ Kid Trunks YEL, or even a Health Z-Ability via SP SSJ3 Gotenks YEL or SP Kid Gohan YEL.

Unfortunately, the use of these Fighters on Bench restricts some battle options, as popular non-Sagas From the Movies Son Family Fighters cannot benefit from those Z abilities. Regardless, this team build is a great option for players looking to capitalize on SP Goku GRN's incredible tooklit.

His very own exclusive Equip is an absolute must have. His Ultimate Move and Blast Attacks become even more of a nuclear bomb, and it provides him with some excellent Defensive Boosts as well.

SP SSJ Goten PUR does disgusting amounts of Damage via Blast, so ideally two Blast Attack rolls on this Equip would be best.

This is the optimal choice for Goten, boosting his survivability as well as his Ultimate Move.

SP SSJ Kid Goten PUR needs a specific Team around him to really shine, but if provided with the right Teammates, he can unleash a ton of Blast Damage.