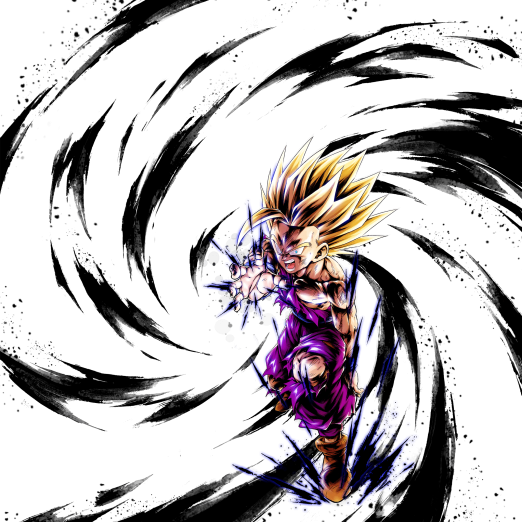 The prodigal son returns! After his earth-shattering Zenkai Awakening, SP SSJ2 Gohan RED has regained the title of the Best Fighter in the Game, shaping the entire meta in his wake, and the Son Family tag he leads has ascended to greatness once again.

His Damage Kit is beyond exceptional, with a near perfect Main Ability, Crisis Utility, Ki Recovery, and scaling Inflicted Damage Buffs that exponentially increase the efficacy of his Combos, to the point that they can obliterate even fighters with Color Disadvantage. His Ultimate Arts Card is in the running for the strongest Attack in the game, and its Endurance negation makes it more powerful than the Rising Rush.

Gohan's Tag-hate utility is incredibly relevant today, as in a Meta rife with regenerating menaces, his Cover change, consistent reduced Damage and increased Damage from and against Regeneration Fighters respectively trivializes the match-up.

Just when we thought his Day of Fate has passed, the first Super Saiyan 2 blasts back into the meta, firmly establishing himself as its ultimate threat. No Fighter does as much as Gohan at once. No Fighter has ever come close.

Offensively, SP SSJ2 Gohan RED is the most brutal threat in the game in every stage of the match. He gains a +20% Inflicted Damage Boost for 20 timer counts every time he uses a Blast Card, and a +30% Blast Damage Buff whenever his Cover Change effect wears off.

Beyond that, with 2 Hybrid Saiyan or Son Family Allies, Gohan is rocking +40% Blast Damage whenever he enters the battlefield, and his second Zenkai Unique Ability grants him an additional 25% Inflicted Damage and 40 Ki when he faces a foe.

While Blast has historically been seen as Offensively inefficient, SP SSJ2 Youth Gohan RED's Blast Cards are eternally discounted by 5 Ki, letting him safely unload his hand whenever the opportunity arises.

Taken together with Gohan's ample supply of Support Fighter allies, his Ki Recovery, his Scaling Damage, his Cost Reduction, and his Zenkai Stats, Gohan's combo Damage is simply unrivaled.

SP SSJ2 Youth Gohan RED has absurd Defensive stats and some great Abilities that easily allow him to function as his Team's primary Defensive Fighter.

His Cover-esque Ability allows him to reduce Damage received by 40%, which might seem standard at this point, but the fact is that his Stats, excellent Equip Options, and increased Damage Reduction against Regeneration foes makes him one of the game's most durable units, especially in that match-up.

He also can Heal by 40% thanks to his Main Ability, which comes packaged with one of the most enviable effects in the game - 20 Timer Counts of Element Disadvantage Negation if a Teammate has died.

That's not all the Defensive Utility Gohan is packing, he also recovers his Health by 20% as the last fighter alive, and both that ability and his Extra Arts Card cure Attribute Downgrades and Abnormal Conditions.

This ability makes switching the kid wonder in and out a breeze. His Ki 40 Ki Restoration whenever he faces a foe means that if a foe with color advantage tries to curtail Gohan's rampage with Cover Change, Gohan can swap out to retain the Ki Advantage, as well as pass Blast Damage and Ki Recovery to an ally capable of dealing with the new enemy.

All of this serves to make controlling Gohan as smooth as possible.

As a Crisis Fighter, his power becomes dominant. His Inflicted Damage and Ki Recovery become Buffed by 40% and 30% respectively per defeated Battle Member, and with a Son Family Fighter downed, Gohan gets an extra 100% Damage attached to his Ultimate Arts Card.

Zenkai 7 SP SSJ2 Gohan RED's kit is so stacked with powerful effects that it's difficult to succinctly enumerate them all. Gohan's Special Move's Massive multiplier makes it one of the strongest Attacks in the game given Gohan's Buffs and stats. His available equipment perfectly supplements his already broken stat-line. There's no single area where Gohan fails.

As the final Fighter Alive, Gohan's permanent, un-cancellable 30% Inflicted Damage Buff ensures that Buff Removal Effects won't sting nearly as much as they used to.

Gohan doesn't even have Team issues. He carries the under-appreciated Blast Fighters on the Son Family and Hybrid Saiyan Tags to the forefront by himself, and his Blast Attack and Ki Recovery Buffs turn them into threats contextually more deadly than Gohan himself.

This is the first Fighter in the game's history that has no faults.

The Son Family Tag that Gohan once spearheaded now bends over backwards to accommodate him. Though it had a more Strike-oriented identity for a while, Gohan completely revolutionizes the Tag and brings it back to its roots. Strike is out; Blast is in, and luckily, Son Family has the Fighters to make it work.

The Tag still uses fighters like SP SSJ4 Goku PUR, and Zenkai 7 SP Kid Goku YEL, but now its focus has shifted to a more blast-oriented approach, with the likes of SP Gohan BLU and SP Super Kaioken Goku GRN taking center stage. The synergy between these Fighters is phenomenal, and they can all perform exceptionally with Zenkai Gohan's Offensive Buffs behind them.

Hybrid Saiyans are in a bit of a weird spot, with several good core Fighters, but almost all of them very strongly emphasize one form of Attack and don't synergize with other Hybrid Saiyans. Zenkai Gohan ameliorates that by completely tossing out their previous identity of Strike-based Buff passing in favor of a Blast-oriented approach.

SP Teen Trunks PUR acts as an excellent Supporter for Gohan, and Gohan returns the favor by protecting him from Yellows and Supporting his Future friend in the Blast department.

SP SSJ Teen Gohan GRN is a great aid for the original Super Saiyan 2, as protects him from Blues and Supports his Offense. This combination enables Gohan's fantastic 100% Ultimate Damage Buff, and the additional Support is always appreciated.

SP SSJ Future Trunks YEL's excellent defense makes him a decent pivot option when the situation calls for it, and he also enjoys Gohan's Blast Buffs. The same can be said of Zenkai 7 SP Kid Trunks BLU, an often overlooked Fighter who can supplement the Team's options in the late-game.

The Team is just overflowing with options. SP SSJ Youth Gohan YEL, SP Gohan BLU, and Zenkai 7 SP Teen Trunks RED are all solid Fighters that work well with Gohan, mainly because Gohan is pulling most of the weight.

Awakened Believe in yourself, Gohan! No. １

A tailor-made Equip for Gohan, significantly boosting many aspects of his kit, making it a must-have.

A must-have Pure Equip for Gohan, providing a very large total Pure Blast and Strike Buff. The Awakened aaaah! is an option for a replacement where Gohan is not paired with any Hybrid Saiyans